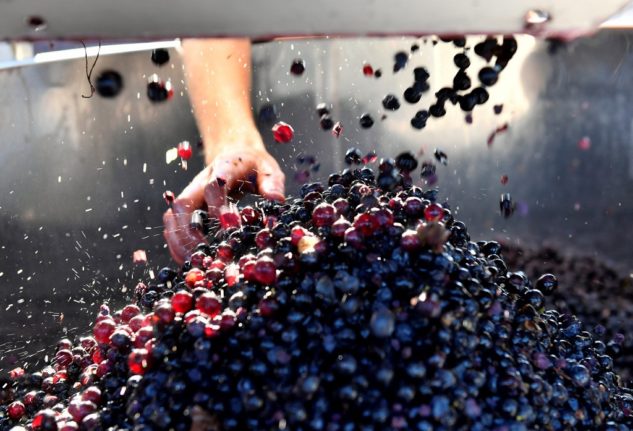 Grapes are seen in a during the harvest of the Chateau Angelus Saint Emilion vineyard, in 2018 in Saint-Emilion. (Photo by GEORGES GOBET / AFP)

“It’s the reward, or the non-reward, for your work,” Thunevin, a relative newcomer to this revered corner of Bordeaux, said among his manicured rows of vines laden with grapes just days from their harvest.

The assessment, held every ten years, aims to encourage more of the vintages that make Saint-Emilion one of the world’s most sought-after wines, with bottles that can fetch hundreds, if not thousands, of euros each.

Yet recent rankings have been bitterly contested by estates who say that marketing — having a cellar designed by a star architect, or placing your bottle in a Hollywood blockbuster — now counts as much as how a wine actually tastes.

The rancour deepened after three of the current top four estates — Angelus, Ausone and Cheval Blanc — surprised everyone by pulling out of this year’s rankings altogether.

Ausone’s owner Alain Vauthier told Le Monde newspaper he was riled by requests for favourable press clippings and hints he  should invest in tourist facilities like parking spaces. “This totally contradicts our environmental efforts.”

Others suspect jealousy of new arrivals, or fears of being demoted despite providing hundreds of pages of documentation alongside their bottles.

Whatever the reasons, the controversy could leave wine fans wondering what a Saint-Emilion ranking really amounts to.

“It’s such a big deal but it’s just become increasingly confusing for anybody on the outside,” the British Bordeaux expert Jane Anson said.

“And it’s fair to say it’s a system that doesn’t seem to be pleasing anyone at this point.”

Truth in the glass?

The rankings began in 1955, when owners created a more restrictive Saint-Emilion Grand Cru appellation that called for lower density yields and other restrictions to ensure the distinctive taste by the soil and climate, which combine to make up the “terroir.”

Making the grade secures a reputation and allows premium pricing, but more important is the boost to land values in what has become one of the most coveted wine parcels in the world.

“No other wine-growing region has dared to create a ranking system that gets revised every 10 years — you’re constantly being challenged,” said

He dismisses claims that taste matters less these days — “The truth is always in the glass!” — but believes that investments to promote the wines and attract more tourists will benefit all vineyards and the regional economy as a whole.

“We have a million, a million and a half visitors a year” to the medieval city and its surroundings, deemed a UNESCO World Heritage Site since 1999, Galhaud said.

“It’s good that we encourage our winemakers to open their doors.”

Thunevin, whose Chateau Valandraud wines were catapulted to Premier Grand Cru B in 2012, has since built an onsite hotel alongside a sparkling modern cellar topped with solar panels. Rentals for wedding receptions are already being booked for next summer.

“It certainly changed how my banker looked at me! I had a lot of debt and now he knew the money was backed by something with real value,” he said.

His nine hectares dedicated to Valandraud are worth an estimated €10 million each, “and if tomorrow I’m a Premier Grand Cru A, it could go up to €20 million.”

“That’s why there’s so much talent and people coming in from all over the world,” he said.

But other top estates now belong to multinational firms or their owners including LVMH for Cheval Blanc; the insurance group Scor; the Dassault family of military contractors; or more recently wealthy Chinese.

“These days it’s the CAC-40 in the vineyards,” said Nicolas Despagne, whose family hails from Saint-Emilion, referring to the Paris blue-chip stock index.

He makes organic wine just over the hill in Montagne-Saint-Emilion, while his brother manages the Chateau Grand Corbin Despagne, which is hoping to see its Grand Cru Classe ranking confirmed.

“A family estate has to compete but it doesn’t have the resources of a billionaire who walks in and says, ‘How much to make it bio-dynamic — a million euros, or two or three or five, or 10 million? Here you go, plant some trees!’,” he said.

Another historic estate that pulled out of this year’s contest, Croque-Michotte, denounced in June “a ranking of companies and not wine, made for investors and not consumers.”

Croque-Michotte was one of several who filed lawsuits over the 2012 rankings, and although they lost their final appeal earlier this year, it raises the spectre of new legal wranglings after Thursday’s announcement.

But over 140 estates are believed to have applied to France’s INAO appellations board for a ranking, up from around 90 ten years ago, a sign for Galhaud that owners increasingly value the healthy competition.

“I have friends with simple, unpretentious vineyards, they haven’t built fancy cellars, who got ranked in 2012 and I hope they will still be this year, or even promoted,” he said.

“Saint-Emilion is a family affair, and in a family there are people who get along and people who don’t… But we’re looking to the future, and this ranking is going to prove its worth.”