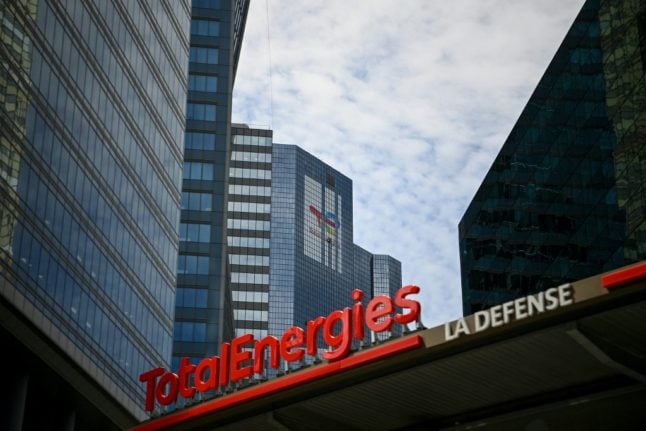 This file photograph shows the TotalEnergies logo at a charging station in La Defense on the outskirts of Paris. French daily Le Monde this week reported the alleged refining of natural gas condensates from a Russian gas field partly owned by TotalEnergies into jet fuel for fighter-bombers involved in Russia's assault on Ukraine. Photo: Christophe ARCHAMBAULT / AFP

The company said that it had signed a deal on Friday with its local Russian partner Novatek to sell its 49 percent in the Termokarstovoye gas field “on economic terms enabling TotalEnergies to recover the outstanding amounts
invested in the field.”

It said the divestment had been agreed in July and submitted to Russian authorities in early August, with approval coming on August 25.

That was the day after an article appeared in French daily Le Monde reporting the alleged refining of natural gas condensates from Termokarstovoye into jet fuel for fighter-bombers involved in Russia’s assault on Ukraine since February.

TotalEnergies — formerly Total — owns 49 percent of Terneftegaz, the company that extracts gas from the Termokarstovoye field.

The other 51 percent is held by Novatek, in which the French firm also holds a 19.4 percent stake.

TotalEnergies initially said it had no control over the sales of its Russian partner.

On Friday, it said Novatek had denied that its condensates were being refined into Russian military jet fuel.

Instead, they were sent to processing at a refinery whose products are exclusively exported outside Russia, a Novatek statement relayed by the French firm said.

TotalEnergies also said it was considering legal action in a bid to end an “unfounded controversy which is damaging the reputation of the company.”

Clara Gonzales at Greenpeace France said that the Termokarstovoye sale must not be a “smokescreen for the ongoing commercial relations of TotalEnergies in Russia,” and called for it to offload its stake in Novatek which “supplies the Russian army”.

“We are grateful to (French President) Emmanuel Macron and the French people for supporting Ukraine. Against this background, it is a disgrace to France when French companies assist the murder of Ukrainians and the ruining
of our cities,” Ukrainian Foreign Minister Dmytro Kuleba tweeted Friday. “TotalEnergies, pull out of Russia!”

Le Monde reported Wednesday that condensates from Termokarstovoye were being sent to a refinery that had provided 42,700 tonnes of fuel from February-July sent to airbases hosting Russian planes.

They accounted for more than eight percent of the raw materials received at the refinery in Omsk since the invasion of Ukraine, it added.

Citing data from financial information firm Refinitiv, the newspaper said the jet fuel shipments could be tracked back to the by-products from Termokarstovoye.

Novatek said via TotalEnergies that all condensates from the gas field are “delivered to the Ust-Luga processing complex in the Leningrad region.

“The range of products derived during processing at the Ust-Luga complex includes jet fuel that is exclusively exported outside Russia, and it does not even have the certification to be sold inside the country”.

TotalEnergies is the only major Western energy group to continue its operations in Russia, which accounts for 16.6 percent of its hydrocarbon production and 30 percent of its gas.

Chief executive Patrick Pouyanne had said in March that Russian gas fields exploited by the company’s joint ventures “are going to operate whether I leave or not” and are vital for supplying energy to Europe.

Selling TotalEnergies’ assets at knock-down prices would amount to handing billions to Russian investors, he argued.

But the firm has since announced a partial withdrawal from Russia, including stopping financing the Arctic LNG 2 gas project.

In July, it sold its 20-percent stake in an Arctic oil field to Russia’s Zarubejneft.

READ ALSO: Air-con, ties and lights: How Europe plans to save energy and get through winter without blackouts