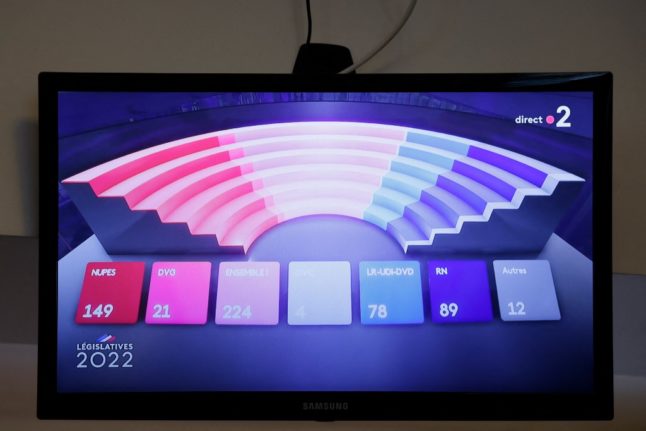 The French parliament has no absolute majority. Photo by Ludovic MARIN / POOL / AFP

After a summer break, government business resumes in France in September (la rentrée) and the lack of an absolute majority in parliament for Emmanuel Macron means that things could get messy.

In order to have a hope of following what’s going on, you’re going to need to know who the various political parties are, what they stand for and who their friends (or at least political allies) are.

Macron was re-elected president in April and his second and final term lasts until 2027. But, in the parliamentary elections that followed in June, his party lost its absolute majority. Attempts to build a formal coalition failed and now Macron and his Prime Minister Elisabeth Borne must try to push through their ambitious legislative programme by building informal alliances on a vote-by-vote basis.

They succeeded in passing a few bills – such as the €65-billion package of financial aid to deal with the cost of living crisis – before parliament broke for summer, but the next items on the agenda are likely to prove a lot more controversial and divisive.

Here are the major players that you need to know about – and we’ve included the initials that they are generally known by in French media to help you make sense of headlines like the below alphabet soup.

This is Macron’s party, he created it from scratch in 2016 and in 2017 won the presidential election, before also winning a majority in the parliamentary elections  – a pretty much unprecedented achievement in French politics.

The party is centrist, described as “neither of the right or the left”, although critics say it moved further to the right during Macron’s first term. Many of the senior politicians in LREM are former members of the two traditional centre-right and centre-left parties of France. Macron himself served as a minister under the socialist president François Hollande, although he was never a Parti Socialiste member.

The party does not have an absolute majority in parliament but is still the largest party with 166 seats. It’s also part of an alliance – known as Ensemble – with two other centrist parties, which is the biggest group in parliament with 245 seats.

The ‘France unbowed’ party is another relatively new creation, formed in 2016 by the political veteran and former Parti Socialiste member Jean-Luc Mélenchon.

The party is usually described as ‘hard left’ – situated somewhere between Parti Socialiste and the Communists – and in both the 2017 and the 2022 presidential elections, Mélenchon came third (behind Macron and Marine Le Pen).

In 2022, however, he managed to better capitalise on his vote by forming the ‘left alliance’ known as Nupes (Nouvelle Union Populaire, Ecologique et Socialiste) and securing the second highest number of seats in the parliament.

LFI is the largest party within the Nupes grouping, and in total Nupes have 131 MPs, making them the second largest group in parliament.

However the alliance – comprising LFI, Parti Socialiste, Communists and Greens – is fragile with major disagreements on issues including the EU and nuclear power. Technically Nupes was only an electoral pact, not a formal parliamentary alliance.

The far-right Rassemblement National was founded in 1972 by Jean-Marie Le Pen and was then known as Front National.

Jean-Marie’s daughter Marine took over the party leadership in 2011 and changed its name to Rassemblement National (national rally) in 2018 as part of her long-term project to ‘detoxify’ the party. She also officially expelled her father, an outspoken anti-Semite and Holocaust denier who had repeated brushes with the law over his hate-speech.

She has broadened the party’s appeal and pitched herself as the voice of the ‘left-behind’ France abandoned by the elites, but in spite of her focus on issues like the cost of living, the party’s core policies remain far-right and anti-immigrant.

Marine came second to Macron in both the 2017 and the 2022 presidential elections, and recorded the party’s best ever result in the 2022 parliamentary elections with 88 seats. RN is the second largest single party in parliament, but it is not part of an alliance so it the third largest block.

The RN MPs have abstained in several key votes which has allowed Macron’s party to push through legislation, and leaked internal memos revealed that Le Pen was heavily focused on ‘respectable’ behaviour in parliament from her new MPs.

This is the traditional centre-right party and along with the centre-left Parti Socialiste it dominated post-war politics in France. It’s sometimes compared to the Conservative party in the UK and Republicans in the US, as much for its sense of permanence as its politics.

It has changed its name a few times, but it is in essence the party of Charles de Gaulle and numbers presidents including Jacques Chirac and Nicolas Sarkoy.

The party suffered a disastrous 2017 election after a major financial scandal involving its candidate François Fillon and since then has struggled to regroup and attract voters back. Its 2022 presidential candidate Valérie Pécresse scored a humiliating 4.78 percent of the vote.

It did slightly better in parliamentary elections and now has 59 MPs. However damaging splits have emerged between the right-wing of the party and the more moderate MPs.

The second half of the traditional post-war duo is the centre-left party Parti Socialiste, sometimes compared to the Labour Party in the UK and Democrats in the US for its established dominance (prior to 2017) – presidents François Hollande and François Mitterand were PS members.

Like LR, Parti Socialise was virtually destroyed in the 2017 election and has struggled to recover – its 2022 election campaign was disastrous and the candidate – Paris mayor Anne Hidalgo – scored less than two percent of the vote.

The party has 29 MPs in parliament, but is currently punching slightly above its weight through membership of the Nupes alliance.

France’s green party is becoming more and more influential at a local level, with cities including Bordeaux, Lyon and Grenoble now controlled by Greens, but it has struggled to translate this into success on a national level.

There are now 23 MPs for EELV or Les Verts – as the party is known interchangeably by French media – in parliament.

The party joined the Nupes leftist alliance, but has had to make some major compromises, since the staunchly pro-European party is now in a group with the anti-EU LFI and the pro-nuclear Communists.

The French communist party’s political heyday was in the late 1940s and 50s, but although its influence has declined since then there are still around 60 communes in France that are run by Communist mayors.

Many of the party’s former voters in the ‘rust-belt’ former industrial areas of north-east France have turned to the far right in recent years.

However its fortunes improved in 2022 when it joined to Nupes alliance. There are currently 22 MPs in parliament who are part of the Communist group (comprising PCF members plus members of communist parties in France’s overseas territories).

Officially called Le Mouvement démocrate but almost always known as MoDem, the centrist party was founded in 2007 by current leader François Bayrou. It was in partnership with Macron’s party during the 2017-2022 parliamentary term and remained on board, joining the 2022 Ensemble alliance.

It has 49 MPs, including several independent but allied MPs.

The newest party in parliament is Horizons, formed in 2021 by former prime minister – and current mayor of Le Havre – Edouard Philippe.

The exact purpose of the party was a little unclear when it was founded and it’s widely believed to be a vehicle for Philippe’s expected 2027 presidential bid, but for now it’s part of the Ensemble coalition with Macron’s party and MoDem.

It’s generally regarded as centre-right – Philippe himself was a member of Les Républicains before becoming Macron’s prime minister in 2017.