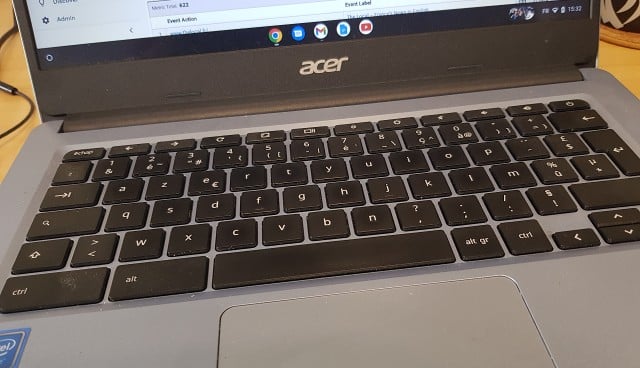 The keyboard, which is only used in France and Belgium, is named after the order of the first six keys (as is the more common QWERTY keyboard).

Some of its differences to the QWERTY keyboard are completely logical, such as prioritising the é, ç and è keys which are used all the time when writing in French.

But some of the differences seem completely illogical and designed to designed to make typists tear their hair out especially if – like many new arrivals to France – you have to change your typing style having grown up using the QWERTY keyboard.

I will never stop marvelling at the fevered mind that came up with the AZERTY keyboard. Bless this crazed person who needed a semi-colon more than a full-stop.

The placement of the letters

The differences are few when it comes to the actual letters of the alphabet: The A and Q are switched, as are the Z and W, and the M is transferred to the end of the middle row, rather than at the end of the bottom.

But that’s still enough to make for some frustrating weeks when you transfer from a Qwerty to an Azerty – or if you’re trying to use a French’s friend computer to send a quick email.

If you’re not careful, “a quick pizza” can turn into “q auick piwwq”, for example.

The reason the letters are in a different order remains unknown, as is much of the reasoning behind the buttons on French keyboard, which took off in the early 20th century according to French historian Delphine Gardey.

French speakers in other countries like Canada actually prefer the QWERTY keyboard.

It is worth noting, however, that the letter Z is much more common in French than it is in English, and the Q occurs slightly more frequently too.

Numbers are not prioritised

Writing the numbers on a French keyboard requires using the shift key each time.

The top line of the AZERTY keyboard features the special characters needed to do accents such as é è ç and à, as well as common punctuation such as as brackets and dashes.

It also features numbers, but the numbers are all on the shift key.

The French language has a much, much higher usage of accented letters compared to English. In fact, most English writers don’t even bother adding things like an accented e to words like café or fiancée anymore.

In French, however, the é is more frequently used that a whopping ten letters in the alphabet. It makes sense to give it a key to itself, especially compared to y, w, z, and x.

However this does mean that every time you need to type a number you are using the shift key – and certain UK or US based websites won’t allow you to enter characters in say – the box for your credit card details – if you are holding down the shift key, making shopping and admin on non-French websites particularly annoying.

The @ symbol might have started out as a relatively obscure symbol, but in the days of email and Twitter it’s needed all the time, while one could argue that France’s official currency would be a pretty useful symbol to have.

On the other hand ù – a letter used by the French just 0.058 percent of the time – gets its own key, just to the right of the ‘m’, while the dollar symbol also has its own key, presumably a hangover from the Qwerty keyboard as used in the US.

The underscore symbol (this one _ ) is another one that has seen its popularity vastly increase with the widespread use of websites, email, Twitter and Instagram where it’s a frequent feature of user names and domain names.

And in good news, it does have its own key – it’s right underneath the number 8.

In fact in French the dash and the underscore (- and _) are  sometimes called “tiret du 6” and a “tiret du 8” respectively, meaning a “six dash” and an “eight dash” because that’s where you can find them on a keyboard, although their formal names are just tiret and tiret bas.

Pressing shift to end a sentence

But surely the mostly baffling and irritating thing about the Azerty keyboard is having to use the shift key to end every sentence.

The much lesser-used semi-colon gets its own key, while if you want to end a sentence with a full stop or period – by far the most common way to finish – you need to employ the shift key. Likewise if you need the period point for an ellipse (…), a decimal point (although the French use a comma in place of a point) or any and all website addresses and email addresses.

Likewise the French are apparently fonder of jokes than they are of questions, since the exclamation point keys its own key while the question mark requires a shift.

The § symbol gets equal prominence with the . since both are accessible through a shift key.

We had to Google § to see what it even is, it’s apparently a section sign used for numbering legal documents, so we can only assume that a lawyer (who also hated full stops) designed the Azerty keyboard.

Obviously punctuation points have their own names in France, here are some of the most common

At symbol @ Arobase – so for example the email address [email protected] would be jean point dupont arobas hotmail point fr.