Photo by Justus Menke on Unsplash

It’s a bistro classic, but in a recent poll of Local readers steak-frites was ranked one of the most ‘over-rated’ dishes in France.

While there are undoubtedly restaurants producing badly-cooked and over-priced steak, especially in tourist areas, for some people the problem is either one of expectations, ordering or cooking.

So here are some things to know to get the perfect steak while in France.

There are of course several different cuts of meat on offer in most restaurants, while some of these translate directly others are different styles or cuts that are relatively unusual to find in the UK or US.

Entrecôte – this is the most common cut and entrecôte-frites (steak and chips) is available on most café or bistro menus – the cut is a ribeye.

The classic accompaniment is either green beans or a green salad, but many cafés serve it with no sides – if you see vegetables like haricots verts (green beans) or épinards (spinach) listed separately on the menu it usually means your steak and chips will come with no veg unless you order it.

Filet – filet steak. The most tender cut and usually the most expensive.

Bavette – this is hanger steak or skirt steak, which comes from the animal’s flank. It has a lot of muscle so it’s one of the chewier cuts, but has great flavour.

Onglet – another term for undercut or skirt steak.

Côte de boeuf – ribeye on the bone. A beautiful but large cut of meat, this is usually sold as a dish to share between two people, and even then you’ll need to have a good appetite.

Pièce du boucher – you’ll see this on a lot of menus but it isn’t actually a cut, it means ‘butcher’s choice’ and it varies depending on what’s in. It’s the steak equivalent of plat du jour (dish of the day).

Steak haché – literally ‘chopped steak’, this is actually minced beef. If you see it on a menu, it means a burger, not a steak.

Steak tartare (or tartare de boeuf) – this is steak that is chopped into small pieces and served raw, in a patty like a burger. Some foreigners find the idea of eating totally raw meat (often topped with a raw egg yolk) too much, but it’s actually delicious and very flavourful.

One of the main complaints that people have is that their steak is tough and it’s true that different farming standards in France mean that your steak is likely to be tougher than in the US.

Obviously if you can’t cut your meat then it’s too tough, but if it’s simply chewy then that’s OK – it usually means that the cow has moved around a lot more in its life and had the chance to develop some muscle.

The flip side to this is that more chewy meat usually has more flavour, so don’t immediately assume that having to chew your food is bad, but if you’re not a fan then go for one of the more tender cuts like filet.

Another issue for visitors to France is that French people generally like their meat quite pink so if that’s not your favourite then make sure to specify this when ordering.

Bleu – blue. This is barely cooked at all, the classic method for a bleu is 20 seconds on each side, so it’s basically a raw steak with a very thin crust of cooked meat.

Saignant – rare. This literally means ‘bloody’ and if you order your steak like this the inside will be red, not pink. It’s probably closer to what would be called ‘blue’ in the UK or US.

Mi-saignant – half rare. A less common order, but this is rare steak that is slightly more cooked, and has a little pink meat, but still a red centre.

A point – medium. If you order this your steak will be pink in the middle, not bleeding, with a well-cooked crust.

Rose – pink. This is the same thing as ordering à point.

Cuit – cooked. If you usually order a medium steak in the UK or US, you might find à point is too pink for you (it’s more equivalent to ‘medium rare’), so request cuit instead, which has just a touch of pink inside.

Bien cuit – well cooked. If you don’t like to see red or pink meat in the inside of your steak, then you need to specify that you want it ‘well cooked’ – ie brown all the way through.

There’s an urban myth that French chefs refuse to do ‘well done’ steaks but while there are doubtless a few divas out there, in most places it is of course the customer’s choice. Especially in tourist areas, service staff are well used to the fact that British or American customers like their meat ‘scorched’ so your request is unlikely to raise many eyebrows. Just don’t ask for ketchup to go with it, we beg you.

The below French cooking guide gives you an idea of what each order will look like, although of course this can vary between establishments. 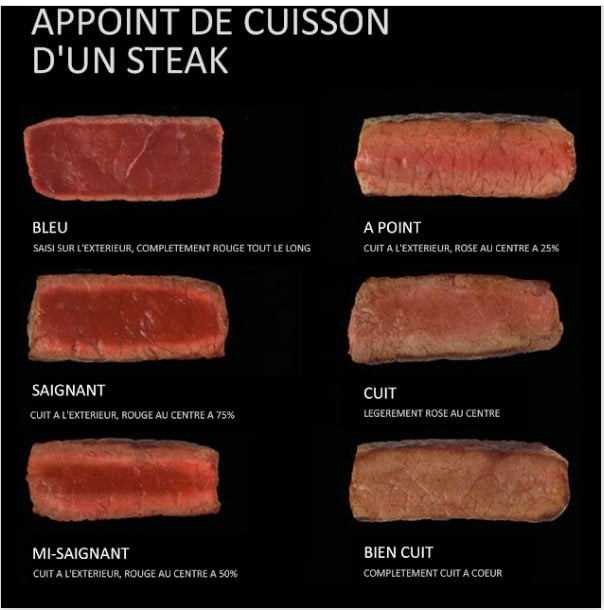 Serving staff will always ask how you want your meat cooked when you order, and you will get the same question if you order other meats, such as duck or lamb, or a burger. 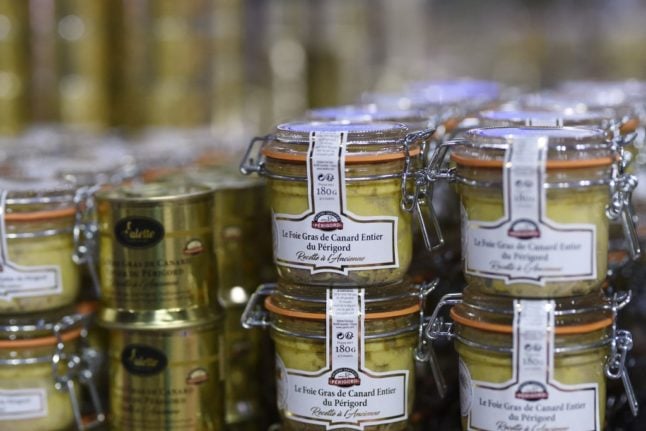