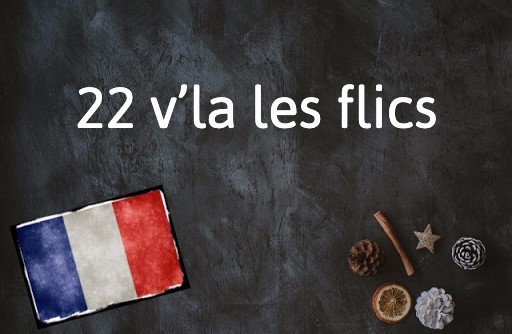 Because you might want to enjoy some old mobster movies, or alternatively keep up with the slang of the older generation in France.

In practice, older generations use this colloquial expression to alert members of a group when perceived danger (typically in the form of police) might be arriving – it is a form of alert.

It’s no longer common among younger generations, but a common place you would hear this expression would be in old mobster movies. A similar expression in English might be shouting ‘Five-O’ to warn of the arrival of police in the United States.

The expression itself originally came into use during the 19th century, so theories that it originates from ‘22’ being the previous number of the police before the current ‘17’ are incorrect, as the telephone did not arrive in France in a significant way until the 1880s.

The running explanation (though there are many) is that it goes back to the printing industry at the time, when linotype artists – workers in charge of composing the text to be printed – developed this code to warn others that the boss was coming. They would shout 22 (the size of font intended for headlines) to alert their coworkers.

You might also be wondering about the contraction “v’la” – this has a more simple explanation. It is short for voila (here is/are).

Over time, popular usage added les flics (the cops) at the end, as they are symbols of authority. It is still used – though mostly by the older generation.

22, v’là les flics ! Ralentissez, vous allez trop vite et vous allez vous faire arrêter. – Five-O, Five-O ! Slow down, you are going too fast and you will get pulled over.