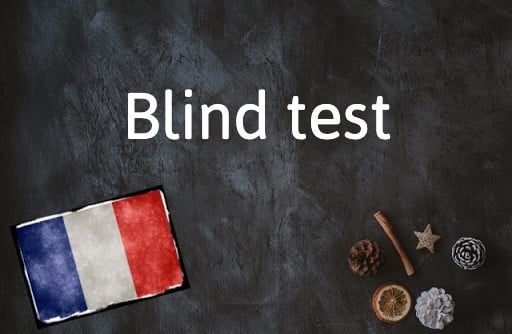 Why do I need to know blind test?

Because you might be invited to take part in one of these at a party, a dinner, or even a bar.

Blind test – pronounced bline-test – is an anglicism. It is derived from the English marketing expression ‘blind test’ where the consumer tries something without knowing the brand and attempts to recognise the product. The word in French, however, has nothing to do with testing out two different versions of chocolate chip cookies. In fact, the closest English synonyms for blind test would actually be ‘name that song’, ‘beat the intro’ or ‘music trivia’ quizzes – it’s when you’re invited to take part in a game involving guessing the title of a song, or the artist who sang it.

The story of how ‘blind test’ came to be the word French people use for ‘name that song’ games goes back to the 1980s. French TV host Thierry Ardisson popularised the blind test by quizzing his singer-guest, Étienne Daho, with the titles of random songs from the 1960s.

Ardisson went on to host ‘Tout le monde en parle’ which ran from 1998 until 2006, and consisted of a music quiz where contestants were divided into two teams and had to guess the artist behind each song.

The phenomenon became so popular that it spurred on more musical game shows and the phrase caught on for quizes and board games based on music.

So now, if you pass by a bar in France and it is advertising blind tests, you don’t have to scratch your head wondering why one might get their eyes checked at a pub.

Tu veux aller au blind test au bar du coin demain soir ? – Do you want to come to the music quiz at the bar around the corner tomorrow night?