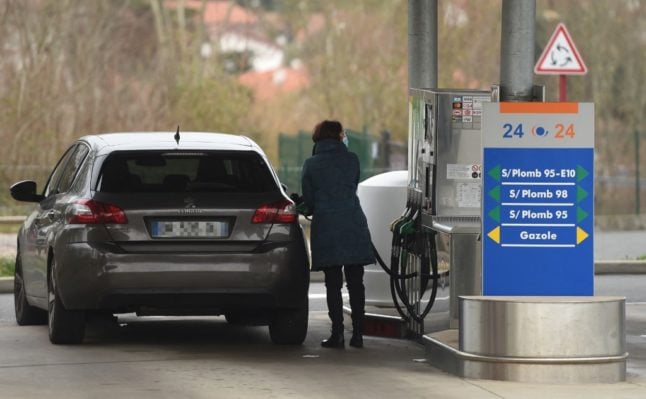 A client fills her car with gas at a petrol station in Ciboure, southwestern France (Photo by GAIZKA IROZ / AFP)

The chassé-croisé is upon us. It is the weekend when vacationers heading off to enjoy their holidays in August share the roads with those coming home from their July trips. This year, like years previous, there will be heavy traffic on French motorways, particularly on Saturday.

Luckily, there are a few options for drivers to save on fuel amid the long traffic jams – or simply take the chance to fill up locally if you’re not planning on travelling.

The grocery store chain E. Leclerc will be foregoing some profits this weekend by offering its fuel “at cost.” The discount will be available for customers at all Leclerc filling stations – of which there are about 600 –  from Thursday July 28th until Saturday July 30th. Keep in mind the discount will no longer be in effect on Sunday, July 31st.

The offer is intended to help consumers counter rising cost of living and inflation, particularly on one of the biggest driving weekends of the year.

In terms of savings, motorists should not get too excited, however. A litre of fuel might be around €0.02 to €0.10 cheaper at participating stations.

You can find a station near you HERE.

READ MORE: MAP: Where to find the cheapest fuel in France

The discount plan for consumers comes as France’s parliament debates the current fuel rebate, which could be increased from €0.18 to €0.30 per litre of gasoline from September 1st.

Head of E. Leclerc, Michel-Edouard Leclerc, has also announced that this may be the final ‘at-cost’ operation, arguing that such operations will no longer be possible when the new climate law takes effect on August 22nd. The law will regulate advertising related to the environment, including a ban on the advertising of fossil fuels.

Leclerc is not the only supermarket chain to offer fuel discounts. The Casino group will continue offering its discount until the end of August. As it stands, consumers can benefit from from a voucher card after spending €120 at the Casino store. The voucher can be picked up at the reception desk of any participating Casino store, and allows customers to get one litre of fuel at the price of €0.85.

The TotalEnergies group has also announced they will apply a fuel discount of €0.20 starting in September.

If you are looking to save on fuel, you can also use this map to avoid soaring prices.