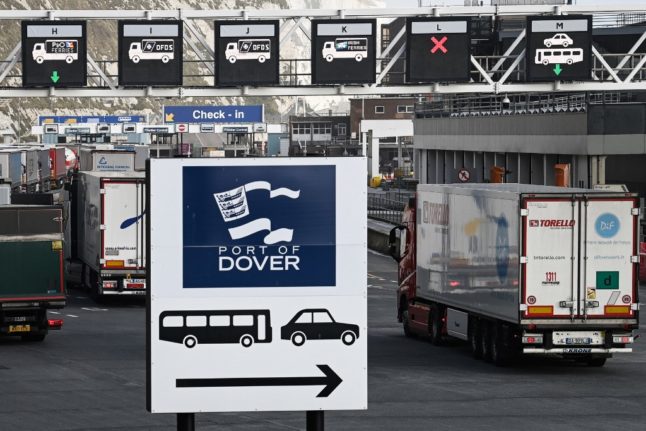 Holidaymakers at Dover were stuck in six-hour queues on Friday, July 22nd, and the chaos continued over the weekend with long waits at the Channel Tunnel terminal at Folkestone – but can we expect this to continue every weekend over the summer holidays? And what can we expect from the port of Calais when those British holidaymakers return home?

Heading into the second weekend of the summer holidays, Port of Dover bosses said they were confident there would not be a repeat of the six-hour queues, but added that passengers should expect “the normal 60-90 minute wait” to get through French passport controls.

On Thursday the British motoring organisation the AA issued an amber warning for the second weekend of the holidays.

Some of the causes of the July 22nd travel chaos were specific, primarily the number of passengers – the weekend represented the peak ‘getaway’ weekend after schools in England and Wales broke up for summer and was therefore always likely to be exceptionally busy.

Other factors in the chaos included serious crashes on the motorways leading to the port, and a transport issue that meant that some of the French passport-checking team were an hour late to work on Friday.

However some of the underlying factors are structural, which means that problems – albeit hopefully at a lesser scale – could continue over the summer.

Since the end of the Brexit transition period, the UK-France border is now an external EU border, which means that passport checks are a lot more rigorous than they used to be – and it’s important to point out that this isn’t a French decision, it’s the protocol for all arrivals into the EU from non-EU countries.

People who travelled pre-Brexit will remember that passport checks by French border officials were usually a fairly cursory affair, a quick glance at a passport if that.

However these days officials must check each passport for EU entry and exit stamps and stamp most UK passports – with the exception of carte de séjour or visa holders or those with a diplomatic passport. The reason for this is to keep track of the 90-day limit for non-EU visitors.

Covid restrictions in place last summer and at Christmas mean this is the first time that post-Brexit checks and a full capacity of passengers have coincided.

Travel expert Simon Calder, of UK newspaper The Independent, estimates that each passport checks for a family of four now take 90 seconds – while that doesn’t sound like a lot, if you have 10,000 cars (many with multiple occupants) at the port each day, it quickly adds up.

‘All the border check places are fully staffed.’

Worth listening to @SimonCalder on the queues at Dover caused by #Brexit #BBCBreakfast via @Haggis_UK pic.twitter.com/Bdkdl5YK9U

There are also extra paperwork checks for pets, since the EU Pet Passport is no longer valid for UK residents, and sporadic checks on goods being brought into the EU such as food, furniture or DIY equipment.

But while these type of checks take place at all EU external borders, there’s an extra issue at some UK ports – the Le Touquet agreement.

This is a bilateral agreement between France and the UK which means that French officials check passports in the UK and UK officials check passports in France. This agreement, dating from 2003, was put in place in an attempt to deal with the cross-Channel migrant crossings by having UK officials doing security checks in France before people can board transport to the UK – but the flip side of the agreement is that French officials are also based in the UK.

This means that when boarding a ferry or the Channel Tunnel, passengers go through two sets of passport control, British and French, which means that any issue – technical problems, computer failure, staff shortages – at one border has an instant knock-on effect on the other.

There are of course multiple exit points from the UK, but the two that get by far the greatest passenger numbers are the ferry port of Dover and the Channel Tunnel terminal at Folkestone – and both carry passengers and freight to France.

Both sites were built in a pre-Brexit era when checks were minimal and are now struggling to adapt.

UK media reported that the port of Dover requested £33 million from the UK government to update its facilities, but received only a fraction of that. This means that there is limited space for French officials to perform passport checks.

France’s foreign minister Catherine Colonna and the MP for the Calais area Pierre-Henri Dumont both flagged up port capacity as a major underlying issue.

Lord Peter Ricketts, the UK’s former Ambassador to France, told The Guardian newspaper: “The shortage of French border force officials is a short-term, tactical problem. The long-term, serious issue is that this is the first time we’ve seen the full pressure on the border after Brexit. Even if it was a full complement of the French border force there would still be massive delays, because Dover port can’t cope with the volume.

“The underlying reality is that no matter how many they have, given the size of the port, given the fact that the government failed to invest in expanding the facilities, it is going to be like this – this will be the new normal.”

As mentioned, both Dover and Folkestone carry freight traffic as well as passengers, and although the entry and processing area to both terminals is completely separate for the two types of traffic, problems with one can have knock-on effects for the other.

Lorries exiting the UK now face a huge amount of extra paperwork and ever since the end of the Brexit transition period there have been issues dealing with this.

In Kent ‘Operation Brock’ is put into place at peak times – this involves lorries destined for the Channel Tunnel queuing in the inside lanes of the M20 motorway, and frequently these queues can be seen stretching for miles. When the motorway is very busy with other traffic, the loss of inside lanes can slow it to a standstill – and this is what happened July 24th with holidaymakers waiting for hours in static motorway traffic.

The lorry issue has been ongoing ever since the end of the Brexit transition period in January 2021, and seems unlikely to be solved quickly.

In addition to passport checks, the additional check in place this summer is Covid-related – although the UK has ended all Covid restrictions, France still requires all arrivals to be either fully vaccinated or have recently tested negative for Covid, with checks done before boarding.

These checks are usually performed on a random basis, but appear to have been stepped up from the start of July, as France experiences a seventh wave of cases.

The tens of thousands of people who left the UK over the past few days will mostly be returning, so can we expect a repeat of the chaos at Calais?

It’s possible there will be delays especially on peak weekends given the sheer number of travellers who will be returning home. French passport officials will check and stamp UK tourist passports on the way out in Calais just as they did in Dover. UK Tourists should make sure they get a stamp so they are not considered an overstayer when they next return to France.

So the advice would probably be to arrive at the ferry or Eurotunnel terminal nice and early.

Calais port has seen quite extensive remodelling to deal with the effects of Brexit, with a €20 million investment in new systems, expanded processing areas and more staff – mostly aimed at dealing with freight traffic.

As with Dover, however, this summer will be the first time the French post-Brexit system has been tested with a full capacity of passengers, so it remains to be seen whether it will cope.

If you’re trying to avoid Channel ports, the alternatives for travel to France are taking the Eurostar from London to Paris or flying. Unfortunately, both of these travel methods have seen their own problems, with long queues at Eurostar stations (related to Brexit checks and staff shortages) and chaotic scenes at UK airports related to staff shortages.

The EU is planning a major overhaul of its external borders which will require travellers from the UK to undergo extra passport screenings and tourists to get a €7 visa.

These will add another layer of checks at the border, but the EU has delayed the introduction until at least September – after peak holiday season – and it’s possible that they could be delayed again or phased in over a period of months.

In a year marked by drought and heatwaves, rockfalls and gaping crevices have made access to the top of Mont Blanc, western Europe’s highest mountain, even more difficult and perilous.

The mayor’s office in the Mont Blanc village of Saint-Gervais, said climbers were in “mortal danger” from rocks and shards coming loose because of dry weather and dropping from a height.

“All day long, we still see climbers going on the mountain range, all the time, as if this was Disneyland or the Parc Asterix,” said Saint-Gervais mayor Jean-Marc Peillex, in reference to two popular theme parks near Paris.

Hikers had been advised since last month to stay away because of the danger, but “they just don’t give a damn,” he told AFP.

The closure of the two mountain shelters — Gouter with 120 overnight spots and Tete Rousse with 74, as well as a base camp accommodating up to 50 people — was to “show clearly that there is no accommodation available”.

The authorities had warned for weeks that falling rocks were a danger, he said, adding that crossing the Gouter mountain corridor represented “a mortal danger”, he said.

The shelters will remain shut until normal weather conditions return, the mayor said, probably not before early September.

Peillex had warned Wednesday that Saint-Gervais would require a deposit of €15,000 from each hiker, saying the sum represented the average cost of a rescue operation and a funeral.

He was, however, advised that French law offers no basis for such a move.

A lack of snow during the winter has laid bare vast areas of greyish glacier — yellowish where sand dust from the Sahara has accumulated — riven with fractures on the Mont Blanc.

The heat did the rest, causing the fragile snow bridges to melt that make it possible to cross the crevasses, as well as leading to landslides.

Following several heatwaves, France is in the grip of severe drought, blamed by scientists on climate change.

On Friday, 100 municipalities across the country were without drinking water, Environment Minister Christophe Bechu said.

Scientists say human-induced climate change is amplifying extreme weather — including the heatwaves, droughts and floods seen in several parts of the planet in recent weeks — and say these events will become more frequent and more intense.

The international community has agreed that climate change poses an existential threat to human systems and the natural world. 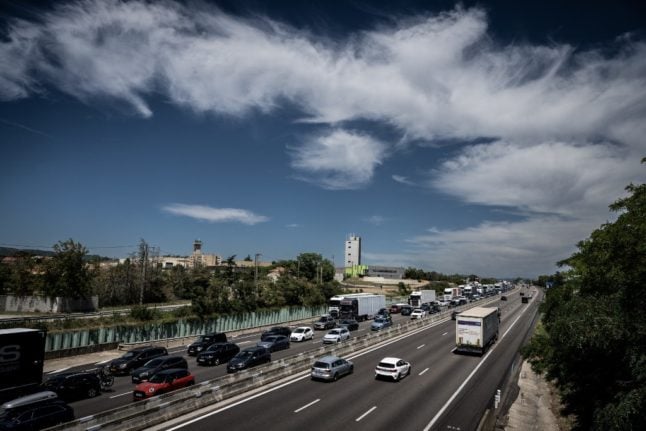