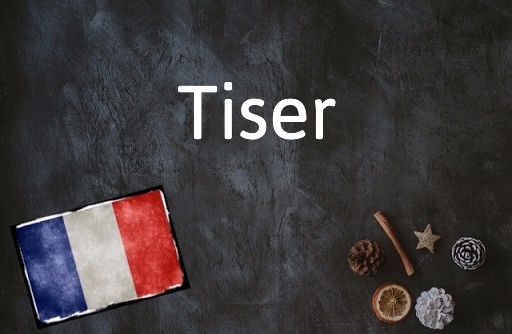 Why do I need to know tiser?

Because you might find yourself wanting to employ this verb more than usual while making the most of your holidays this August.

Tiser – pronounced tea-zay – is a French -ER verb and its definition is ‘to put fuel in an oven or furnace.” However, you’re pretty unlikely to hear it in that context these days. In recent years, the verb has become argot (or slang) for drinking alcohol, so be careful with your pronunciation because it sounds quite similar to the word for herbal tea (tisane).

Tiser is conjugated like a normal -ER verb, so in the past tense, if you say ‘j’ai tisé’ that would mean you drank alcohol. You can also refer to alcohol generally as ‘la tise.’

Though it is quite fashionable right now, the term, as you might have guessed, goes back centuries. According to the French language dictionary, tiser was originally used within the glass industry. It is derived from the Latin word “titio” (which means firebrand or a piece of burning wood), and over time shifted to become the verb “to stir.”

In the 18th century, tiser was primarily used in industrial settings to mean introducing fuel into a melting furnace, and over time the filling of the furnace became a metaphorical way to describe filling your body with a different type of fool: alcohol.

Je vais arrêter la tise pendant un mois pour donner à mon corps une pause. J’ai l’impression d’avoir trop bu ces derniers jours. – I am going to quit alcohol for a month to give my body a break. I feel like I’ve drank too much these past few days.

J’ai trop hâte, il loue une maison à la campagne. On va tiser, danser et passer un bon moment ! –  I am so excited that he rented a house in the countryside. We’re going to drink, dance, and have a great time.