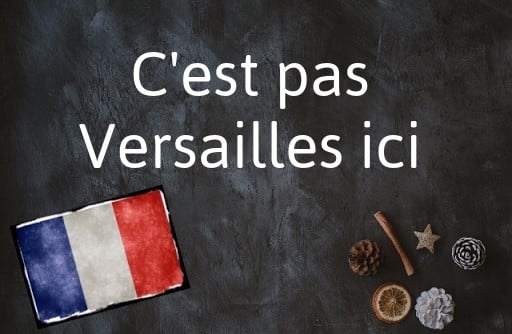 Why do I need to know C’est pas Versailles ici?

Because it’s a classic grumpy-dad phrase, but it’s likely to become more topical this winter.

Most countries have their own version of this, especially within families when kids insist on leaving the lights blazing away in every room, even those they’re not in, the bill-payer will shout something like ‘turn the bloody lights off, do you think I’m made of money’.

But sometimes a location is added too, in the UK the classic phrase is ‘it’s like Blackpool illuminations in here’ – referring to the famous light show in the northern seaside town.

But in French the phrase is ‘it’s not Versailles here’ – referring to the famously beautiful royal palace of Versailles on the outskirts of Paris.

It’s so well known that Total Energie even used it in an advertising campaign.

As home of famously extravagant French queen Marie-Antoinette, Versailles became a byword for luxury and high-spending. These days the Palace is mostly a tourist attraction, but it’s still used by the French government to host certain important state events and international summits and retains its image as a place of luxury and high-spending (and with 775 rooms we imagine their electricity bill is pretty high).

As energy prices rise and the French government urges everyone to make daily gestures to limit their energy-consumption, the phrase is likely to become common in the months to come.

As the video above shows, the phrase is usually used on its own, often accompanied with the flick of a light switch, but you could also say