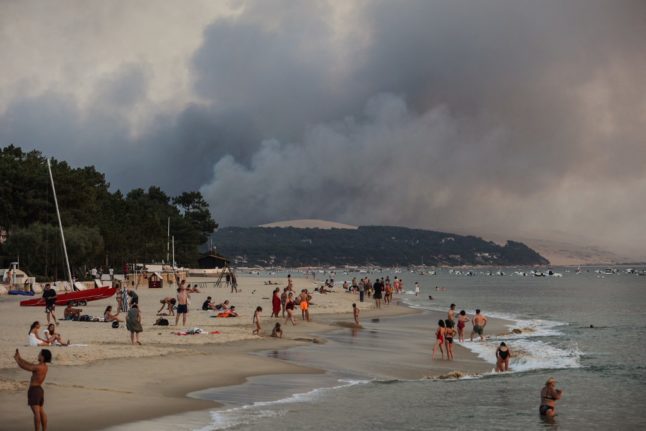 France's Moulleau's beach as smoke rises from the forest fires in the south west. Photo by THIBAUD MORITZ / AFP

After the wind changed on Monday evening, people all over south west France woke up on Tuesday morning to the smell of smoke from the fires raging.

The départements of Charente, Dordogne, Gironde, Lot-et-Garonne and Vienne are affected, according to the country’s air quality monitor, and many of the inhabitants in those areas have complained of sore throats or mild respiratory symptoms. 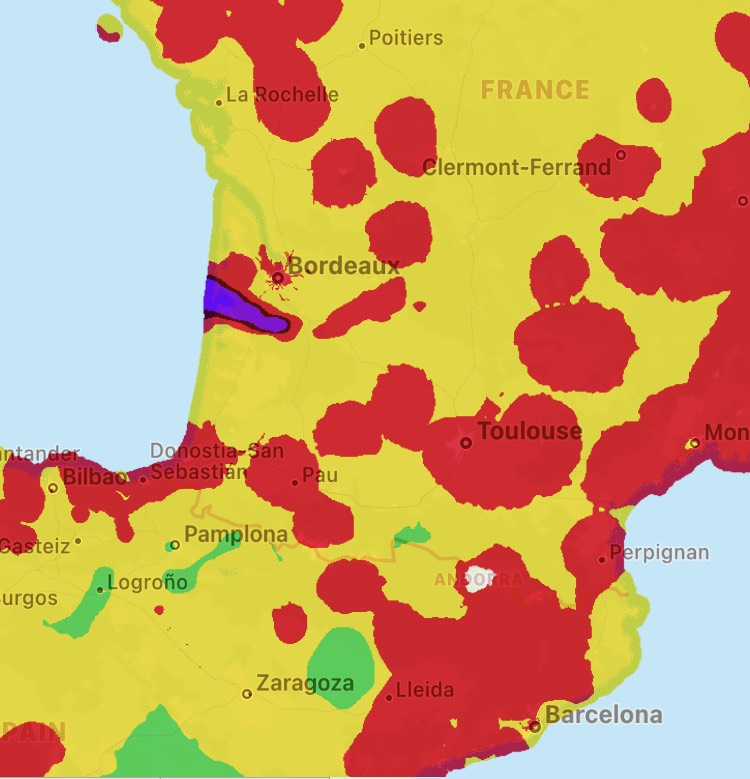 Cities including Limoges, La Rochelle and Bordeaux are affected.

In Bordeaux people posted pictures of the weird, glowing smog that covered the area on Monday night.

The sky over #Arcachon tonight. Lots of smoke in the air from #wildfires raging only few kilometres away. Thousands more evacuated today and over 15 hectares of burned forest in the #Gironde region in southwestern #France. #FeuxDeForêt #LaTestedeBuch pic.twitter.com/4nSSrFgnZJ

So if you can smell smoke what should you do?

The first thing is obviously to keep an eye on wildfire updates to make sure you are not in danger from a nearby fire – you can sign up to the government emergency text alerts or just keep an eye on local news.

A total of 39,000 people have now been evacuated from the immediate vicinity of the fires.

If you are far enough away that you do not need to evacuate, you are asked to avoid calling emergency lines, after hundreds of people called overnight on Monday due to worries about the smoke.

“Avoid clogging the telephone lines of the fire department, contact them only if you identify a fire”, the préfecture of Dordogne told France Info.

Health authorities have reassured the population that for most people, being able to smell the smoke is not dangerous and symptoms such as sore throats are annoying, rather than risky.

But the regional health authority (ARS) added that at-risk groups should be vigilant.

“Particularly concerned are people with a respiratory history such as asthma, chronic respiratory insufficiency or other respiratory pathologies, as well as the people with cardiac problems, for whom the irritating effects of fumes can worsen their condition”.

Employers of staff working in the open air are also “invited to be vigilant, and if necessary to refer to their occupational health service.

“For a simple sensation of odour and/or irritation of the upper respiratory tract, it is not necessary to see doctor, or call the emergency number 15,” added the ARS.

On the other hand, for persons at risk who are experiencing respiratory discomfort, you are advised to contact a general practitioner. If symptoms or discomfort is intense, “contact the emergency number 15.”