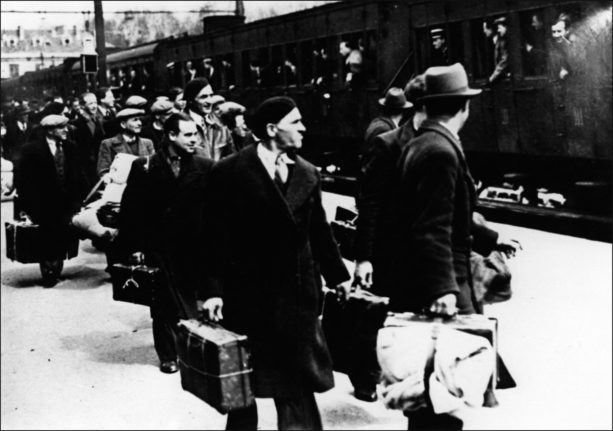 This file photo taken in May, 1941 shows Jewish deportees getting off the train in Pithiviers. Photo: AFP

With him at Pithiviers station, 100 kilometres (60 miles) south of Paris, will be some of the handful of the survivors of those deported on the eight convoys sent to the Nazi camp.

Macron’s speech will express his concern over the enduring threat of anti-semitism, which “still lurks and sometimes in an insidious way”, said an official from his office.

He will denounce “historical revisionism” — in particular over the role of France’s war-time leader Philippe Petain, who collaborated with the Nazi regime, the official added.

Also at ceremony will be historian and renowned Nazi hunter Serge Klarsfeld, as well as a survivor of the camps, Ginette Kolinka.

Macron is expected at the former station of Pithiviers at around 3:00 pm (1300 GMT).

The building, which has not served passengers since the end of the 1960, has been converted into a memorial to the Holocaust which opened earlier this month. This picture shows the Pithiviers station memory centre after its rehabilitation as a new Shoah memorial site during a press visit, ahead of its inauguration on July 17, 2022. (Photo by Geoffroy Van der Hasselt / AFP)

“This station is the place where the French event becomes European genocide,” said Jacques Fredj, the director of the Shoah Memorial, which commemorates the French deportations.

“It is a place of memory unique in France.”

“It’s a priority, in the face of the rise in anti-semitism, racism and conspiracy theories.”

Some of the 13,000 Jews arrested in Paris and its suburbs by French officials on the orders of the Nazi occupiers passed through the station. 4,115 were children.

The incident has become known as the Vel d’Hiv round-ups because the French police took 8,160 of the Jews, including the old and sick, to the Velodrome d’Hiver, a cycle racing track in Paris’s 15th arrondissement.

From there, they were taken to camps at Pithiviers and other locations and onto the Nazi concentration camps. Only a few dozen ever returned.

The comments come just a few months after failed presidential candidate, the far-right journalist and polemicist Eric Zemmour, argued that Petain had in fact saved French Jews during the war years.

The claim is contested by most historians, who point to the wartime leader’s well-documented anti-Semitism.

Macron was himself criticised for saying in 2018 that Petain had been a “great soldier” during World War I, even if he had subsequently made “fatal choices”.

The French president’s speech on Sunday is expected to continue the work of his predecessor Jacques Chirac who in 1995, 50 years after the Vel d’Hiv round-ups, acknowledged France’s responsibility for what had happened.

“France, on that day, committed the irreparable,” said Chirac, in what is now considered a landmark speech.

After Chirac, Francois Hollande went further during his presidency, speaking in a 2012 speech of a crime “committed in France, by France”.

Then in 2017 Macron, newly elected as president, reaffirmed France’s responsibility for the round-up in a speech marking its 75th anniversary and in the presence of then Israeli premier Benjamin Netanyahu. France has had a dangerously hot summer – one that emergency doctor, Patrick Pelloux, estimates will lead to “5,000 to 10,000 excess deaths” by the end of the season.

As a result, several emergency medicine doctors have announced new recommendations to help the French adapt and stay safe in the warmer temperatures.

Interestingly enough, it might involve mimicking the behaviours of France’s neighbours to the south – known for their heat adapted lifestyles (e.g. the afternoon siesta).

French daily Le Parisien, has even published a map comparing temperatures in French cities to those in Spain:

Here’s how these doctors recommend the French become more Spanish:

Alter the daily routine – Spain is famous for its afternoon siestas and late evening meals. In France the classic apéro or ‘happy hour’ usually begins at about 5 or 6pm with dinner at 7pm or 8pm, but during the heatwave many bar owners are reporting that terraces are empty at 5pm, and only fill up from 9pm when the temperatures start to fall.

Pelloux recommended to Le Parisien that the French may need to begin adjusting their working hours to avoid the hottest part of the day, but continue until later in the evening.

Another emergency medicine doctor, Agnès Ricard-Hibon, who works as head of the Samu du Val-d’Oise emergency unit, told the newspaper: “It is logical that we imitate the Spanish rhythm.

“When it’s very hot, you have to get up earlier and take a break in the afternoon, especially if you’re a vulnerable person with a risk of complications due to dehydration.”

It might also be recommended to extend the classic 12-2pm shop and office closure and keep shops closed during the high heat of the early afternoon, and instead take evening strolls at 8pm, rather than earlier.

Pelloux said that as France transitions “from a temperate to a tropical climate, we will have to stop working between noon and 5 pm.”

No more tanning and goodbye suits – With skin cancer on the rise in France, experts worry about the popularity of the tanning trend, particularly during the hottest parts of the day.

Emergency physician Christophe Prudhomme told Le Parisien that it might be necessary to “close beaches at the hottest times” in order to keep people safe from the heat.

He also said we might have to change our fashion habits – dark coloured clothing, such as suits, hold in heat on hot days. Prudhomme recommends embracing fashion trends with more breathable fabric, such as cotton or linen.

In Spain, prime minister Pedro Sanchez is leading the way by announcing that he will no longer wear a tie when the weather is hot.

Lighter lunches – Ricard-Hibo told Le Parisien that as the days go by, we must learn to accept the heat and lighten our lunches.

Other experts recommend eating lots of hydrating foods during heatwaves, so maybe this is your opportunity to test out a particularly tasty gazpacho for your midday meal. The Local Spain has some other delicious recommendations to test out during the hot weather.

READ MORE: The best Spanish food and drink to keep you cool during the summer heat

What about the official governmental advice?

Meanwhile, the French government’s official advice is of course to drink plenty of water, but it is also a bit contradictory to the gazpacho suggestion – in the graphic below, you can see the French government recommending regular meals to keep from feeling faint in the high temperatures.

The government also recommends keeping the shutters closed, avoiding alcohol (maybe go light on the sangria), and staying cool by ‘getting your body wet’ whether that be by jumping in a fountain or standing in a brumisateurs (the machine that pumps out water vapour). 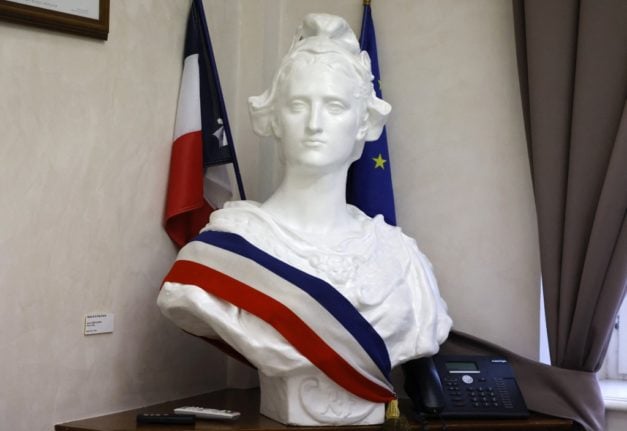