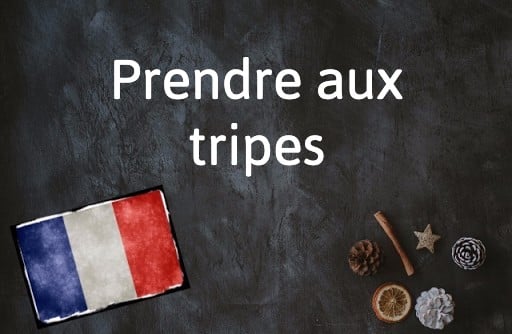 Why do I need to know prendre aux tripes?

Prendre aux tripes – usually pronounced pron-druh oh treeps – translates literally to ‘to take in the stomach lining.’ Tripes is more usually seen on a menu, referring to the offal dish made from the stomach of cows, but also has a more general meaning as ‘the guts’ or ‘the intestines’.

However, this phrase does not literally have to do with anatomy. In actuality prendre aux tripes in French means to be ‘deeply, emotionally moved.’ For instance, if you go to see a particularly sad film you could use this phrase to describe how much it genuinely tugged at your heartstrings and made an impact on you. You might also say it was ‘gut-wrenching.’

Several French phrases use the word ‘tripes,’ which in colloquial French is a way to refer to one’s gut – the foundation for emotions, similar to how we might speak of the ‘gut’ in English (ex. A ‘gut feeling.’)

A version of this phrase came into the limelight recently after French Minister of the Interior, Gérald Darmanin, was quoted saying that his party – the centrist majority – must also ‘parler aux tripes’ to the French public. Darmanin was referring to how both the far-left and right have managed to speak to the emotions and core concerns of French people, and that the majority party must respond in this way as well.

Je suis assistante sociale pour enfants, et l’autre jour, un de mes cas m’a prise aux tripes. Il a eu un impact considérable et j’y ai réfléchi depuis. – I am a child social worker, and the other day one of my cases was so emotionally moving. It was very impactful and I have been thinking about it ever since.