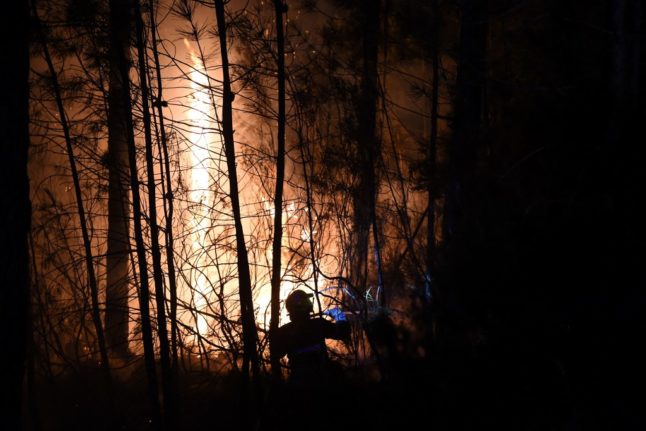 Firefighters work to extinguish a wildfire near Besseges, southern France, in the night between July 7, 2022 and July 8, 2022. (Photo by Sylvain THOMAS / AFP)

“This fire is far from being done. There are fronts in hard-to-reach areas that we haven’t tackled and that are advancing freely,” said Eric Agrinier, a senior member of the fire service.

“It’s going to be a feat of endurance,” he added later, warning the blaze may not be brought under control until Sunday because of unfavourable weather conditions.

“We burn some parts (of the forest) so when the fire spreads it reaches an already-burned zone and slows down, that makes it easier to stop its advance,” said Jacques Pages, standing in front of a line of flames lighting up the
pitch-black forest.

Described by emergency responders as a “mega-fire”, the blaze started near the village of Bordezac and forced evacuations from nearby Besseges and other settlements on Thursday night.

The local prefect’s office said around 100 people had to be put up in holiday homes and restaurants in the area, which is about 90 kilometres (55 miles) north of Montpellier and the Mediterranean coast. 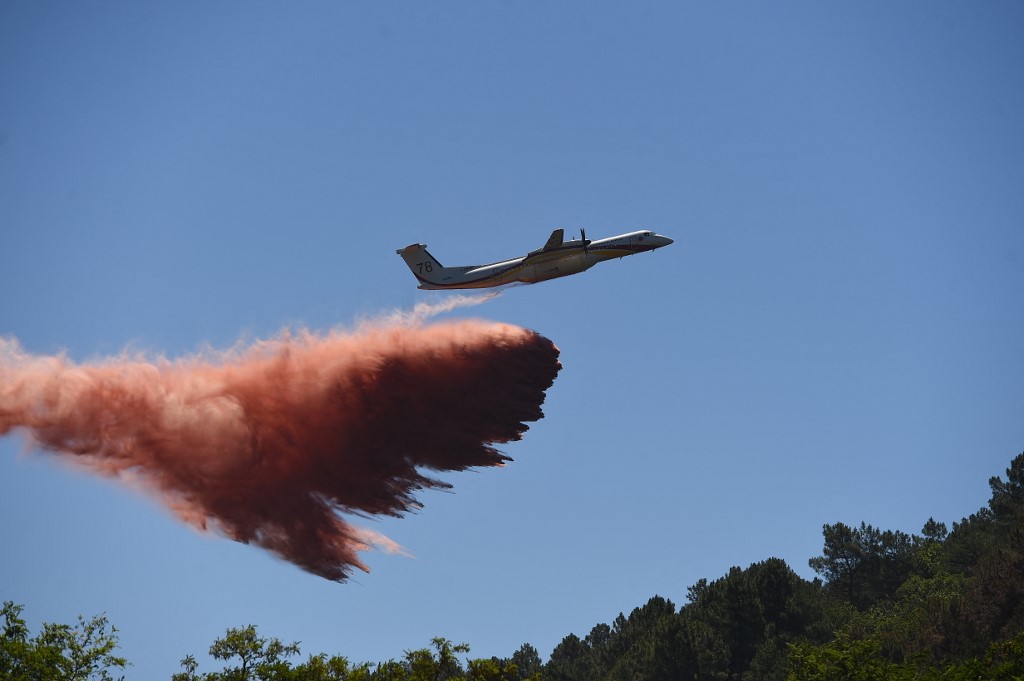 “I’ve been finding rooms for people and all the holiday homes are doing the same,” said Regine Marchand, manager of a restaurant in nearby Aujac, on Thursday night.

“We’ve made them pasta, people left quickly without bringing anything, but they’re keeping their spirits up, there’s a good atmosphere.”

By Friday, people’s homes were no longer in danger, with only a garage and a small hut damaged.

As well as personnel on the ground, two planes have been dumping water since the early morning.

On Thursday, the air deployment had stretched to 12 firefighting planes and two helicopters.

Roads were closed to traffic entering the Besseges area, while hundreds of firefighters remained on the scene, some drawn from neighbouring regions.

Drought raises risk
Like large swathes of the country, southeast France has suffered from drought this year, increasing the risk of fires. 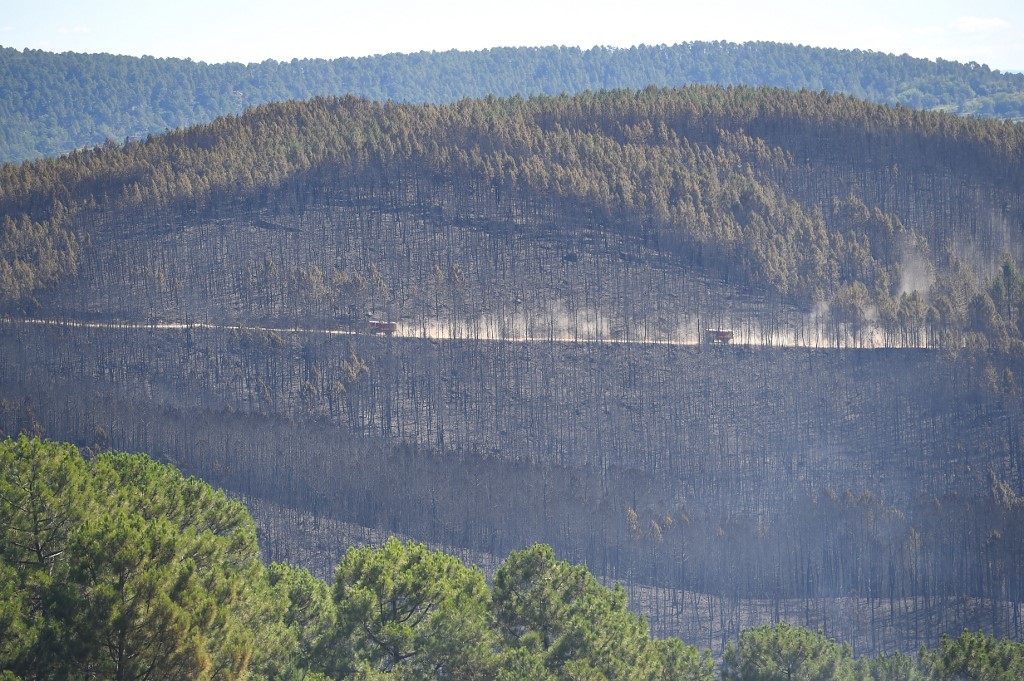 During an unseasonable heatwave last month, around 600 hectares were burned in a fire started by shelling on an army artillery training range near the Mediterranean port city Marseille.

Firefighters in that Bouches-du-Rhone region were called out to 35 outbreaks on Thursday, many of them close to inhabited areas.

Four houses were destroyed near southern city Arles and 250 firefighters were called out to a brushfire in Saint-Mitre-les-Remparts.

Although several other fires began in southern France on Thursday, most were put out before nightfall.

The fire service said thousands of hectares of heavily wooded land were under threat, as winds gusting at up to 80 km/h (50 mph) fanned the flames through the dried-out trees. 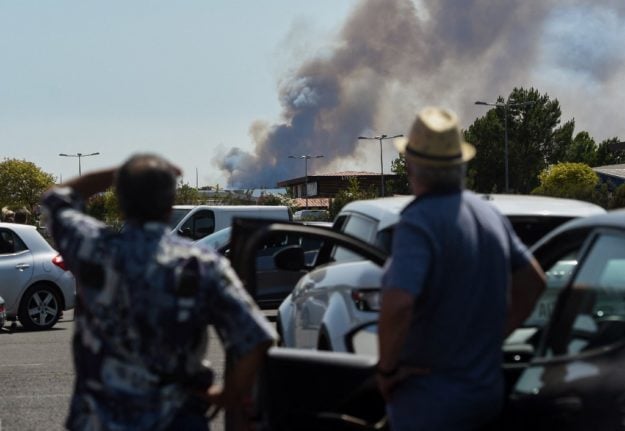 Two wildfires have been burning in the Gironde département in south west France for a week, and a total of 37,000 people have now been evacuated from the area.

One of the fires has reached the coast at Dune du Pilat, Europe’s tallest sand dune, which is also a popular spot for camping. At least five campsites sited close to the dune are “90 percent destroyed” according to the local Préfet Fabienne Buccio.

Meanwhile in Bordeaux, 60km away from the fire, the city is engulfed in a thick “smog” caused by smoke from the fires, while locals have complained of a strong smell of smoke.

Photos of the city show it covered in a haze, while air quality maps for the whole region show dangerous levels of air pollution.

More than 2,000 firefighters are still battling the flames in Gironde, and a sudden change in the wind direction on Monday afternoon saw three further towns evacuated.

A wildfire also broke out in Brittany on Monday, in the département of Finistère – 160 firefighters are on the scene. 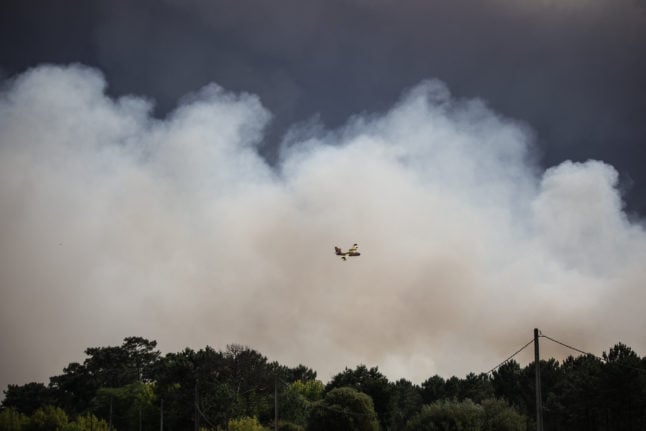 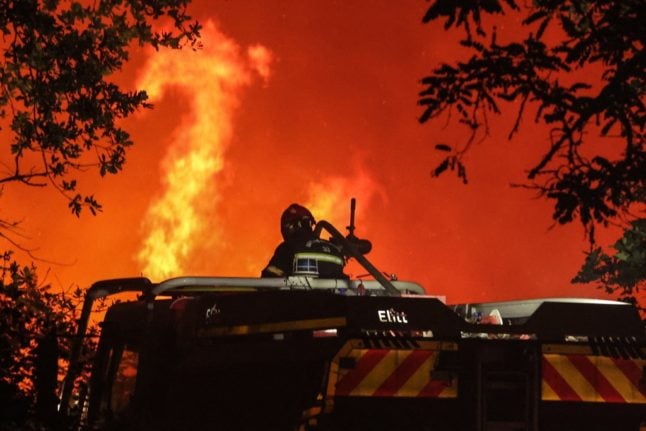