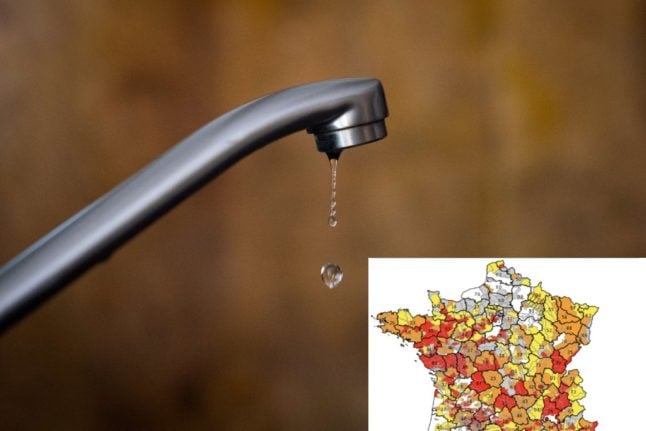 As of Tuesday, August 11th, 93 of France’s mainland départements have some level of drought alert in place, including the Paris region. Of these alerts, 68 are at the highest ‘crise‘ (red) level.

The government’s Propluvia website has a map showing areas where restrictions are in place which is regularly updated as restriction levels change, although local authorities can also impose their own extra restrictions (see below).

READ ALSO: Ask the expert: Why is France’s drought so bad and what will happen next?

However, water restrictions are not put in place on a département level, as the map below shows, so first you need to work out whether your local area is at vigilance, alerte, alerte renforcée or crise level.

The map below shows the restrictions as of August 11th, 2022. 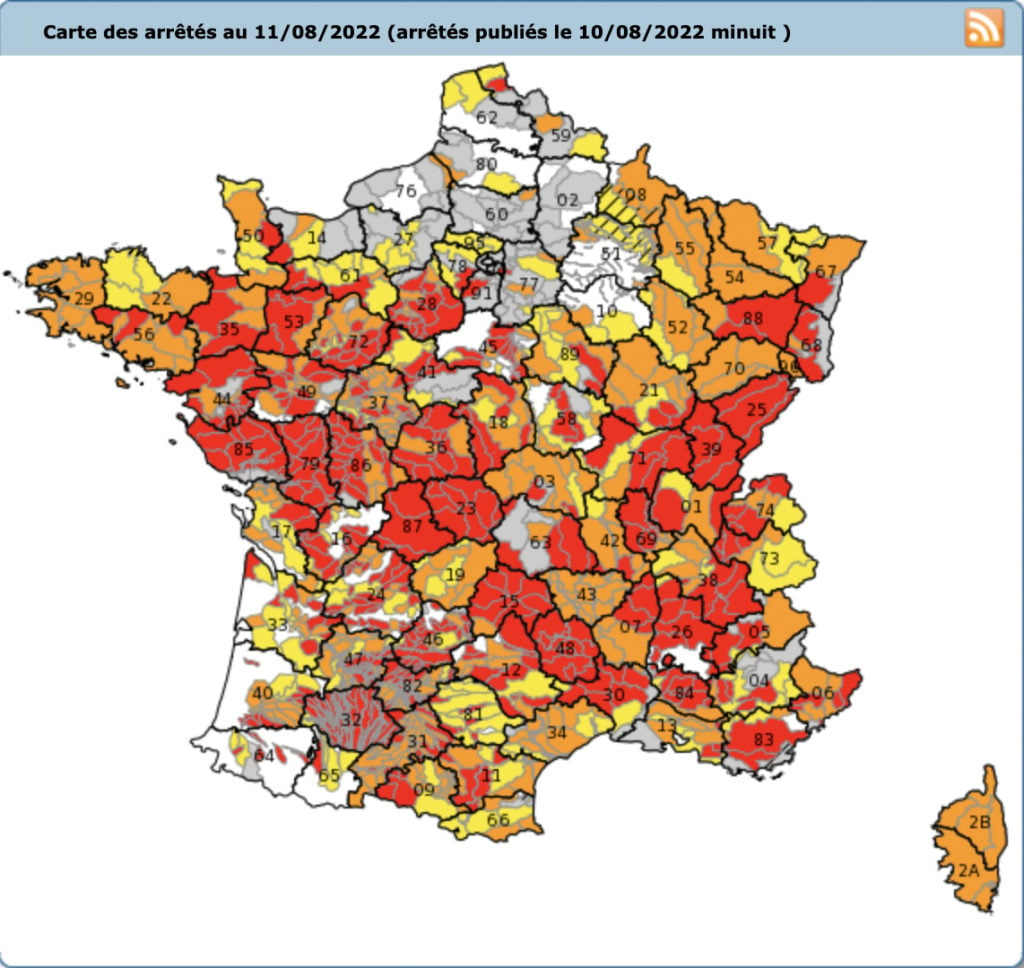 Vigilance (grey on the map): the lowest alert level, involving raising awareness and encouraging individuals to reduce water usage (see below for some tips), but no activities are actually banned.

This level signifies that a more serious water shortage is likely in the coming weeks without significant rain.

Alerte (yellow): a full water supply for all normal daily activities can no longer be assured.

Limits on agricultural and nautical water usage are in place.

For private households, watering of lawns, sports fields, flower beds and vegetable gardens is also prohibited between 11am and 6pm and the filling and emptying of private pools (over 1 cubic meter) is prohibited except for refilling/topping up or a first filling “if the work had begun before the first restrictions”.

Alerte renforcée (orange): a full water supply can no longer be guaranteed.

Farmers must reduce their water consumption by 50 percent and all daytime watering is banned, as are sprinklers. The watering of sports fields and golf courses is strictly limited.

For private households the watering of lawns and flower beds is prohibited. Vegetable gardens may only be watered between 8pm and 9am.

The filling and emptying of private pools (over 1 cubic meter) is prohibited except for refilling/topping up or a first filling “if the work had begun before the first restrictions”.

Public swimming pools may be closed, at the discretion of the local health authority.

Crise (red): A ban on any non-priority use, including agricultural purposes. Water may only be used for essential reasons – health, civil security, drinking and sanitation.

Farmers are forbidden to irrigate their crops with sprinkler systems and sports fields and gold courses can only be watered if they are being used for national or international level competition.

Private households can only use water for essential reasons such as drinking, cooking or washing.

At each alert level, local préfectures and mairies can introduce extra restrictions if it is thought necessary.

In Haute-Corse, the region in the north of Corsica, local authorities have warned that if current water consumption habits continue as they are, then the area will ‘run out of water within 25 days.’ As a result, they have extended some restrictions to include non-tap water as well as tap water.

Meanwhile hundreds of villages have either run out of water altogether, or local authorities have imposed rationing on a commune level because of dangerously low local supplies.

If this is the case in your area, you will be contacted by the mairie to advise you of the new rules. In areas where the tap water supply has failed, it is also the responsibility of the mairie to distribute bottled water to households.

Most restrictions concern only l’eau potable (tap water) but some also include l’eau brute – which is untreated water such as water from a well on your property.

READ MORE: ANALYSIS: Is water likely to be rationed as France’s drought worsens?

France experienced its driest July on record since 1959 – there was just 9.7 millimetres of rain in July, Météo France said.

That was 84 percent down on the average levels seen for July between 1991 and 2022, and made it the second driest month since March 1961, the agency added.

As early as May 13th, the government was advising residents to cut water use as much as possible by making sure taps were turned off when not in use, and limiting the amount of water they used on their garden

Even in areas on a low level of alert, the Environment Ministry is asking everyone to make an effort to save water and has released the following tips:

The above are all suggestions, rather than rules so you don’t need to worry about the mayor coming round to check whether you’re having a shower or a bath.