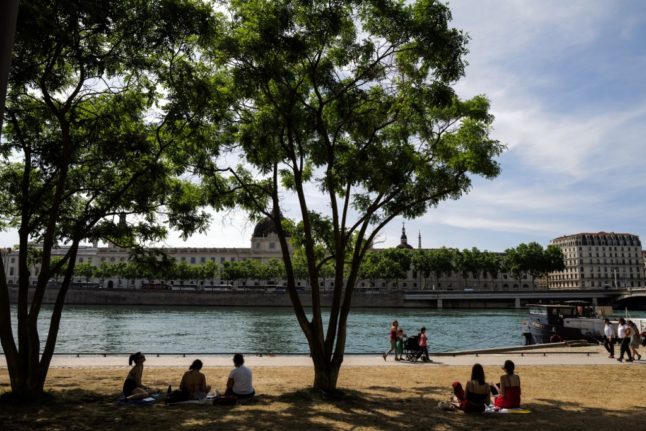 People stand on dried lawns as temperatures this week could exceed seasonal norms by ten degrees celsius in Lyon on May 18, 2022. (Photo by OLIVIER CHASSIGNOLE / AFP)

“The government is going to encourage the development of cool spaces in urban areas with strong support for local authorities as they adapt to the consequences of climate change,” government spokeswoman Olivia Gregoire told reporters.

A total of €500 million would be set aside for the initiative, she said.

She also called for “vigilance” as temperatures began to climb in the south and southwest of the country, which is expected to bear the full brunt of a heatwave later this week.

Peak temperatures of more than 40C are forecast between Thursday and Saturday, national weather forecaster Méteo France has said, with the whole of the country set to experience a hotter-than-usual spell.

“Faced with this significant, strong and early heatwave, the government calls for vigilance,” Gregoire added, saying the elderly, people living on their own and the homeless were particularly at risk.

School children and teachers are also complaining about the impact of the hot weather which is coinciding with end-of-year exams for many students.

A primary school teacher in Marseille told AFP she had measured 30C in her class on Monday.

“We’re facing fully south and we couldn’t even open the windows to get some air in,” she said.

Water use restrictions are already in place in around a third of France — and utility companies are urging farmers, factories and public service providers to show “restraint” in their water use.

The spring has been exceptionally warm and dry so far, with May 2022 the warmest May since records began.

Under a 2015 law passed by parliament, all rooftops on new buildings built in commercial zones in France must either be partially covered in plants or solar panels.