A storm over a field in Sublaines, central France. Photo: Guillame Souvant/AFP

A woman died after being trapped under a car by flash waters caused by a storm in the northern city of Rouen, the mayor’s office announced.

In the Landes and Gers region of southwest France, hailstones bigger than golf balls crashed down on parts of the Armagnac vineyard, local growers and officials said.

Bernard Malabirade, president of the Gers agriculture department, said the hailstorm had affected tens of thousands of hectares. In the southwest Landes region, wine grower Nelly Lacave described the destruction left in the wake of the storm.

“In the vineyards, there is nothing left, the roof of our agricultural building is a giant Swiss cheese, and in the house, the windows are broken,” she told AFP. “My father, who is almost 70 years old, has never seen this,” she added.

Power company Enedis said Saturday evening the storms had cut off electricity to around 5,000 household across the country.

In Loir-et-Cher, central France, 30,000 scouts who gathered for a camping trip over the Pentecost holiday weekend had to be rushed to safety, many of them inside the local chateau.

“The storm broke at around 4:30 pm,” the scouts’ press spokesman Damien Tardy told AFP. “It lasted for a few minutes, but it was relatively strong, and a gust of wind collapsed the tents of the cub scouts.

“Ten thousand youngsters, aged between eight and 12, were given shelter inside the chateau with the cooperation of the prefecture,” he added.

Some of the older scouts however had stayed out camping. “They were singing when I went over to see them.”

Cap Corse on the north of the island of Corsica, registered 37.4 degrees Celsius (99.3 Fahrenheit), said meteorologists France-Meteo, a record for the month of June.

France-Meteo has warned more storms were on the way, starting in the southwest and moving north and east across the country. 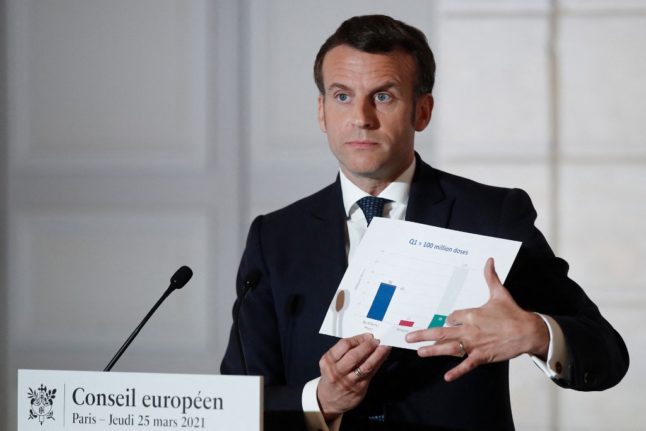 French President Emmanuel Macron shows a graph of the Covid-19 vaccine doses, during a press conference after a European Union (EU) summit held over video conference, at The Elysee Presidential Palace in Paris, on March 25, 2021. Photo: BENOIT TESSIER / POOL / AFP

France’s inoculation drive has been criticised as slow, with 11.45 percent of French people having received one or more jabs, compared with 43.79 percent of Britons.

“In a few weeks we will have completely caught up with the British, who will meanwhile be increasingly dependent on us to vaccinate their population,” he said.

His remark appeared to refer to stocks of the Anglo-Swedish vaccine AstraZeneca that are produced in EU member states.

The EU has threatened to ban pharma firms from exporting coronavirus vaccines to Britain and other well-supplied countries until they make good on their promised deliveries to the bloc – a threat directed mainly at British-based AstraZeneca.

French Foreign Minister Jean-Yves Le Drian on Friday suggested Britain, which has prioritised getting first vaccine doses to as many people as possible, would struggle to obtain the second doses they needed for full protection.

“The United Kingdom has taken great pride in vaccinating well with the first dose except they have a problem with the second dose,” he told France Info radio.

The row with Britain comes as doctors at Paris hospitals swamped by Covid-19 cases warned they would soon have to start choosing which lives to save.

The spiralling caseload comes a week after a third of the French population were placed under a loose form of lockdown.

In an open letter in the JDD, 41 medics complained that the measures taken by the government to try to tame the third wave were “insufficient” and said they would be at full capacity within two weeks.

“We will be forced to sort patients to try and save as many lives as possible,” they warned, adding they had  “never experienced a situation like this, not even during the worst (terror) attacks of the past few years.”

Meanwhile, growing numbers of schools are temporarily closing classrooms over infections among staff and pupils.

Unlike many of its European neighbours France has kept schools open since last summer.

Pressed on whether he was planning to tighten restrictions, Macron told the weekly: “Nothing has been decided”.

PARTNER CONTENT
Moving to France – how to zap the culture shock
Url copied to clipboard!