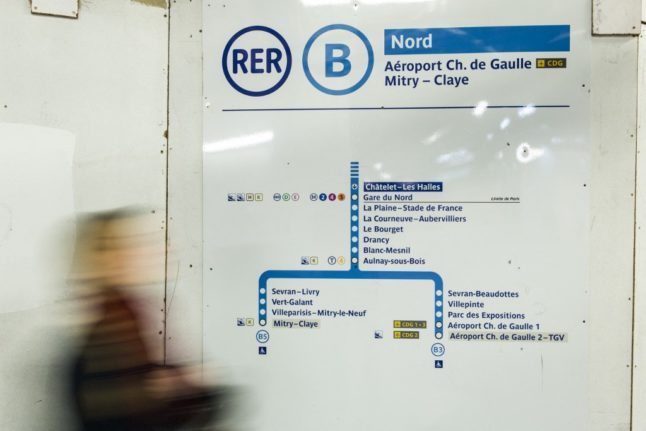 This photo taken late on March 8, 2016 shows a commuter walking by a map of the RER B line at the Chatelet-Les Halles station in Paris. - (Photo by Geoffroy Van der Hasselt / AFP)

French transport unions representing workers on the Paris public transport have called for a strike on Saturday with the aim of disrupting travel to and from the Stade de France.

Separately planned refurbishment works could also disrupt the travel options for fans arriving into Charles de Gaulle airport on THursday and late Friday as well as those heading back to the airport on Sunday.

Unions representing workers on the RER B train line which links central Paris to the Stade de France stadium, the venue for the final, have called a strike for Saturday to protest against a falling staffing numbers and working conditions.

Their aim is to take advantage of the the fact thousands of football fans will use the line on Saturday to try and cause maximum disruption.

Early on Friday afternoon, RATP and the SNCF have announced traffic forecasts for this Saturday on the RER B.

Two out of three trains will run on average during the day and 4 out of 5 trains from 5pm until the end of service. 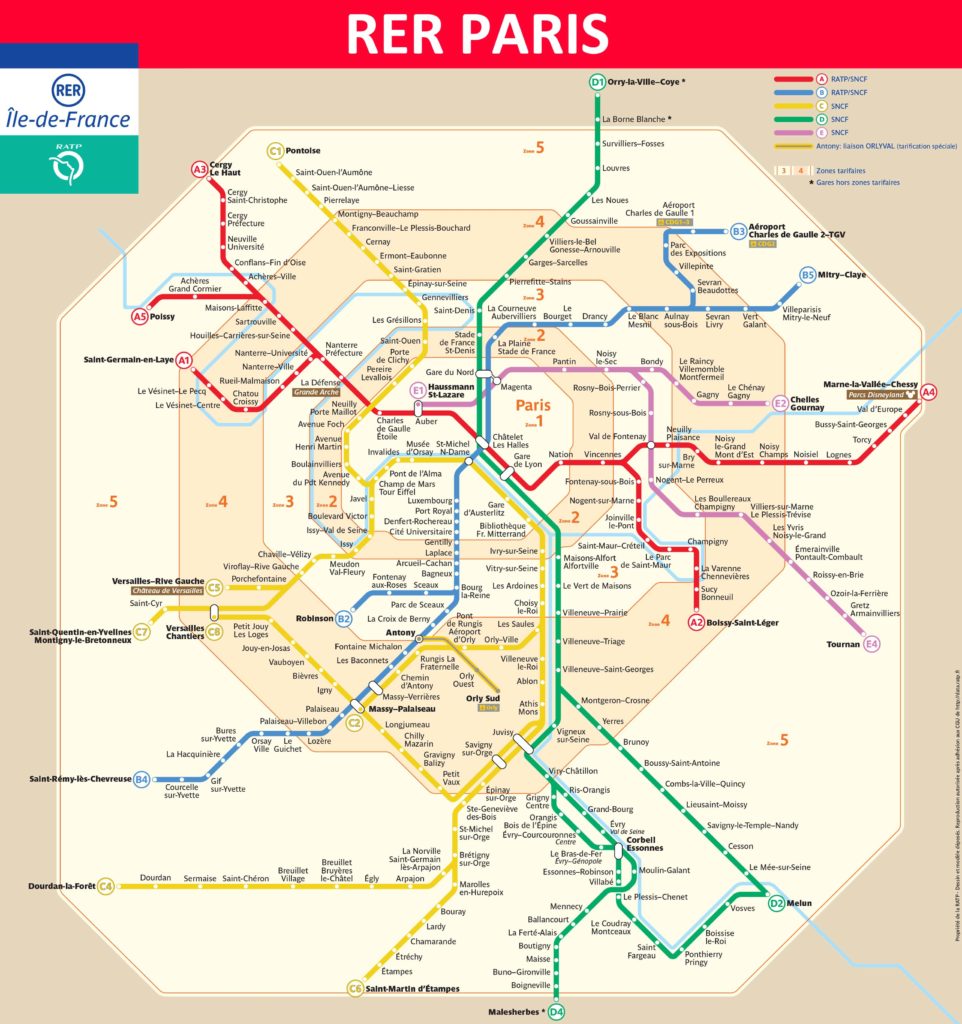 Be aware, however, the Gare du Nord interconnection is suspended. This means that you will have to change trains, and probably go to the surface station, several floors above, to continue your journey north or south.

Fans shouldn’t panic though. There are alternatives to get to the Stade de France. You can also get there via Metro Line 13 or RER D direct from Gare du Nord and Gare de Lyon (not far from the fanzone). Metro Line 12 which runs to Aubervilliers is also an option, although be prepared to walk from the Metro station (Front Populaire).

It would be wise to give yourself plenty of time given security checks will also be strict and numerous.

The RER A, which runs through the centre of the city from west to east line could also be affected by the strike, but officials have said it will run an “almost normal” schedule.

RER A stops at Nation where the fanzone for Liverpool fans will be set up at the Cour des Vincennes. Fans can get to Nation by Metro lines 1,2,6 and 9 so the strike shouldn’t cause much of a problem here.

There are also planned transport works which could affect many fans, once again on the RER B that links central Paris and Charles de Gaulle airport.

Services between the airport and Gare du Nord won’t run in either direction on Thursday May 26th or Sunday May 29th and will be replaced by a bus service.

That means anyone arriving into Paris on Thursday and leaving on Sunday via Charles de Gaulle airport will face a headache if they were hoping to take the RER B.

🚧 Works on #RERB train line | Traffic will be interrupted on Thursday 26th May and on Sunday 29th May in both directions between Gare du Nord and Paris-#CDG airport.
🚘 Road access may be disrupted: plan ahead for your arrival at the airport.
Advises ➡️https://t.co/NzbKK8CoH7 pic.twitter.com/a6YinDq6PG

So anyone arriving into Charles de Gaulle airport on Thursday can take a replacement bus service that will drop them at the RER D stop in Stade de France / Saint Denis. From there they can can take the RER D to central Paris.

For those heading to the airport on Sunday you can take the RER D to Stade de France / Saint- Denis then pick up a bus replacement service to the airport.

There are of course taxis that can take you to the airport as well for which there are fixed prices for the official taxi firms (not Uber). 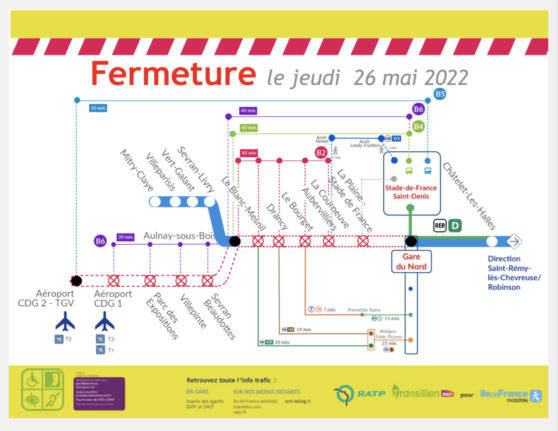 Finally anyone arriving into Paris Charles de Gaulle airport late on Friday night will also face similar disruption with trains to Gare du Nord stopping at 22:45. A bus replacement service will be put in place.