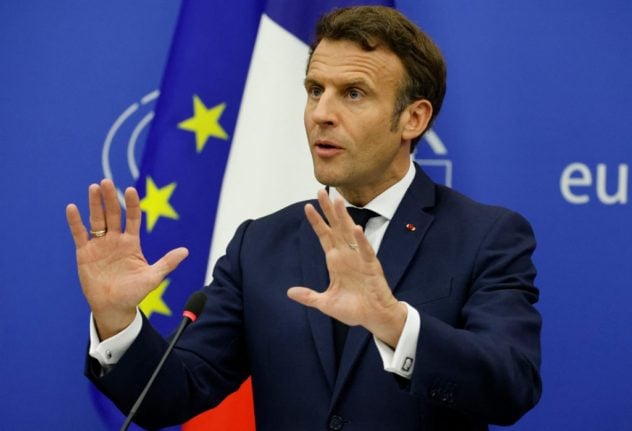 Emmanuel Macron speaks at the Conference on the Future of Europe. (Photo by Ludovic MARIN / various sources / AFP)

For the ever-increasing list of aspiring member states, and even post-Brexit Britain, a wider European club could offer an alternative for coordination on political and security issues as they await membership that can often take years.

But the proposal by Macron — floated at a keynote speech at the EU Parliament on Monday — has already stirred controversy not least over the prospect it could be offered to Ukraine in place of full membership.

“The idea could be a positive compromise, provided that it is given substance and content,” said Christine Verger, vice-president of the European think-tank Jacques Delors Institute.

But questions remain over central issues such as whether the mutual assistance clause in the EU treaty would apply to members of this hypothetical new community, Verger added.

Ukraine, which is battling Russia’s invasion, is seeking rapid EU membership, but Macron on Monday rejected a swift application process, suggesting a broader, different club would be more efficient and that it could take Kyiv decades to join the EU.

But Ukraine warned that a new bloc could not be a substitute for EU membership, as it awaits the European Commission’s decision on whether to grant the country candidate status expected in June.

“If we don’t get the candidate status, it means only one thing, that Europe is trying to trick us. And we are not going to swallow it,” Ukraine’s Foreign Minister Dmytro Kuleba told the Financial Times.

Lithuanian President Gitanas Nauseda added that Macron’s idea was “an attempt to cover up the obvious lack of political will to take decisive decisions on granting candidate status” for Ukraine.

However Macron told the parliament in Strasbourg that the EU, “given its level of integration and ambition”, could not be Europe’s only organising body.

France’s president, fresh from his re-election victory over the far-right last month, cited security, energy, transport and movement across borders as issues the body could tackle.

A new European bloc would also untangle in part the thorny issue of EU enlargement, with Paris fearing that an ever-growing EU would slow down already bogged down European institutions.

France, but also Denmark and the Netherlands, are sceptical that by accelerating Ukraine’s application, Kyiv would not have time to complete essential political reforms.

When former French president Francois Mitterrand first proposed a European confederation of nations in 1989 as the Berlin Wall fell, the idea sparked interest but never got off the ground.

“The suggestion had two problems: it included Russia — whereas the idea here is to create an alternative camp to Moscow — and it arrived too quickly, as Germany had not yet reunited,” said former Italian prime minister Enrico Letta.

And for countries with their sights set on NATO and EU, the proposition was insufficiently concrete or formal, said Verger.

Decades later, states that have been knocking at the EU’s door for years may see the announcement as progress.

“But what do we mean by political cooperation? And how will we make it work?” said Camino Mortera of the think-tank Centre for European Reform.

Albania, Montenegro, North Macedonia, Serbia and Turkey are officially candidates to join the EU, while Bosnia-Herzegovina and Kosovo are potential candidates.

“Today, we must firmly anchor Ukraine in Europe, just like Moldova or the countries of the Western Balkans,” said Belgian Prime Minister Alexander de Croo on Monday.

These countries must be allowed to “get closer to the Union … to show their citizens that they are part of Europe as much as we are,” de Croo added.

Belonging to a broader European political community would not prejudge of any future EU membership, Macron said.

Britain, which left the EU in 2020, could join the club too, Macron said, adding that potential members would need to be on the European continent and share European values.

Letta said he believes such a group, made up of the 27 EU Member States and EU hopefuls, could be set up very quickly.

“A first meeting could be held as early as the autumn in Brussels, before the elaboration of a ‘simplified’ treaty,” Letta said.