Looking for a fun activity this month that will also let you practice a little French? Or perhaps you might be interested in honing your French film viewing skills ahead of the upcoming Cannes Film Festival. Well, mark your calendars for this month’s list of film screenings.

Lost in Frenchlation is a cinema club that offers English speakers who may not be fluent in French the chance to enjoy French films, by screening new releases and classics with English subtitles to help viewers follow the story.

It has four projections planned for the month of May.

This is the agenda:

La revanche des crevettes pailletées is an LGBT comedy directed directed by Cédric Le Gallo and Maxime Govare. It will be the sequel to the 2019 film Les crevettes pailletées (The Shiny Shrimps). The first film followed the story of homophobic coach forced to coach a gay water polo team. Together, they travel to Croatia for the ‘Gay Games,’ the largest LGBT sporting event in the world.

This next instalment will follow the team as they try to make their way to a competition in Tokyo, only to be derailed by a missing their connecting flight, forcing the team to pass through a very homophobic region in Russia.

Critics gave the first film moderate, though generally positive, reviews, sometimes decrying its tendency to play into stereotypes. This time, however, the film will step into darker themes, addressing the complexities of life outside of France for members of the LGBT community.

The film will be screened at 8pm at Luminor near Hôtel de Ville. Drinks and snacks will begin at 7pm.

Full price tickets are €10 although students can pay a reduced fare of €8. You can buy your tickets here.

Goliath is a political thriller telling the captivating story of a principled environmental lawyer, an international chemical corporation lobbyist, and a school teacher-turned activist whose paths cross during a terrible investigation into pesticide use.

Called a “captivating and edifying thriller” by French weekly Le Journal du Dimanche, the film was inspired by the “Monsanto Papers” and co-written and directed by acclaimed director Frédéric Tellier.

The film will be screened at 8pm in the 14th arrondissement at L’Entrepôt, with the drinks available at 7pm. Tickets are €8.50 full price and €7 for students and all other concessions. You can buy your tickets here.

Les Passagers de la nuit is set in Paris during the 1980s, and tells the story of a mother attempting to care for her two teenagers after being left by her husband. She finds a job in a night radio show, where she meets the free-spirited Talulah, and together the family begins a new journey toward healing.

All are invited to meet at the Luminor for drinks at 7 pm prior to the screening, which will kick off at 8 pm. After the screening there will be a Q&A with director Mikhaël Hers, translated by Emile Bertherat.

The film will be screened in the 4th arrondissement, at Luminor (20 Rue du Temple), and tickets will be €10 full price and €8 for students and all other concessions. You can purchase your tickets here.

Petite leçon d’amour (Little Lesson of Love) is a romantic comedy. The film follows the story of protagonist, Julie, who walks dogs in her spare time. One day she comes across a disturbing love letter written by a high school girl to her teacher. Frazzled by the intensity of the letter, Julie embarks on a mission to find the teacher and prevent the worst.

This film will also offer a Q&A after the screening, with director Ève Deboise, known for helping to create the TV series Une famille formidable.

The film will be screened at the L’Arlequin theatre, full details to come. 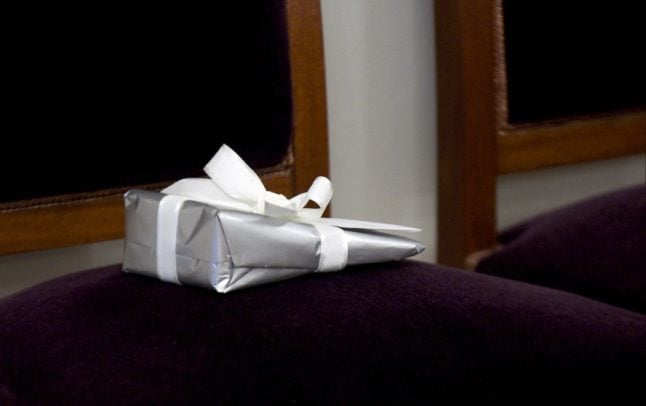 Question: I am British but have been living in France for quite some time. My go-to gift in most social situations is a bottle of wine but it seems that a lot of French people don’t do that and some look a little puzzled when I offer one. What would you suggest I should offer instead?

The kind of gift you could choose to give someone in France really depends on the context and of course there are no hard-and-fast rules. There are, however, some guidelines on gift-giving.

It is considered rude to arrive avec les mains vides or empty-handed at someone’s house if you have been invited. But at the same time, bringing wine is not common.

Gifting a bottle of wine in France can give the impression that you don’t trust the host’s selection – especially if you are going to a dinner party.

There’s an age divide here – if you’re going to a student party then bringing your own booze is definitely the norm and younger French people in general do sometimes bring wine to parties. However this is not the tradition among older generations, especially among the more well-off.

Flowers or plants are a strong gift option in France. This partly explains why French florists generally remain open on a Sunday even when many other businesses are closed.

There are a couple of things to be aware of though. Some French people believe that bouquets should always contain an off number of flowers – for good luck.

Certain types of flowers carry special symbolism: white flowers are often given at weddings (except for chrysanthemums and lilies which are generally used at funerals) and red roses are obviously seen as a romantic gift.

A plant in a pot is a popular housewarming gift, while the red-leafed poinsettia is often given as a gift at Christmas.

If you want to think a little outside the box and go for an alternative, you could always get a cactus – they are not particularly French but are durable and can survive without a lot of sunlight or attention.

Chocolate was thought to have first arrived in France in the 17th Century, when it was presented as a gift to King Louis XIII.

Since then, it has remained a safe bet as far as gift giving is concerned.

Even if France is not as well known as neighbours like Belgium and Switzerland when it comes to the manufacturing of high-quality chocolate, most French cities have a range of decent chocolatiers to choose from.

It is probably best going for something in the mid to high range, even if the French really love Nutella.

The other thing that generally opens on a Sunday, even in small towns, is the pâtisserie.

If you have been invited for lunch at the home of someone you know well, you could offer in advance to pick up a dessert at the pâtisserie, usually one of the delicious large family-sized tarts or cakes that you will see in the window.

If you know the person less well, or if they already have dessert in hand, you could pop into the pâtisserie anyway and pick up a box of macarons. Almost all pâtisseries sell these, often in a gift box, and it’s a classic gift to bring to someone’s home (unless the person you are visiting is diabetic or has a nut allergy).

As previously mentioned, wine is generally a no-no. But there are a couple of exceptions – a sweet dessert wine can go down a treat. Bringing a bottle of Monbazillac or Sauternes will not be viewed as a slight on the host’s wine-food pairing.

Alternatively, a bottle of something bubbly (Crémant or Champagne) or a high-quality liqueur that can be served as an apéritif or digestif are seen as appropriate gifts – for adults.

These are the classics, but there are loads of other options too, which very much depend on who you plan to give your gift to.

As in any country, it’s a question of knowing the interests of the recipient and getting them something that you think they will like. If you have a close relationship with someone, you could even consider getting them a novelty present – like these French election socks.

As a big present – for a birthday of a close friend or family member – you could always consider offering an experience rather than a physical gift. Companies like Wonderbox are incredibly popular in France and can be used to organise a massage, getaway, cultural experience or sporting activity for the recipient.

Special presents for close friends are always good but if you’re in a situation such as a family Christmas where you’re buying gifts for lots of people, there is no need to spend a fortune. French Christmas gifts tend to focus on children, with adults swapping smaller tokens of affection.

What else do I need to know about gifting in France?

For a nation of writers and poets, it can be surprising to realise that the French generally don’t send cards to each other – whether for birthdays, religious holidays or anything else. If you receive a gift though, it is considered polite to write a thank you note.

The French are pretty elegant when it comes to gift giving so it is worth wrapping any present nicely (or ask the shop to do it for you, most shops that sell popular gift-items will ask when you pay whether it’s a gift, and if so wrap it up nicely for you with some ribbon).

Finally, if you are lucky enough to receive a gift in France it is considered rude not to open it straight away or to take it home and open it later. So get ripping!

CULTURE
How to make the most of France’s ‘night of museums’ this weekend
Url copied to clipboard!