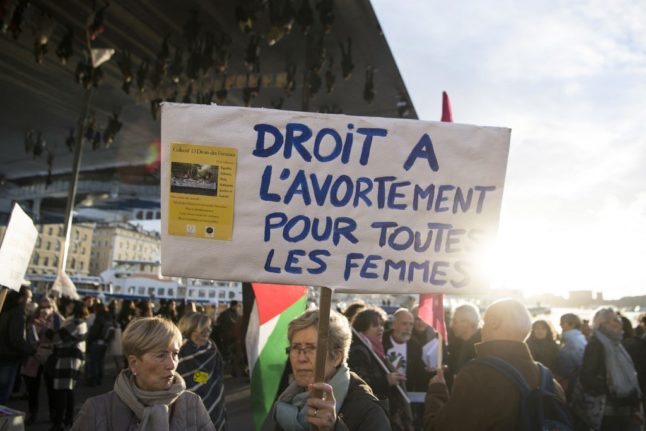 A woman holds a placard reading "Right to abortion for all women" during a demonstration to defend women's rights on International Women's Day in Marseille. Photo by BERTRAND LANGLOIS / AFP

France was relatively late to legalise abortion – terminating pregnancy was legalised in 1975, driven by the politician and holocaust survivor Simone Veil – still a revered figured for many French feminists.

Before 1975 abortion had been illegal and vigorously prosecuted – the Vichy government that ruled France during World War II made it a capital offence and the last person to be executed under this law was Marie-Louise Giraud, who was guillotined in 1943.

Since then, the law has been progressively relaxed, with the most recent change occurring in February 2022.

Abortion is available on demand in France, meaning there is no requirement to prove a risk to either the physical or mental health of mother or child in order to secure a termination.

Until February 2022, the limit for on-demand abortion was 12 weeks, but this was extended to 14 weeks in one of the last bills passed under president Emmanuel Macron’s first term as president.

The 12-week limit made France one of the stricter countries in Europe, and around 3,000 women every year travelled abroad – often to the Netherlands, Spain or England, Scotland or Wales – to have an abortion because they had exceeded the legal time limit.

France now moves in line with Spain and Austria where abortion is legal up to 14 weeks of pregnancy. In the UK, the limit is 24 weeks.

Abortion in France after 14 weeks is possible only in exceptional circumstances such as a risk of severe harm to the mother or a severe and incurable illness of the child.

In a medical context, abortion is known as Interruption volontaire de grossesse (voluntary interruption of pregnancy) and is frequently shortened to IVG.

Two appointments are required in order to secure an abortion and these can be with either a doctor (either your registered GP/family doctor or another), a midwife or at a family-planning clinic.

At the first appointment you will be given information on your options and the methods of abortion available and offered counselling if you want it.

At the second appointment you confirm your request for an abortion in writing, and receive at attestation de consultation médicale.

You can have either a medical abortion – taking medication to bring on a miscarriage – or surgical termination, and the method used depends on your choice and the stage of your pregnancy.

Under 18s have the right to an abortion and do not require parental consent, but in their case counselling is mandatory.

Abortions are refunded 100 percent through the French state health service so if you have a carte vitale you will have nothing to pay.

You can find full details on the process and payment here.

Doctors are permitted to refuse to perform abortion on moral grounds, but in France you are free to see any doctor you choose – you are not limited to only your registered doctor.

The issue of abortion is not an uncontroversial one in France and the most recent law, bringing the legal limit for termination to 14 weeks, was passed in the Assemblée nationale, but with opposition from several political groups.

His boss Emmanuel Macron had been slightly more equivocal on the subject – when France took over the presidency of the EU Macron announced that he intended to push to have the right to abortion added to the EU’s Charter of Fundamental Rights. He later said: “It’s a right, but it’s always a tragedy for a woman”.

However, he strongly condemned the decision in the USA to overturn Roe v Wade and allow states to outlaw abortion provision.

On the right, opposition is stronger. Valérie Pécresse, the centre-right party’s 2022 presidential candidate, spoke out against the extension to 14 weeks, calling it “a headlong rush that distracts from the real problem: access to abortion centres, the lack of gynaecologists and midwives”.

MPs from the far-right Rassemblement National attempted to table a bill to block the changes.

Party leader Marine Le Pen – who received almost 30 percent of the vote in the April presidential election – has long tried to obfuscate her position on abortion as she sought to modernise and soften RN’s image, while holding on to its Catholic conservative fundamentalist base. But she has, in the past, criticised what she termed “comfort abortions”.

In her 2006 autobiography  À contre flots, she laid down her thinking on abortion, claiming some women use it as ‘a form of contraception, and calling for, “incentive measures, coupled with a real policy of information and prevention with adolescent girls” in order to better “fight against abortion”.

HEALTH
What you should know before having surgery in France
Url copied to clipboard!