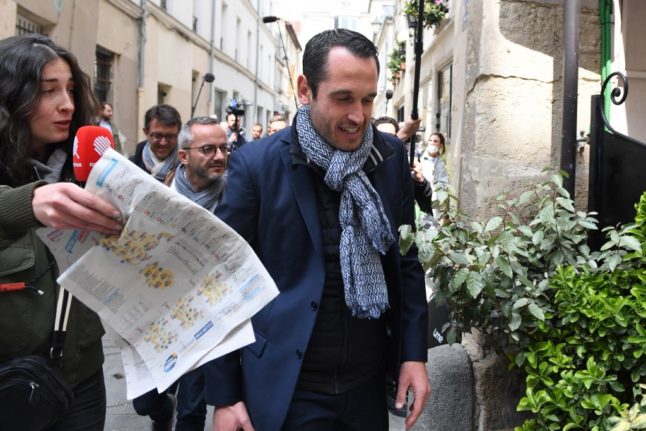 French Socialist Party (PS) spokesperson Pierre Jouvet talks to the press as he arrives to the headquarters of the leftist movement La France Insoumise (LFI) party as part of the ongoing meetings with parties representatives on the upcoming parliamenty election. Photo by Alain JOCARD / AFP

If you have been following French media in recent days you will have seen a lot of mentions of an ‘accord législatives‘ or agreement ahead of the parliamentary (législatives) elections.

The broad aim is this – that all the parties on the left of the political spectrum will come to an agreement not to put up candidates against each other when the parliamentary elections come round in June. If all goes according to plan, this will create a majority of MPs in the Assemblée nationale who are part of a united leftist block, and the left will once again be the major player in French politics.

Even if they don’t quite achieve a majority in parliament, there will still be a sizeable block of leftist MPs rather than – as happened in the presidential election – the left running six different candidates and splitting the vote.

La France Insoumise is led by Jean-Luc Mélenchon, who scored 22 percent in the recent presidential elections, coming in a fairly close third. As the leader of the largest group Mélenchon is pushing to have himself named prime minister if the group manage to form a large enough block at the parliamentary elections.

The Greens scored 4.63 percent in the presidential elections, but have enjoyed a ‘surge’ in recent local elections and now have control of several of France’s biggest cities including Lille, Toulouse and Grenoble.

The French Communist party fielded a candidate in the presidential elections for the first time in 15 years and scored 2.28 percent of the vote. The party currently has 11 MPs in parliament and although it’s a far cry from its peak in the 1950s, it still has around 600 local mayors.

The centre-left Parti Socialiste is the one of the two traditional parties in France (it’s the party of François Mitterand and François Hollande) but suffered an embarrassing wipeout in the presidential elections when its candidate Anne Hidalgo scored just 1.75 percent of the vote. However, the party does tend to do better in local elections and holds onto some important posts such as mayor of Paris.

The other two leftist candidates in the presidential elections – Philippe Poutou and Nathalie Arthaud, both Trotskyists – are not involved in the negotiations.

How are the talks going?

As of Wednesday afternoon, all four parties have reportedly reached an agreement, although Parti Socialiste still has to approve the alliance through its national council.

Several high-profile members of PS are reported to be deeply unhappy with the alliance, meanwhile one Communist candidate and one PS candidate has already said they will refuse to stand aside for the alliance at the elections.

Why is all this important?

You can be forgiven for asking why we’re even talking about this (and you will certainly be wondering that if you’ve seen the dozens of articles that the French press have devoted to the topic) – but all this could end up being important.

Over the next five years of his presidency, Macron will obviously be wanting to pass legislation (some of it – like the raised pension age – pretty controversial legislation) and to do this he needs to get his bills passed through the Assemblée nationale.

At present this is no problem for him, as his party La République en Marche (LREM) has a hefty majority in the parliament and an agreement with the centrist Mo-Dem group.

However, in June the French go back to the polls to elect a new parliament and there is no guarantee that the LREM MPs will keep their seats. The party was a new creation ahead of Macron’s first presidential term in 2017 and has not done well in subsequent local and European elections LREM – for many people the party remains just a vehicle for Macron.

If the leftists achieve their aim, they will create the biggest group in parliament and will be able to block any legislation that Macron attempts to pass – this will leave him in the position of either being unable to pass any laws for the next five years or being forced into a cohabitation with the left.

Cohabitations occur in France when the president and the dominant group in parliament belong to different parties, in this circumstance the president is forced to name  a representative of the dominant parliamentary group as his prime minister and govern in coalition with them – the PM provides the parliamentary support in exchange for changes to the president’s policies. If this happens this time around, Mélenchon is pushing to be named as PM.

However, this depends on two things – first the left needs to conclude its four-way alliance and keep it intact until June 19th.

And secondly the voters will need to vote for the leftist candidates, even in the knowledge that it will be likely to lead to a paralysis of the political system for months at a time, all at a time of national and international crisis.

As ever with French politics, the only thing certain is uncertainty.