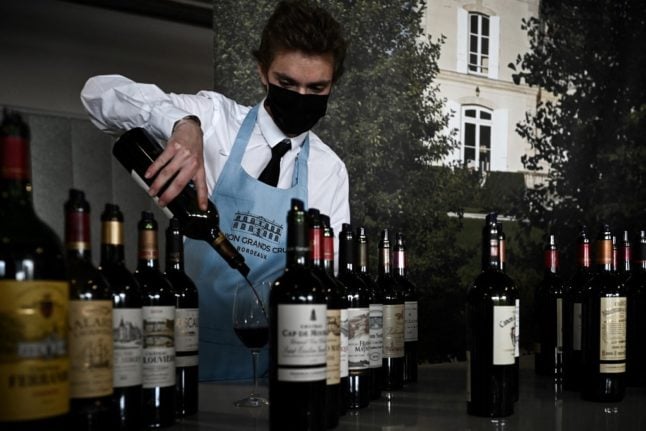 A man serves a glass of wine during the official 'Semaine des Primeurs,' in Bordeaux, France. (Photo by Philippe LOPEZ / AFP)

From the so-called ‘French paradox’ to the changing face of society – French drinking habits have undergone a radical shift over the past 70 years, with just one in 10 French people now drinking alcohol every day.

So what has caused this change?

Wine is a relatively recent addition to France – in that it only began under the Roman occupation. Prior to that, people in what is now France drank beer.

According to wine expert and co-founder of the Académie des Vins et Spiritueux, Sylvain Removille, wine was essentially the currency of the day. “The Romans brought the Gauls wine, and it became one of the biggest reasons for pax romana in Gaul,” said Romeville.

In the following centuries, France’s economy remained largely agricultural. Most of the laws related to wine prior to World War II were focused on ensuring its quality, rather than legislating its consumption.

In the 1950s, the government began efforts to reduce alcohol consumption. Then-prime minister Pierre Mendès France organised the first public, government-led campaign to discourage heavy drinking, with the simple goal of encouraging people to limit alcohol consumption to “less than a litre per meal.”

In the early 1950s, when French wine consumption was 140+ liter/capita, France launched the campaign "Santé Sobriété" to limit alcohol consumption. From 1954 on, graphic artist Philippe Foré designed many posters. pic.twitter.com/Jm7Cyr97Hq

Then, in 1956, the government took up the issue of alcohol in school cafeterias, making it illegal (for the first time) for children under the age of 14 to drink wine at school, a practice which was common at the time.

But for Romeville, who has studied wine for over 30 years, government intervention is not responsible for the drop in wine consumption over the years, but rather the change in the French economy.

“It’s definitely a result of how work has changed over the last thirty years,” said Romeville.

“After World War II, we had to rebuild everything, so there was a lot of physical labour to be done. At the time, France was also still a largely rural country – it was a country of agrarian production. We had workers in the cities and workers in the fields, and these people had  to do very hard physical labour, so they needed energy.

The average worker might consume a litre of wine per meal, especially around lunchtime because they needed an energy source. But now France has changed: more people work in offices and people drink less.”

A Move Toward Quality over Quantity

Wine writer and historian Rod Phillips explains that drinking must be seen in a socio-cultural context: “Working in offices is a change in the context of many people’s daily routines. People are less likely to drink a lot, especially at lunch time, when they have to go back to work in the afternoon,” said Phillips.

The thirty years after World War II in France are still colloquially referred to as “Les Trente Glorieuses,” (The Thirty Glorious Years). It was a time when the French economy grew rapidly, and French standards of living – as well as salaries – significantly increased. According to Romeville, so too did the way the French viewed wine.

As the world globalised and scientific knowledge about what is truly included in terroir grew, wine production techniques became more advanced, allowing for a higher quality of wine to be produced. 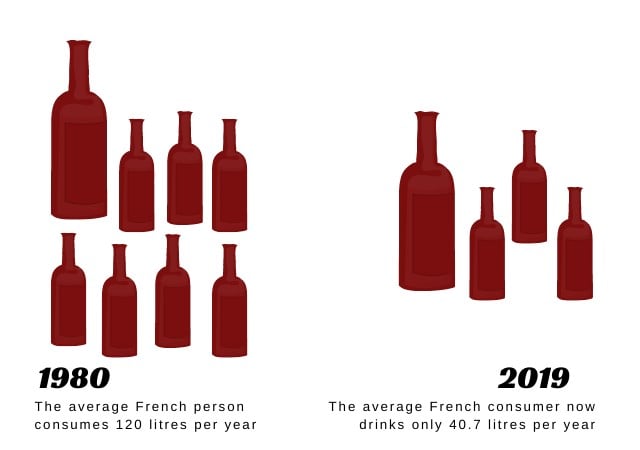 Once only a luxury of the upper classes, demand for fine wine has expanded to the middle classes, particularly in the last thirty years, according to Phillips.

“Now, among middle class people, women and men, and younger people, wine has become a sign of sophistication. This used to be mostly older, wealthy men,” he said.

So people started to drink less, but began to buy better. In 1980, more than half of French adults consumed wine on a daily. Today, only about 10 percent of French adults report daily consumption.

“Knowing something about wine, knowing producers or varieties – it is a lifestyle thing now. That is fairly new. I would put that back to the late 1990s and early 2000s. It now has this caché among a broader band of the demographics than it used to.”

What about public health?

The other major factor that influenced the decrease in wine consumption is increasing awareness of the health risks.

The Loi Evin, passed in 1991 and still in effect today, regulates advertising and mass communication for alcohol and tobacco. One of the primary goals with passing the law was to decrease alcoholism, as well as to protect children and young people from alcohol advertising by adding a disclaimer that alcohol abuse carries serious health ramifications.

READ MORE: Why do the French live so long?

In contrast to the “French Paradox,” the idea claiming a glass of wine a day keeps the doctor away, a recent study on Europeans’ found that the French are changing their attitudes on the ‘healthiness of wine,’ specifically as a result of policies advising constraints on wine consumption.

Phillips echoed this theory, “I think health is one thing. For a long time there has been this idea in France that wine is good for you, I think that has changed dramatically.”

But for Romeville, the effects of Loi Evin have only stood to harm French drinking habits, by indirectly introducing more binge drinking.

“The law [Evin] taught people alcohol was bad for their health,” said Romeville. “Now there is less consumption per day, but more consumption per sitting.” To him, the more restrictive the laws around drinking, the more it will encourage indulgent drinking habits, rather than “a healthy one or two glasses a day.”

Dr. Guillaume Airagnes, a psychiatrist specialising in addiction at the Georges-Pompidou Hospital in Paris, co-authored a report on the negative impacts of alcohol consumption. He told the Irish Times that “There is no such thing as alcohol consumption that is beneficial to health,” refuting the age-old French Paradox.

Even with diminishing levels of consumption, the study still found that almost 30 percent of the French population has some level of alcohol dependency.

Though public health officials might be cheering a steady decrease in drinking, the shift is not as popular amongst politicians, or institutions that exist to protect France’s wine industry – including the Department of Agriculture.

In 2019, France’s then Agriculture Minister Didier Guillaume blamed mixers and hard liquor for binge drinking, arguing that wine “isn’t like other alcohols.”

In a similar vein, President Emmanuel Macron said he did not plan on proposing any further legislation to curb alcohol consumption, adding: “Personally, I drink wine at lunch and dinner.”

The health ministry’s current guidance is that you should have no more than two glasses of wine per day, not exceed 10 per week and should not drink not every day.