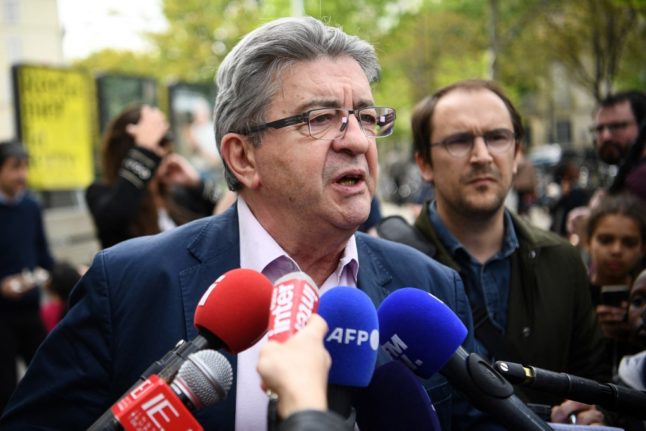 The left fielded a total of six candidates in France’s April presidential election, splitting the vote. All of them were eliminated in the first round.

The hard-left La France Insoumise (LFI) party, the Socialists, the Greens and the Communists are now attempting to agree a united front before a weekend deadline ahead of the June 12th and 19th polls.

READ ALSO French parliamentary elections – why are they important?

“I’m very hopeful that these negotiations will come to a successful end in the next few hours,” the head of the environmentalist Green party, Julien Bayou, told the France 2 channel.

“We can agree on the fundamentals and much more,” he said, adding that “a deal was in sight” between his party and France Unbowed, known in French by its initials LFI.

The multi-party talks are being led by LFI chief Jean-Luc Mélenchon, who finished third in the presidential election and now the dominant figure on the French left.

The 70-year-old former Trotskyist has declared his aim of becoming prime minister under Macron in order to block the president’s reform plans which include raising the retirement age.

The Socialist Party, which is fighting for survival after winning less than two percent in the presidential election, indicated Friday that it could broadly accept 12 core policy proposals by Mélenchon.

These include raising the minimum wage, reducing the retirement age to 60 and rolling back labour market reforms.

But the party then suspended talks and called for a “guarantee” that all parties would be respected in the alliance and that Melenchon “ends any hegemonic way of thinking.”

Analysts say that any alliance will require left-wing parties to overcome historic rivalries and hammer out a tricky agreement to divide up parliamentary constituencies.

The talks are part of a restructuring of French politics following Macron’s re-election triumph over far-right candidate Marine Le Pen in the second round last Sunday.

With France’s traditional left- and right-wing parties pushed to the margins, three new dominant blocs have emerged – Macron in the centre, Le Pen on the right and Mélenchon on the left.

Former Socialist president François Hollande, who is known to be keen to re-enter politics, has warned the proposed left-wing tie up could amount to the “disappearance” of the Socialists.

But political scientist Remi Lefebvre told AFP that the party “has absolutely no other option” than the deal because it risks losing “most” of its MPs in June.

Melenchon, who scored 22 percent of the first-round presidential vote, has also been talking to the Communist Party, whose candidate Fabien Roussel scored 2.3 percent in the presidential vote. Roussel, however, warned on Thursday that talks were at a “standstill”.

On the far-right, Le Pen looks set to spurn a suggestion of formally combining forces with far-right rival Eric Zemmour with whom she has clashed repeatedly.

A recent poll by the Harris Interactive group suggested that her far-right Rassemblement National party could win 75-105 seats in the 577-seat national assembly without a Zemmour alliance.

Many centre-right politicians from the Republicans party of former president Nicolas Sarkozy are expected to defect to one of several centrist or centre-right movements backing Macron.

The 44-year-old head of state is preparing to name a new government headed by a fresh prime minister who will be “attached to environmental, social and productivity issues”.

“There will be some elements of continuity and new elements,” he said of his new government during a trip to the southern Pyrenees mountains on Friday.