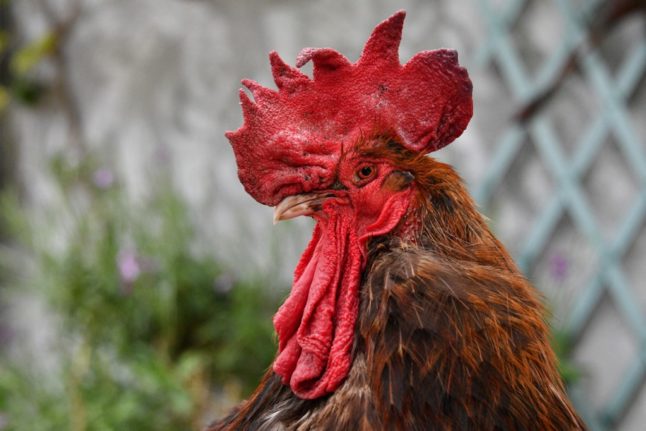 A neighbour in south west France, fed up with the bird’s crowing, has taken the owner to court.

But she could be spared a penalty under new legislation protecting the “sensory heritage” of the countryside, from noisy church bells to the smell of farmyard animals.

The rooster’s owner in the village of Oursbelille, 150 kilometres southwest of Toulouse, has faced repeated complaints and is set to appear in court in June.

“It all started in 2019. The owner of the house next door – who comes only twice a year on vacation – (he) came to see me and demand that I get rid of my rooster,” said the owner, who asked to remain anonymous.

Attempts to find a compromise failed, she told AFP, “because the only solution Monsieur proposed was that we get rid of our animal.

“That’s out of the question.”

The case recalls a series of recent disputes pitting villagers with small farms against other residents, often newcomers or vacationers in search of rural tranquillity.

In another bird-based battle that made headlines worldwide, Maurice the rooster and his owner emerged victorious from a legal wrangle with neighbours in September 2019, with judges rejecting claims of disturbing the peace.

But such disputes have been known to become violent. Tens of thousands of people signed a petition in August 2020 seeking justice for Marcel, a rooster shot and killed by a neighbour in Vinzieux, southern France.

Such incidents spurred lawmakers to enact the rural heritage law in January 2021, enshrining the status of countryside staples such as quacking ducks and pre-dawn tractors, as well as cowbells and the smell of cow dung.

“Once again we’re dealing with recent arrivals who come to the countryside and cannot stand, or barely, these natural sounds,” said Stephane Jaffrain, the lawyer for Pitikok’s owner.

The neighbour, a pensioner, claims it is a straightforward case of “excessive disturbance by a neighbour,” and is seeking €6,000 in damages at a trial set for June 7th.

“It’s causing genuine suffering for my client,” lawyer Anne Bacarat said. “He’s battling cancer and has heart problems and tinnitus,” or ringing in the ears.