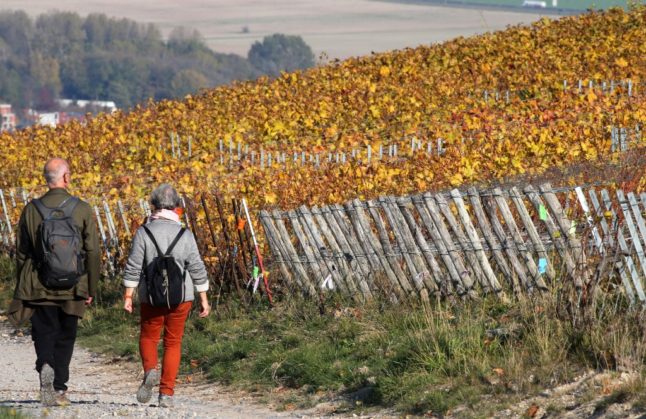 Does French wine lead to a long life? Sadly, there's no science to back this up. Photo by FRANCOIS NASCIMBENI / AFP

Sister André became officially the world’s oldest person on Monday after the previous holder of the title – a Japanese woman aged 119 – died.

Japan and Italy are both well-known for having larger numbers of people who live longer than average, but while isn’t one of these ‘blue zones’ statistics show that French people often live long and health lives.

The official figures from 2019 show French life expectancy at 85.3 years for females and 79.4 years for males – among the highest in world.

Figures from 2020 are likely to be skewed by the Covid pandemic, in which the elderly were worst affected.

But as well as living long lives, the French also tend to live healthy lives – pre-pandemic, women on average in France could expect to live until the age of 64.5 years without suffering any debilitating health problem, while the average age for men living a healthy life was 63.4 years.

The figures are based on statistics used to draw up the Healthy Life Years indicator (HLY), a Europe-wide structural indicator compiled by the European Union’s statistics body, Eurostat.

The HLY is basically a way to express disability-free life expectancy.

So what’s the secret?

Disappointingly, there is no evidence of a ‘magic ingredient’ in wine or cheese that leads to increased longevity – although there’s plenty of evidence that regular but moderate consumption of good wine and nice cheeses leads to a happy life.

A big factor in this is healthcare – France’s healthcare system is excellent and covers everyone who is resident here, so there’s no barrier to treatment if people need it.

The DREES figures show that disability-free life expectancy for people in France who have reached the age of 65 in good health has gone up for both men and women over the past decade  – by one year and five months for men and one year and two months for women.

The men in this category can expect to live another 10.1 years in good health, while women can expect a further 11.2 years of good health, and that’s largely thought to be down to healthcare – improving treatments for illnesses and better preventative healthcare such as screening programmes.

There’s also the pension age – French people retire comparatively early so are less likely to be still working when they do develop health problems.

For those who are still working there are also generous allowances for holidays and sick pay, so that burnout tends to be less of a problem in France than other countries.

The current standard pension age in France is 62, although newly-reelected Emmanuel Macron says that he wants to raise this to 65.

Then there’s the general health of the population.

It’s a boring but true fact that people who are in good general health – are a healthy weight, don’t smoke and drink only in moderation – are statistically more likely to make old bones.

France, along with Italy, has one of the lowest obesity rates in the EU, but it is rising and more than half of French people are now overweight.

When it comes to smoking France still has a reputation as the ‘chimney of Europe’, but that’s a bit unfair. Smoking rates are now slightly lower than the EU average of 18.4 percent of the population and have been steadily falling for decades. The government runs regular anti-smoking campaigns and has also been steadily hiking the price of cigarettes so that most brands are now more than €10 a carton.

When it comes to drinking, the ‘Anglo Saxon habit’ of binge drinking might be on the rise, but in general the French are drinking less and just 10 percent of people drink every day.

MAP Where in France do people drink the most?

The number of road deaths has also been steadily falling in recent years and in global terms France has a low rate of workplace accidents.

So which countries have the longest life expectancy?

According to Our World in Data, France is 14th in the world when it comes to life expectancy and, like most wealthy countries, has seen a steady increase in lifespans over the past 150 years (with two obvious dips during World War I and II). Neighbouring Italy, Spain and Switzerland all have longer life expectancy, but France beats the European average and the UK and US.

And here’s the global averages.