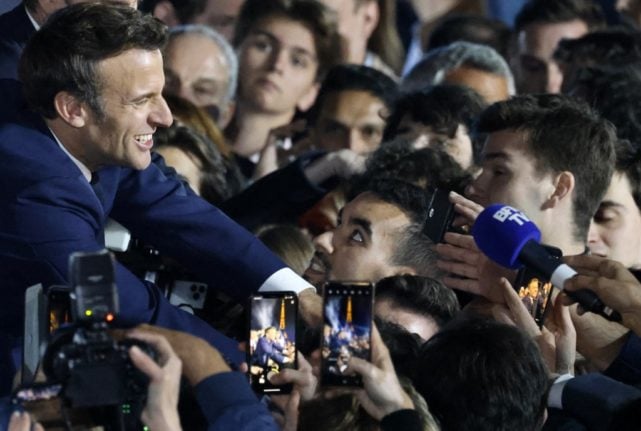 Emmanuel Macron with supporters at his victory party at the Eiffel Tower. Photo by Ludovic MARIN / AFP

You might be forgiven for overlooking that fact amidst all the grudging French, and British, media commentary pointing to the “divided” France which voted (or failed to vote) yesterday.

Macron won by 17 points, a margin greater than any the final opinion polls had foreseen last Friday. France has, for the second time, rebuffed the wave of destructive nationalism which engulfed Britain and the United States in 2016.

As it happened: Macron wins re-election for a second term as French president

Both France and the President deserve great credit for that. Almost six in ten voters on Sunday rejected Marine Le Pen’s muddled and dishonest attempt to pass off inward-looking intolerance as patriotism.

Now the bad news. France is deeply divided. Whether it is more divided than other countries, including the US and the UK, is open to question. I doubt it.

The fact remains that almost 42 percent of French voters who cast a valid ballot supported a far right party whose roots go back to the collaborationist Vichy regime of World War II.

In the 2017 election, that total was 34 percent – a  score which carried over almost exactly to the combined total of the three far-right candidates in the first round of this Presidential election two weeks ago.

Will the Far Right 42 percent of Sunday carry over into the first round in 2027? Not all of it will but some of it may.  The taboo against voting for the far right is like a Ming vase: once broken it is broken.

It is also disturbing that 28 percent of registered voters stayed at home (the highest for 53 years). It is equally disturbing that over 8 percent of those who voted cast blank or spoiled ballots. Overall, that is 15,000,000 people who declined or actively refused to vote for either candidate.

As for “a deeply divided France”, the demography of the vote does broadly sketch a picture of Two Nations, a well-off, well-educated and successful “pro-Macron” France and a poorer, less educated and unhappy “pro-Le Pen” France.

More than 70 percent of comfortable or wealthy voters chose a Macron ballot. Around 65 percent of the poor or struggling voted Le Pen. Almost three quarters of people with a higher education voted Macron. Over 60 percent of people who did not have their baccaulaureat (high-school leaving qualification) voted Le Pen.

In terms of the age of voters, the small-print of the vote is more complex – and more encouraging. The very youngest voters, the 18-24s, if they voted all, went 6 out of ten for Macron.

Geographically, the vote was also complex – more complex than the standard image of a “successful” metropolitan France and a struggling rural and outer suburban France.

Macron’s vote held up pretty well in many small towns. The only regions that Le Pen “won” in mainland France were the far-right strongholds of the north west (Hauts-de-France) and south east (Provence-Alpes-Côte-d’Azur).

Macron’s greatest success is now his greatest problem. Something like half his 18,779,641 votes came from the Left and the Greens. They voted more anti-Le Pen than they did pro-Macron.

Arguably, French elections have always been that way. The winning candidate could only triumph in Round Two by attracting the votes of some of the losing candidates in Round One.

But something important has changed. It used to be a case of a moderate left or moderate right candidate assembling votes from his or her own wider camp. All, or most of, the Right or Left voters felt they had some kind of stake in, say, a Chirac or a Mitterrand.

Now, as I argued last week, France has been cut in three.

Some of the left wing “third” of the electorate will lend their votes to Macron to beat Le Pen. They don’t feel they have any stake in him. In many cases, they dislike or detest him.

Macron will therefore  start his new term as a minority President. He said in his rather limp acceptance speech in front of the Eiffel Tower that he would govern for “all of France” and show his gratitude to his one-day-only supporters from the Left.

That is easier said then done. The parliamentary elections in June will decide whether Macron can do anything much at all in the next five years.

READ ALSO Parliamentary elections – what happens and why is it important?

On the whole, I believe that his centrist party and allies WILL win a working majority in the new National Assembly on June 12th and 19th. I do not foresee Macron having to surrender power to a Prime Minister Jean-Luc Mélenchon or a Prime Minister Marine Le Pen or Eric Zemmour.

But that’s a complex issue which had better wait for another column.

This was the country’s second Brexit-Trump moment in five years. Divided it may be; troubled it may be. France has refused to follow Britain and the US on the path to self-harming populism.