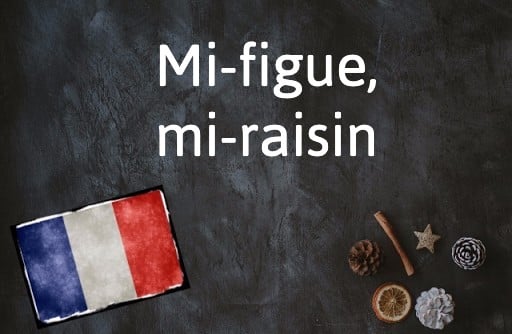 [Être] mi-figue, mi-raisin – pronounced mee-feeg, mee-rayzan – literally translates as ‘half fig, half grape’ but it’s got nothing to do with fruit.

It describes the emotional state of being in between, or ambivalent, of having two different feelings while not feeling particularly tied to one or the other.

It can also describe having a mixed opinion on a particular subject.

In English we might say we’re ‘in two minds about’ a subject or we’re ‘on the fence’ on a particular topic.

The phrase is an old one, likely originating in the 14th century during Lent (the period of fasting observed by Catholics for forty days prior to Easter). During this time, people made large baskets of dried fruits, typically filled with figs and grapes. The two fruits were pitted against one another: grapes, the more expensive fruit, were preferred for their sweet taste, while figs were popular due to their affordability. To express ambivalence, congregants could say they were simply mi-figue, mi-raisin.

The expression can be written either with or without a comma between the two fruits, but it is essential that the fig always goes before the raisin.

Je ne sais pas pour qui voter. Je suis mi-figue, mi-raisin – I do not know who to vote for. I’m in two minds.

Elle n’est pas totalement contre la proposition, mais elle n’est pas non plus pour. Elle est mi-figue, mi-raisin. – She is not totally against the proposal, but she also isn’t in favour of it. She’s ambivalent