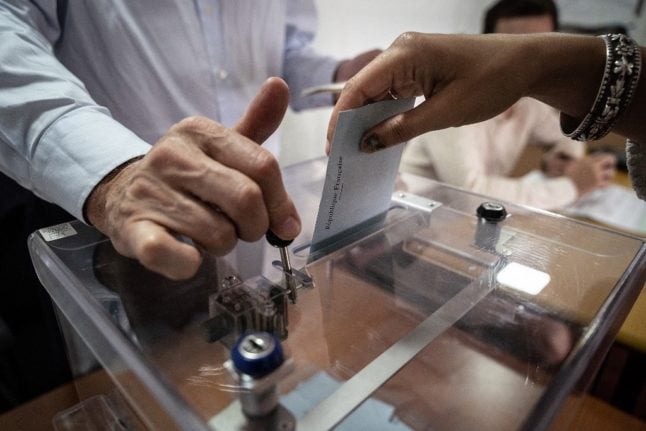 There's more voting to come in France in the parliamentary elections in June. Photo by SIMON WOLFHART/STR / AFP

Parliamentary elections take place in June. Like the presidential elections they take place over two rounds, but this time there is just a week between the two rounds – on June 12th and 19th.

Candidates have until May 20th to file nomination papers with the préfecture and then the campaign officially begins on May 30th.

The parliamentary elections are to vote for députés, roughly equivalent of MPs in the UK, who represent a geographical area and who sit in the Assemblée nationale, the lower house of the French parliament.

There are 577 députés, each representing a geographical area of about 125,000 inhabitants. Constituencies, known as circonscriptions in French, are therefore generally considerably smaller than départements.

The députés have a mandate of five years, and the entire assembly is up for re-election every five years.

There are also députés who represent French citizens living overseas and they have their own ‘constituencies’ which basically divide the world into areas – northern Europe, southern Europe, Americas etc.

How does the voting system work?

Unsurprisingly, there’s quite a complex system for voting.

In the first round on June 12th, voters can pick anyone on the ballot paper.

If one candidate gets more than 50 percent of the vote, they are elected and there is no need for a second round.

If no-one scores higher than 50 percent there is a second round. Unlike in the presidential election, there can be more than two candidates in the second round – the two highest scoring candidates go through plus anyone who has achieved more than 12.5 percent of the vote.

Voters then go back to the polling station on June 19th and vote again, and this time the person with the highest score is elected.

When the vote is over each député is confirmed as representing a particular area, and they are considered responsible for looking out for the interests of their constituents, campaigning on local issues etc.

They are also issued with their official tricolour sashes, which they wear on formal occasions.

Why are these elections important?

Because the députés form party-based voting blocks in the parliament.

The president is elected separately in a direct-vote system, but once in power still needs the support of the Assemblée nationale in order to get any laws passed.

At present Macron’s La République en Marche party is the biggest block in the parliament, and by forming an alliance with two other parties has commanded a large majority which has enabled Macron to pass legislation relatively easily over the past five years.

This could change in June.

If a president’s party doesn’t have a majority in the Assemblée nationale, they can try to form an alliance with other parties in order to create a block that will, mostly, vote in favour of the government’s reforms.

If this is impossible then a cohabitation is created. This means that the leader of the largest block in the parliament offers to serve as Prime Minister to the president – even if they are members of opposing parties.

It’s far from an ideal situation for the president, but it means that they at least have a voting majority in the parliament, even if they will almost certainly be forced to make some policy concessions in exchange for the support of their prime minister.

This happened to leftwinger François Mitterand, who was forced to appoint Jacques Chirac as his prime minister after a crushing defeat in parliamentary elections. Chirac went on to be elected president, only to be forced to appoint the leftwing Lionel Jospin as his prime minister when he too was unable to get a majority in the parliamentary elections.

In both cases, however, the defeats at parliamentary level came several years after they won the presidency, the system has since been changed so that both presidential and parliamentary elections are on a five-year cycle.

Voter turn-out for the parliamentary elections in France is far lower than for the presidential election.

Will they ever introduce proportional representation in parliamentary elections?

There has been increasing pressure in recent years to reform the parliamentary elections system to introduce proportional representation or at least an element of it.

Parties like Marine Le Pen’s far-right Rassemblement National (National Rally, formerly National Front) favour it because it would in theory give them a greater share of MPs in parliament and therefor more influence.

Political analysts have long claimed the electoral system and lack of representation for fringe groups is one of the reasons that has lead to high abstention rates in elections as well as unrest on the streets such as the Gilets Jaunes crisis.

In 2017 Macron had promised to introduce PR but then the government failed to go through with it. Perhaps memories are still fresh of when France did introduce it to the parliamentary elections back in 1986. This led to the election of 35 National Front MPs which caused uproar among traditional left and right parties. The policy was then ditched in 1988 – just two years later.

Those who argue against it says it hampers the government’s ability to put in place reforms and leads to a blockage in which a president can get little done.

A proposed solution is to have an element of PR introduced but not for all 577 deputies to be elected using the system. Whether this reform ever happens or not, only time will tell.

What about the Senate?

The Senate is currently dominated by the centre-right Les Républicains party, and the next Senate elections are not until 2023.