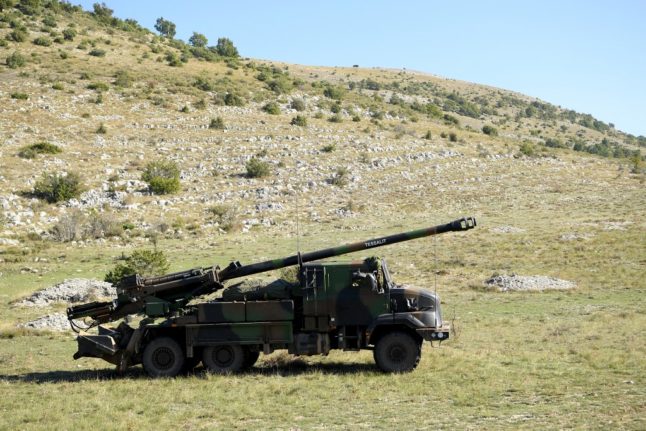 A French Caesar (a truck equipped with an artillery system) with a self-propelled howitzer on board, one of the types of heavy artillery France is delivering to Ukraine. Nicolas TUCAT / AFP

“I think we have to continue on this route. Always with the red line that we will not become parties to the conflict.”

Built by partly state-owned arms maker Nexter, the Caesar is a 155mm howitzer mounted on a six-wheeled truck chassis, capable of firing shells at ranges of more than 40 kilometres (25 miles).

Macron’s Elysee Palace office did not reveal how many missiles and howitzers France would provide when contacted by AFP, saying that it did not want to reveal “operational information”.

But it added that the anti-tank missiles had already been delivered, while the howitzers would move “in the coming days”.

Around 40 Ukrainian soldiers will be trained in France on the weapons’ use from Saturday, the presidency said.

Although some countries like the US have been quick to respond, others — notably EU heavyweight Germany — fear further antagonising Moscow by delivering more powerful arms for Ukraine.

“There is no textbook for this situation where you can look up at what point we will be seen as party to the conflict,” Chancellor Olaf Scholz told weekly Der Spiegel on Friday.

But he added that Europe’s top economy would replace Soviet-made weapons sent to Ukraine from eastern NATO and EU allies, including Slovenia, with new, German-made ones.

“This is a debate that goes to the heart of Germany’s political life, it’s a sovereign choice that belongs to Germany and we respect it,” Macron told Ouest-France, adding that he had recently spoken to Scholz.

“We have the same strategy as the chancellor, which is to say that we will aid the Ukrainians as much as possible but must be careful never to become parties to the conflict.”