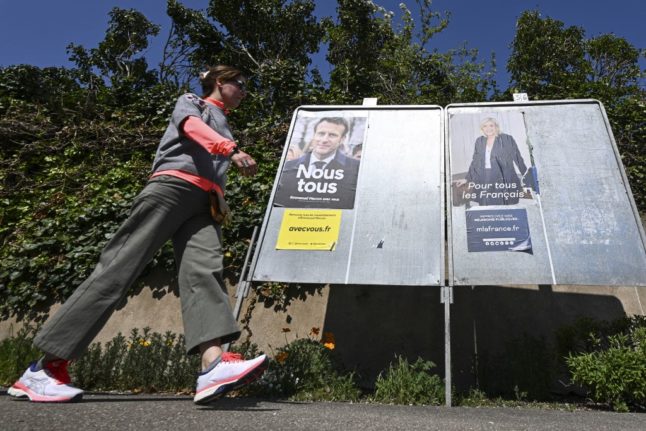 Voting for the second round starts on Sunday morning. Photo by SEBASTIEN BOZON / AFP

What happens on Sunday?

The format of the voting is the same as it was in the first round on April 10th – polling stations open at 8am on Sunday and close at 7pm in most places, but the big cities have the option to keep stations open until 8pm and most of them have taken up that option.

In French overseas territories voting starts on Saturday so that votes can be counted in time for the deadline in mainland France, and there will also be polling stations around the world to allow French people living overseas to vote.

At 8pm on Sunday we get the preliminary result – as with the first round these are sample votes from specially selected polling stations.

READ ALSO How do the French produce such accurate early election results?

If the result is extremely close, there is the option not to release early results and wait for a full count, but usually preliminary results are released at 8pm.

Counting goes on through the night and the Interior Ministry releases the final, completed count on Monday morning. It is usually only 1-2 percent different to the preliminary result.

So by shortly after 8pm on polling day, we’ll should be pretty sure who will be the next president of France.

You can follow all the latest events as they happen on Sunday evening on The Local’s live blog.

What happens if Macron wins?

If Macron wins he will be the first French president to win re-election in 20 years – since Jacques Chirac beat Marine Le Pen’s father Jean-Marie to win a second presidential term in 2002.

READ ALSO Why do the French rarely re-elect their presidents?

His team has booked the Champ-de-Mars, just under the Eiffel Tower, for Sunday night, so if he wins, this is where he will make his victory speech.

As the incumbent, he stays in the Elysée and carries on governing, there is no transition period, although there will be an inauguration which will have to take place by May 14th, when Macron’s current term ends.

We do already know, however, that Prime Minister Jean Castex will resign and dissolve the government.

This is pretty standard and allows Macron to reshuffle his government ahead of the parliamentary elections in June.

Some of his ministers will probably stay in position, but others will move jobs and Macron will also be able to bring in people from the outside. There’s been some discussion about whether he might appoint Christine Lagarde – head of the European Central Bank and a former French finance minister under Nicolas Sarkozy – as his Prime Minister.

The resignation will happen some time in the week following Sunday’s vote, according to (current) government spokesman Gabriel Attal.

What happens if Le Pen wins?

If Le Pen wins, there’s obviously a handover of power which must happen some time before Macron’s current mandate expires on May 14th. There will be an inauguration ceremony to swear her in as president, and she will make history by becoming France’s first female president.

Macron will have to move out of the Elysée – which is the home as well as the office of French presidents – and as we know from his financial statement at the start of the election campaign he doesn’t actually own any property, so he’ll need to find somewhere to live. Brigitte Macron owns a house in the resort of Le Touquet, though, so maybe they’ll take a break by the sea.

Meanwhile Le Pen will move into the Elysée, presumably bringing her four cats with her.

For Le Pen the focus will be on forming a government – and this could be difficult for her as she doesn’t have many figures in her party who have much relevant experience to become ministers and she’s already ruled out bringing some people into her government, including her extreme-right rival Eric Zemmour and her niece Marion Maréchal, who defected to Zemmour a few weeks ago.

What happens in June?

This isn’t the end of election season because we have more elections in June and whoever wins will have to start campaigning pretty much straight away for those.

These are the parliamentary elections. Again there’s two rounds of voting, this time with just a week between them on June 12th and 19th.

In these elections the French get to elect their local representative, known as a député, which is roughly equivalent to an MP in the UK. They sit in the Assemblée nationale, the lower house of parliament in France.

They’re crucial to the president, because any laws that he or she wishes to pass have to be debated and approved in the Assemblée nationale, so if you don’t have a majority of supporters in the parliament you may be pretty limited in what you can do.

There are several mechanisms in the French political structure that allow laws to bypass parliament – there’s something called Article 49.3 that can be used to push blocked laws through parliament – Macron used that to push through his controversial pension reforms in 2020 – and there’s also the option of putting potential laws to a referendum.

A referendum means that – if the country votes in favour – you can skip steps like a review from the Constitutional Council. Le Pen has already said that she would use this mechanism to force through changes like a ban on the Muslim headscarf and discrimination against non-French citizens for jobs and benefits, which the Council would be likely to rule unconstitutional.

But even with these mechanisms, a president who doesn’t have a majority in parliament is going to have a tough time, so it will be an important campaign.

Once parliamentary elections are out of the way we’re nearly into les grandes vacances, so we can all take a well-earned break from politics and head for the beach.