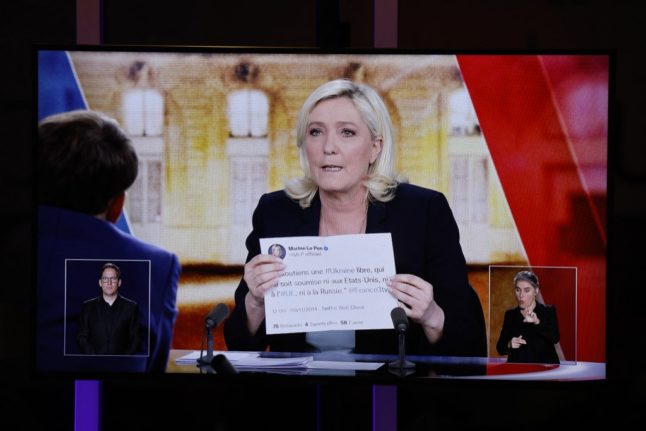 Marine Le Pen shows a printout of a tweet supporting Ukraine when attacked over her links to Russia. Photo by Ludovic MARIN / AFP

Do Le Pen’s figures really not add up? Is Macron a climate sceptic or a climate hypocrite? And who the hell is Gérard Magax?

Here’s a look at the claims and counter-claims in the debate.

Is Le Pen truly in debt to Putin?

Macron accusing her of being “dependent” on the Kremlin, describing the Russian leader as her “banker”.

This refers to a €9 million loan that Le Pen took from First Czech Russian Bank to finance her 2017 election campaign, much of this has not been repaid.

French political parties are now banned from taking financing from outside the EU, so for her 2022 campaign Le Pen went to banks in Hungary for loans, totalling €10 million.

Macron described First Czech Russian Bank as “close to the Russian government” and said it meant that Le Pen was beholden to the Russian leader. She insisted she was a “free woman” and that her loans were from foreign banks because French banks would not lend to her.

Le Pen has certainly been friendly to Putin – her election campaign leaflet featured a picture of the pair of them shaking hands, which had to be hastily pulped after the invasion of Ukraine. Even since the invasion she has taken a much softer line than many other politicians, opposing sanctions and saying that she hopes to have Russia as an ally once the war is over.

She also promoted the Russian Sputnik vaccine during the Covid pandemic, and called for it to be rolled out in France.

How much of this is because of her debts and how much is her personal conviction, however, is impossible to say.

Pensions were a tricky issue for Macron – his proposal to raise the retirement age to 65 has been very unpopular and he has been backtracking in recent days.

Le Pen has an easier sell with her policy, which is to reduce the pension age to 60 for anyone who started work before the age of 20. Broadly, she wants to make retirement about how long you have worked, not your age.

But how much will her plan cost?

Macron called Le Pen a “climate sceptic”, she responded by calling him a “climate hypocrite”.

Neither of them has the best record on environmental issues – the subject is barely mentioned in Le Pen’s manifesto while Macron has been accused of dragging his feet on climate issues over the past five years.

The issue – a global crisis that threatens the future of the entire planet – took up around 10 minutes of the 2 hour 45 minute debate.

She accused Macron of hypocrisy, saying that he was building wind farms all along the coast apart from at Le Touquet, where he and his wife have a holiday home.

It’s true that a project for a 40-turbine farm off the coast of Le Touquet was suspended in 2017 by the then-environment minister Nicolas Hulot, after consultation with stakeholders. Hulot later resigned from the government, accusing Macron of dragging his feet on environmental issues. He’s had plenty of bad words for the president since, but has never made any allegations of interference in the Le Touquet wind farm.

Has the EU flag ‘replaced’ the French flag?

A longtime Eurosceptic (although she has dropped her plans for a Frexit, and now wants to stay in the EU but not follow its rules), Le Pen made plenty of jabs at the Europhile Macron.

As well as saying that France doesn’t defend its interests at an EU level, Le Pen also accused Macron of “replacing” the French flag with an EU flag.

Le Pen has just asserted that France doesn't defend its interests in the EU. Seriously. Short of sending French paratroops into Brussels it's hard to imagine how much more determined they could be.

On most public buildings such as schools and mairies, the French and EU flags fly side by side, with the option for a third flag for particular occasions such as the rainbow flag for Pride month. Many mairies are currently also flying the Ukrainian flag as a gesture of solidarity.

It’s usual for French government ministers to give briefings with both the French and EU flags in the background.

Le Pen was probably referring to a moment earlier this year when the EU flag was flown on its own underneath the Arc de Triomphe.

This was intended to mark France taking over the presidency of the EU, and was there for just a couple of days, although it attracted plenty of criticism from politicians on the right.

Taking aim at the vagueness of some of Le Pen’s costing, Macron said: “It’s not Gerard Majax (on TV) this evening. You never explain how you will finance your projects and you are not honest with people.”

In case you’re not familiar, Gérard Majax is a French conjourer who was popular on TV in the 1980s.

Don’t feel too bad about not knowing that, although remaining popular with the older demographic, many younger French people had to resort to Google to find out who Macron was talking about.