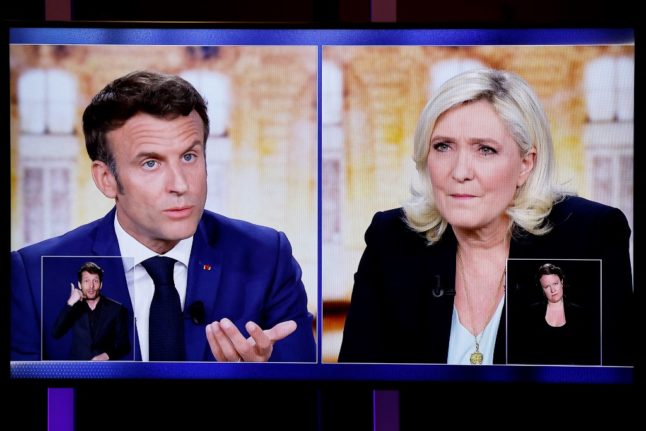 Whether you agree with Macron’s economic policies, one thing has always been clear is that he’s very comfortable defending his financial ideas and justifying them with figures and data.

The first segment of Wednesday’s debate was on the question of le pouvoir d’achat or spending power of ordinary French people. It should have a been a subject that offered Le Pen a chance to land some punches.

Le Pen has promised to cut VAT on 100 essential products from 5.5 percent to 0 in a bid to ease the cost of living crisis.

Macron hit back saying the policy was “ineffective” because it would lead to very little money going back into empty pockets and that it was also “unjust” because it would benefit the country’s rich – like himself, Le Pen and the TV journalists hosting the debate.

For his part Macron proposes food cheques for the poorest families which he says is “more effective and fairer”.

He also hit out at Le Pen for appearing to suggest workers’ wages would rise by 10 percent.

“A president of the republic cannot decide on salaries for the employer. You will not choose the wages,” he said.

Later in the debate Macron attacked his rival saying “you never explain how you will finance your reforms”.

Le Pen’s economic policies have been attacked as fantasy by many of her critics in recent weeks and it’s unlikely she did anything during the debate to convince those critics that her policies were achievable and affordable.

‘I am a totally free woman’

As expected Marine Le Pen was forced to defend her links to Russia and its president Vladimir Putin, now described as a war criminal by leaders such as US President Joe Biden because crimes committed during the invasion of Ukraine.

Macron accusing her of being “dependent” on the Kremlin, describing the Russian leader as her “banker”.

Le Pen hit back insisting that she was “an absolutely and totally free woman” and that her aim was only to defend French interests.

“If I was forced to go and make a loan abroad it was because no French bank agreed to grant me a loan,” she said adding that Macron had welcomed Vladimir Putin to the presidential retreat of Bregançon in 2017.

Le Pen stressed that she was in favour of all the sanctions against Moscow announced since Russian leader Vladimir Putin ordered an invasion of Ukraine on February 24, and she backed supplying arms to Ukraine.

At one point she pulled out a printed Tweet to defend what she had previously said about defending a free and sovereign Ukraine. Predictably the moment quickly became a new internet meme.

In the run-up the debate Macron reportedly blew his top with his advisers who repeatedly warned him not to come across as arrogant. It’s a personality trait the president has long been criticised for and given as one of the reasons for why many voters refuse to back him.

“Stop telling me not be arrogant. It’s not a yoga class,” Macron reportedly shouted.

According to many viewers on Twitter and perhaps Le Pen, who at one point told him “don’t give me any lessons”, Macron didn’t take the advice of his advisers.

Many posted a picture on Twitter of Macron resting his chin on his hands looking pitiful towards Le Pen. They accused him of being condescending and insolent.

“Macron is making the tactical mistake of treating her with condescension and disdain. He should forget her and speak to French voters with conviction and sincerity,” said Dr Matthew Fraser from the American University of Paris on Twitter.

Le Pen is not performing well, her mind is not sharp enough for debate at this level. Macron however is making the tactical mistake of treating her with condescension and disdain. He should forget her and speak to French voters with conviction and sincerity. #debatmacronlepen

Macron repeatedly interrupted Le Pen, no doubt to try to destabilise her and knock her off course and was frequently told by the hosts to let Le Pen finish her answers.

When she cited increased debt under Macron, he replied: “Oh dear, oh dear. Stop. you’re getting everything confused.”

Risk of ‘civil war’ in France

One of the most animated parts of the debate, as might have been expected, surrounded Islam and in particular Marine Le Pen’s plan to ban the Muslim headscarf in public places in France.

“I am in favour the banning of the headscarf in the public space”, said Le Pen justifying the plan by saying the “the veil is a uniform imposed by the Islamists”.

“We need to liberate these women,” she said.

Macron hit back, knowing that the planned ban has had Le Pen on shaky ground in recent days.

“France, the home of the Enlightenment and universalism, will become the first country in the world to ban religious symbols in public spaces. That’s
what you’re proposing, it doesn’t make sense,” he continued.

“You’re proposing how many policemen to go running after a headscarf or a kippa or a religious symbol?”

“You haven’t read my law,” said Le Pen. “Yes but I’ve read the French constitution,” said the president saying he would not support a ban on any religious symbols in public spaces.

The problem for Le Pen is that her policy on the Muslim headscarf does not appear to be one that has much support among voters outside her core. It’s one of her more extreme plans that undermines her efforts to have softened her image.

The argument was an easy win for Macron.

Neither of these two candidates are the strongest on environmental issues but they clashed nevertheless on the subject.

Macron has been criticised for his record over the last five years and for not making green issues a priority in his programme. Le Pen has been heavily criticised for wanting to tear down wind turbines across France and end the renewable energy source.

She accused Macron of wanting to build wind turbines everywhere off the French coast apart from Le Touquet on the Channel coast – where Macron and his wife have a holiday home.

“What are you joking?” replied Macron who described his rival as a climate sceptic highlight that her “22 measures for France” did not contain the word ecology. She hit back and said Macron was a “climate hypocrite”.

Given the climate crisis we might have expected ecology issues to be much more prominent in the debate and it perhaps would have been if Macron had been up against the far-left candidate Jean Luc Melenchon.

But it was a part of the debate that failed to ignite and many in France, especially the young, might be concerned by that.

Le Pen avoids humiliation of 2017 but fails to land punches

The priority for Le Pen was to avoid a repeat of the 2017 run-off debate where Macron managed to make her look flustered and sometimes not on top of her brief.

Her critics will say she struggled with facts and technical issues around certain subjects such as the economy and that she failed to justify her planned policies.

But her performance was not a disaster as it was in 2017 and that alone reflects a small victory for her.

However being behind in the polls by 8 to 10 points the pressure was on Le Pen to land some big punches. French political analysts noted she was strangely subdued at times and expected her to be on the offensive about Macron’s record in power.

Instead it was often the president who went on the attack highlighting his rival’s parliamentary vote record on certain issues such the move to cap energy prices which she voted against before saying she would continue the policy.

Le Pen’s task was to present herself to anti-Macron voters and those planning to abstain as a viable option to be the next president of France.

And she probably failed to do that to enough voters.