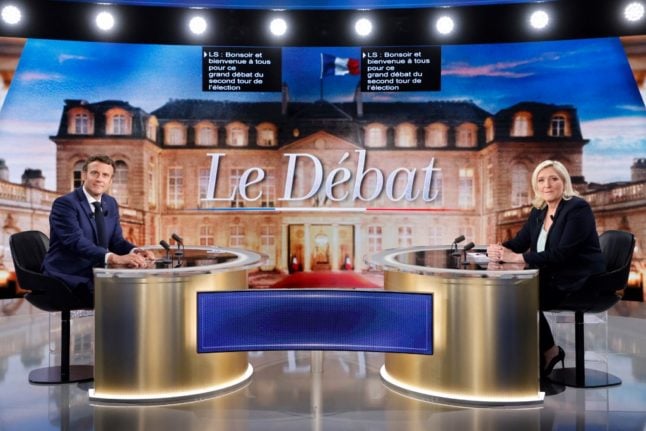 Probably the most animated moment was when the pair were asked about their plans for Muslim women who wear the hijab headscarf.

Macron warned that Le Pen risked sparking a “civil war” if she was elected and implemented her plans to ban the Muslim headscarf in public.

The pair also clashed over the cost-of-living crisis and Le Pen’s links to Vladimir Putin in a televised debate that last for almost three hours.

Le Pen confirmed that she stood by her controversial idea of banning the headscarf, which she called “a uniform imposed by Islamists”, but she said she was not “fighting against Islam.”

Macron responded: “You are going to cause a civil war. I say this sincerely.”

“France, the home of the Enlightenment and universalism, will become the first country in the world to ban religious symbols in public spaces. That’s what you’re proposing, it doesn’t make sense,” he continued.

“You’re proposing how many policemen to go running after a headscarf or a kippah or a religious symbol?”

Le Pen initially sought to play down the importance of the ban when asked about it, saying it was “causing excitement in the media these last few days although it is just one part of a whole”.

“I think we need to introduce a law against Islamist ideology. I’m not fighting against a religion, I’m not against Islam, which is a religion that has a place (in France),” she added.

“I’m fighting against Islamist ideology which is way of thinking that undermines the foundations of our republic, which undermines equality between men and women, undermines secularism, undermines democracy,” she said.

Le Pen said she had seen people “suffering” over the first five years of Macron’s rule and that “another choice is possible”.

“If the French people honour me with their confidence on Sunday, I will be a president for daily life, the value of work and purchasing power,” she said.

Macron replied that “we must and should improve people’s daily lives through major projects for the school and health systems”.

He claimed his measures to help household incomes were more effective than Le Pen’s and also said that France should become a “great ecological power of the 21st century”.

Macron comes out swinging at Le Pen over her Russian connections, telling her 'you're in Russia's grip' and referring to Putin as 'your banker'. She responds 'I am a patriot'#debatmacronlepen

Le Pen replied that she was “an absolutely and totally free woman” adding “I am a patriot”.

“It was because no French bank wanted to give me a loan,” she said.

The exchange was the first major clash between the two, with Macron also highlighting Le Pen’s decision to recognise Crimea as Russian after the Ukrainian territory was annexed by the Kremlin in 2014.

“Under international law we rarely recognise… territories that have been annexed by force,” he said.

Le Pen stressed that she was in favour of all the sanctions against Moscow announced since Russian leader Vladimir Putin ordered an invasion of Ukraine on February 24, and she backed supplying arms to Ukraine

“The aggression that Ukraine has been victim of was unacceptable,” she said.

She also held up a printout of one of her old tweets defending an independent Ukraine.

Le Pen created waves last week when she proposed closer ties between Western military alliance NATO and Russia once the war in Ukraine was over.

She also reaffirmed her intention of repeating France’s 1966 move of leaving NATO’s integrated military command, while still adhering to its key article 5 on mutual protection.

“You never explain how you will finance your projects and you are not honest with people,” Macron told Le Pen.

She in turn sought to put heat on the president, mocking how the “Mozart of finance” had left a “bad” economic legacy that included an extra €600 billion in national debt.

On the environment, Le Pen hit back at Macron’s accusation that she was “climate-sceptic” by calling him a “climate-hypocrite”.

Turning to Europe, Le Pen insisted she wanted to stay in the European Union but reform the bloc into an “alliance of nations”.

“Europe is not all or nothing,” she said, as Macron retorted that she appeared to be proposing something other than EU membership.

“Your policy is to leave Europe,” he said, describing the election as a “referendum for or against the EU”.

The priority for Le Pen was to avoid a repeat of the 2017 run-off debate where Macron managed to make her look flustered and sometimes not on top of her brief.

When she cited increased debt under Macron, he replied: “Oh dear, oh dear. Stop. you’re getting everything confused.”

Le Pen tells Macron 'stop lecturing me' and 'there's so much here that I'm lost' etc – clearly a deliberate strategy to flag up his tendency to appear arrogant and patronising, but does it also make her look weak?#debatmacronlepen

Despite the flashpoints, much of the debate was muted, even dull, with Le Pen keeping a lid on her temper – unlike the pair’s firey clash in 2017.

Early analysis suggests that the debate was unlikely to have changed many voters minds and polls are unlikely to see a big swing either way.

Macron is favourite to win the run-off, with most polls showing an advantage of over 10 percent, and become the first French president to win a second term since Jacques Chirac in 2002.

The latest poll by Ipsos/Sopra Steria published on Wednesday predicted a solid margin of victory for Macron on 56 percent to 44 for Le Pen.

But analysts and allies of the president have warned the result is far from a foregone conclusion, with polls indicating over 10 percent of French who intend to cast their ballots have yet to decide who to vote for.