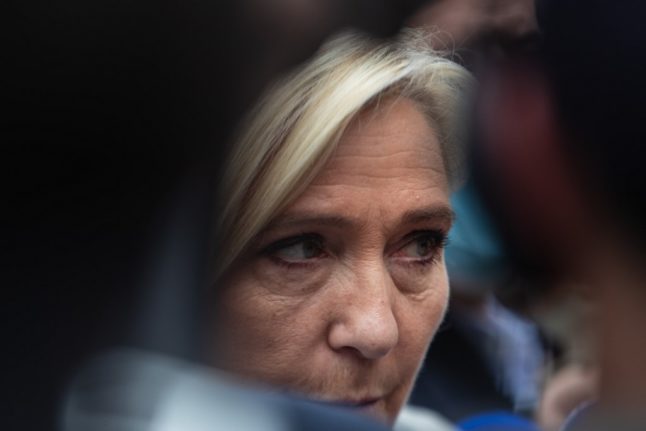 The report said that Le Pen herself should repay nearly €137,000 it said she ‘misappropriated’ during her time as an MEP.

The gist of the allegations is that Le Pen and her party spent EU money on domestic campaigning in France.

Are these new claims?

No. It’s just the first we’ve heard about them. The investigation was opened in 2016 and Le Pen answered an official questionnaire in March last year, her lawyer Rodolphe Bosselut told AFP.

They relate to her time as an MEP – since 2017 she has been an MP in the French parliament.

Wasn’t she already involved in an EU expenses scandal?

That was a different case.

Le Pen was implicated in an investigation over suspicions of employing fictional party assistants in the European Parliament, and ordered to pay back about €339,000 – of which she had some €24,000 held back from her MEP salary. The remainder, Mediapart says, remains unpaid.

The European Parliament has already recovered nearly €800,000 from Gollnisch and Jean-Marie Le Pen in connection with the fictional assistants scandal. The founder of the FN had nearly €300,000 seized from his salary and then from his pension.

So, what does the investigation say?

The report is unequivocal, Mediapart reports. It says the evidence is sufficient “to give rise to criminal proceedings against the former members of parliament […] for the fraudulent acts they committed to the detriment of the Union’s budget.”

Fraud, forgery, breach of trust, misappropriation of public funds for national or personal political purposes, over-invoicing, and even fictitious services for the benefit of companies often gravitating around various far-right groups associated with the Front National (FN, the RN’s predecessor), as well as “conflicts of interest”, were all mentioned.

According to the report, more than €23,000 of promotional merchandise was billed to the Parliament in 2014 but was intended to be distributed to the then Front National’s congress in Lyon.

Le Pen and her father each billed the European Parliament €5,000 for the creation of official EU websites that never appeared.

And, the report alleges that – according to a whistleblower – Le Pen charged €5,000 for hotel and travel expenses of 13 members of her entourage during a symposium on European regions in 2010, but used the meeting to prepare for the party’s presidential elections.

What does Le Pen say?

“So the dirty tricks of the European Union, a few days before the second round. I am very used to that and I think that the French are absolutely not fooled,” she said while on a campaign trip to Normandy.

“I obviously absolutely contest these accusations, of which I was not aware, which already poses a problem in terms of the rule of law, of which I have not been provided with any proof, any element, despite the requests that I amde” added the candidate of the National Rally – apparently contradicting her own lawyer, who had said she had responded to questions last year.

It’s the same theme from her entourage, too. “The French people will not be fooled by the attempts of the European Union and the European institutions” to “interfere in the presidential campaign and harm Marine Le Pen,” RN president Jordan Bardella told Le Grand Rendez-Vous on Europe 1 and CNews, on Sunday, April 17th.

“A crooked move, lies, and verbal violence. I think the Macron team is so nervous that they are ready for anything. The EU is coming to the rescue of its little soldier,” RN spokesman Laurent Jacobelli responded on RMC.

The European Parliament now intends to “proceed for the recovery of the sums unduly paid”, AFP reported one official as saying.

Why does this matter?

The European Parliament’s efforts to reclaim the funds is likely to take time, but the allegations may have an impact on the French presidential race.

Allegations of impropriety are – as they should be – a serious matter for politicians, and the timing, days before the second round of France’s presidential election could scarcely be worse for their candidate at the start of a crucial week – hence the ‘conspiracy’ attack line from RN high-ups.

Set against that, Le Pen has long been hostile to the EU (although, like many other anti-EU politicians that has not stopped her taking large amounts of money from the institution) so her core vote may not be particularly upset at the though of the EU losing money to her.

Polls suggest Emmanuel Macron holds a crucial lead heading into the final days of campaigning, but this election race has been much closer than supporters would be comfortable with, especially as their candidate has been distracted by issues other than campaigning.