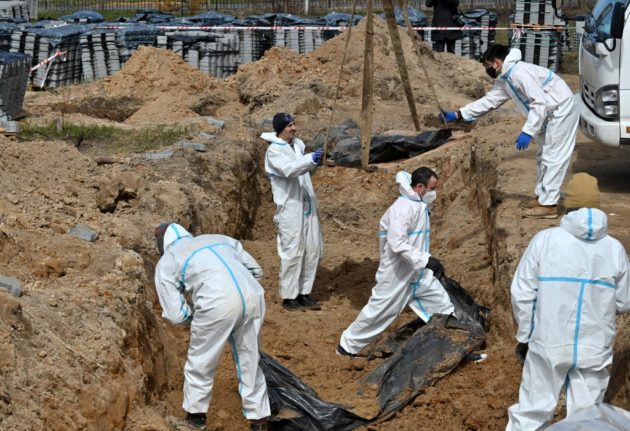 Usually they work in France at the scenes of crimes, natural disasters or road accidents.

Now they are part of a painstaking operation being conducted in areas of Ukraine once occupied by Russian forces that could help piece together a case at the International Criminal Court.

Wearing white jumpsuits or navy blue uniforms and masks to protect themselves from the stench of death, the French officers extract three bodies wrapped in black plastic from the trench in just under an hour.

Each was then placed on an examination table protected from view by a white tent bearing the gendarmerie’s logo.

Inside, six French investigators carried out the first examination.

Their mission is to determine the possible date and probable cause of death: shooting, explosion, fire or even natural causes.

At this stage, that involves a visual examination, capturing photographs and videos and taking DNA samples. This preliminary work takes 30 minutes.

Between each exhumation, the French gendarmes take breaks to drink water or get a breath of air as they consult with Ukrainian colleagues providing logistics and security.

Each corpse is then put back in a body bag and taken in a refrigerated truck for autopsy in a specialised institute.

A mobile French DNA laboratory parked nearby will help identify those found with samples taken from relatives.

Then it is necessary to establish if the bodies bear signs of acts which could amount to war crimes.

The evidence they collect will then go towards assisting local and international investigations.

The violence in Bucha has become a byword for allegations of brutality inflicted under Russian occupation.

Local residents buried the bodies themselves during the bloody siege by the Russian army, which withdrew on 30 March after a month’s occupation.

After their departure, at least 20 bodies of men dressed in civilian clothes, some with their hands tied, were found scattered in the streets.

Since then, several mass graves have been discovered.

The mayor of Bucha Anatoliy Fedoruk says more than 400 bodies have been found since the withdrawal of Russian troops.

The Bucha killings have provoked horrified condemnations from around the world and prompted Kyiv’s allies to impose new sanctions against Russia.

The site of the mass grave where the French officers are working was chosen for its proximity to the local church and morgue, parish priest Andriy Holovin told AFP.

“Seventy bodies were found, mostly civilians, as well as those of a policeman and two soldiers,” explained Ukrainian prosecutor Ruslan Kravchenko.

In a separate grave, marked with a makeshift cross, the bodies of a woman and two children aged 4 and 11 were also exhumed, he added.

“According to preliminary findings, they are the bodies of a family whose vehicle burned after being hit by a Russian armoured vehicle,” he said.