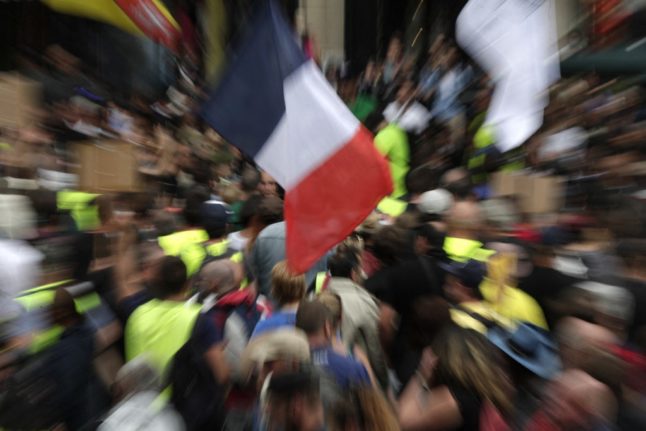 If you’re in central Paris over the weekend, expect to see at least one demo.

The one that is expected to be the largest is a union-organisation demonstration against the far right.

Jointly organised by the League of Human Rights with several unions (CGT, FSE, FSU, FAGE, Unef) the protest is to express anger over the presence of far-right leader Marine Le Pen in the second round of the presidential election.

Numerous campaign and pressure groups have also said they will be attending this, including Greenpeace France, Osez le Féminisme, SOS Racisme, the Cimade, Marche des Solidarités, Extinction Rebellion, Friends of the Earth and 350.org.

Organisers have also called for demonstrations across France.

A march in Marseille is set to start at the Vieux Port at 2pm on Saturday and a demonstration is to take place on Wednesday, April 20th, in front of the Strasbourg central campus law school with the aim of “making the voice of youth heard in the face of the Macron-Le Pen battle”.

Not taking this lying down, the far right have organised a demonstration against Emmanuel Macron – Le Pen’s rival in the second round of the election on April 24th.

The demonstration is organised by Les Patriotes, a group headed by anti-vaxxer Florian Phillipott, who is a former member of Rassemblement National and remains close to Le Pen.

Organisers say the event is anti-Macron and will call on people to vote for his rival.

It starts at 3pm in Place Fontenoy in the 7th arrondissement.

The health pass has been scrapped for almost all venues in France, but a small group of ‘yellow vests’ are still protesting about it.

This demo will start at 11am in Place de l’Italie, moving to Place de la Nation, while a second anti-health pass march will follow the route of the anti far-right march, leaving at 1pm.

The anti-health pass protests have been happening every Saturday since last summer, but although they initially attracted tens of thousands of participants, in recent months the turnout has numbered no more than a couple of dozen.

And finally a march showing solidarity with Ukraine against the Russian invasion will go in the opposite direction, starting at Place de la République and heading to Place de la Nation, on Saturday afternoon.

This has been a regular event since the invasion 50 days ago.