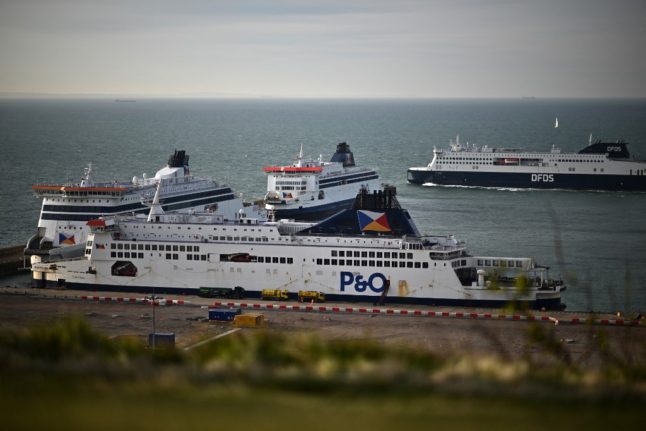 P&O Ferries are currently running no services between France and the UK. Photo by Ben Stansall / AFP

The news comes after a P&O boat was impounded by British authorities on Thursday because of safety concerns.

Issues with P&O Ferries are just one factor in increasingly chaotic travel between France and the UK, with airlines cancelling hundreds of flights due to high numbers of staff with Covid and lengthy waits to get through security at British airports.

Roads in the south of England have also seen miles-long tailbacks of lorries due to Brexit-related paperwork issues.

READ ALSO Easter travel to France: What services are running?

PO has not run any France-UK routes since the announcement on March 17th that it was sacking all of its UK-based seafaring staff and replacing them with cheaper foreign workers.

Initially people with P&O crossings booked were offered alternatives on DFDS ferries, but over the busy Easter period DFDS is unable to take on the extra passengers.

People with tickets booked on P&O Ferries have now been given two alternatives – drive to Hull instead and travel to Rotterdam (which eagle-eyed readers will notice is not in France), or make the journey to Portsmouth and join a Brittany Ferries crossing to Caen.

A P&O spokesman told British newspaper The Independent: “We apologise unreservedly to all customers whose scheduled journeys with us between Dover and Calais have been cancelled whilst we are unable to sail.

“It is only fair and right that we make alternative arrangements for those customers, which include transferring them onto our Hull-Europoort service to Rotterdam, or booking them onto services with Brittany Ferries between Portsmouth and Caen.

“Both of these options are at no extra cost to customers – if anyone chooses either of these alternatives we will reimburse them for any additional mileage expenses incurred and as well as all meals onboard our overnight crossing. Customers will also receive a 25 per cent discount on their original fare.

“We also recognise that these options will not be suitable for everyone, therefore any customer who booked directly with P&O Ferries will be able to claim a full refund and a free trip for future travel.

“We thank customers for their patience during this time and apologise again to those whose journeys have been disrupted.”

This Easter is the first holiday period since the UK government lifted all Covid restrictions in England.

Airlines including Easyjet and BA have cancelled more than 1,000 flights in recent weeks as staff are laid low with Covid. In total 80 flights were cancelled on Thursday.

Meanwhile passengers at airports including Manchester have reported extremely long queues to get through security, also die to staff shortages.

Manchester mayor Andy Burnham has advised travellers to turn up at least three hours before their flight, adding that the chaos is unlikely to be solved in the short term.

Channel Tunnel say that their services are running normally, but are almost at capacity so last-minute bookings may not be possible. The Eurostar service is running as normal.