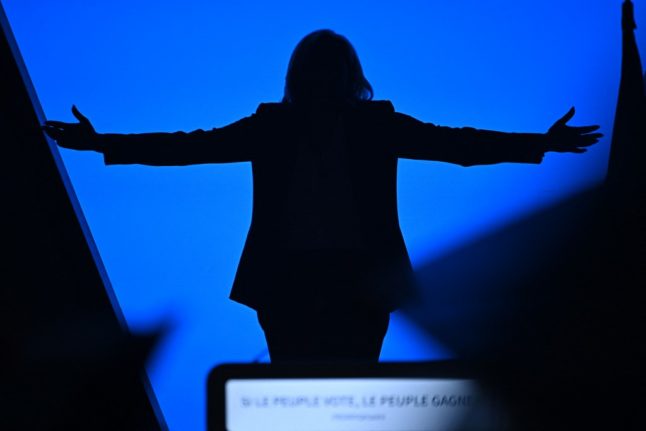 Rassemblement National leader Marine Le Pen has spent years modifying her image and that of her party. Renaming it. Softening it. Taking it, publicly at least, away from the toxic impression of her father’s overtly xenophobic, anti-Semitic far-right Front National.

In 2013, she warned that she would take journalists and media outlets who describe her party as “far-right” to court, calling the term “defamatory” and “insulting”.

She even sued political rival Jean-Luc Mélenchon for calling her a fascist during the 2012 Presidential election. And lost.

The 2022 election campaign has seen a major overhaul in her image – pastel-coloured outfits, Instagram posts about how much she loves her cats and even a softer speaking voice.

Meanwhile her speeches have focused on the issue worrying many French people – the cost of living.

But look behind the empathetic public appearances and cuddly manner to her actual policies, and a very different picture emerges.

Le Pen’s immigration policy, if elected, involves rewriting all of France’s immigration laws to, as it says in her 2022 election manifesto, “preserve French people from migratory submersion”.

Within six months of election she will put an already-drafted bill on immigration and national identity to a referendum – sidestepping oversight from the Conseil Constitutionnel, which cannot examine a law adopted by referendum.

This bill, “will modify a number of articles of our Constitution in order to integrate the migration issue into our supreme text but also to prevent supranational jurisdictions from forcing France to follow policies contrary to the will of the French people,” according to Le Pen’s election document.

Specifically, the bill would remove key parts of the preamble to the Constitution of October 27 1946, which opens with a paragraph including the words, “the people of France proclaim anew that each human being, without distinction of race, religion or creed, possesses sacred and inalienable rights.”

It will also change articles in the 1958 Constitution.

Le Pen’s manifesto continues. “I will propose to the French people … to prohibit any form of settlement that aims to alter the identity of France (notably through family reunification, which will become a rare exception).”

The proposed bill also enshrine in the Constitution the notion of “national priority”, which sets up legal discrimination between French nationals and foreigners for jobs in the private sector, civil service, as well as access to social housing, healthcare and social benefits.

Closely linked to immigration policy, the RN candidate vowed ahead of the first round of voting that she would impose fines on Muslim women who wear headscarves in public. Speaking to RTL radio, Le Pen said “People will be given a fine in the same way that it is illegal to not wear your seatbelt.”

But, in February, she said in a debate on France 2: “I do not intend to attack Islam, which is a religion like any other. I want to preserve its freedom of organisation and worship.”

Why, then, target the head scarf? In doing so by making wearing one a fineable offence, and in separate comments she has created a distinction between Muslim and other religious symbols – running contrary to the country’s 1905 law on secularism and equality of religions.

Meanwhile, Renaud Labaye, her chief of staff, said. “We consider Islamism to not be a religion and that a person who wears the veil is an Islamist.”

In an interview with Le Monde, Le Pen later denied he had said this.

It goes on: “I have tabled a bill aimed at combating Islamist ideologies, which are incompatible with our values, our history and our culture, and which stem from a totalitarian vision of social life.”

Didier Leschi, head of the French Office for Immigration and Integration, is on the record as saying that Le Pen’s bill is worded in such a manner that it should be considered, “a totalitarian text”.

Unsurprisingly, Le Pen’s manifesto is as big on law and order as it is on immigration – key dog whistles of the far right. Quite often, the two are linked – particularly in relation to Islam.

She wants to increase the number of police officers, and arm municipal police in all towns with more than 10,000 inhabitants.

She intends to increase prison places, impose minimum sentencing for a range of crimes, preventing judges from using their judgement, and introduce ‘actual life sentences’, and abolish automatic reductions in sentencing.

And she has said that she would put the question of a return to the death penalty to a public vote – which would set France in direct opposition to the European ideal, its Charter of Fundamental Rights and Protocol 13 of the ECHR.

This week, Le Pen confirmed that her government would not include a ministre déléguée for women’s rights and would replace it with a more junior secretary of State position.

She has long tried to obfuscate her position on certain rights for women, notably on abortion as she sought to modernise and soften RN’s image, while holding on to its Catholic conservative fundamentalist base. But she has, in the past, criticised what she termed “comfort abortions”.

In her 2006 autobiography  À contre flots, she laid down her thinking on abortion, claiming some women use it as ‘a form of contraception, and calling for, “incentive measures, coupled with a real policy of information and prevention with adolescent girls” in order to better “fight against abortion”.

The Osez le féminisme association has placed both her and Zemmour in its misogynist category because of her position on abortion, IVF, and other laws on women’s rights.

Europe and the EU is noticeable by its absence in Le Pen’s manifesto. There’s no mention of a Frexit vote, or a return to the franc as the currency of France. Those policies have been quietly dropped.

But the basis of her immigration policy – and the referendum she plans to hold – runs contrary to EU treaties to which France is a signatory. She claimed recently: “I inscribe the superiority of constitutional law over European law.”

According to her, the Union does not grant enough sovereignty to Member States, including France. Brexit followers will recognise the tone and the words. And she has proposed, and trumpeted in the 2019 European elections, a “European Alliance of Nations”.

Jean-Louis Bourlanges, centrist deputy and chairman of the Foreign Affairs Committee of the National Assembly, has said: “If you affirm the superiority of national law over European law, you no longer have European law.

“Marine Le Pen has given up on an official exit from Europe, but her manifesto is, quite simply, incompatible with keeping France in the Union.”

And Le Pen has said that, if elected, she would aim to “dismantle the EU from within”, and to pull France out of Nato’s command structure.

It starts with flags. One of her first acts, she has said, will be to remove the EU flag from the country’s official buildings. A symbolic act that would be the start of further destabilising efforts – in her manifesto, she even acknowledged her ‘deep and definitive difference of opinion with Berlin’, and said that she would “end the co-operation that began in 2017”.

Because she has focused on homegrown issues such as the cost of living, Le Pen’s links to Vladimir Putin didn’t hurt her election chances as much as it did those of far-right rival Zemmour.

Her campaign had to pulp hundreds of thousands of leaflets when Russia invaded Ukraine because they featured an image of her with Putin.

But, in 2017, she told BBC Newsnight’s Emily Maitliss that her policies were the policies of Donald Trump and Putin:

“The policies I represent are the policies represented […] by Mr Putin”, Marine Le Pen tells @maitlis in this 2017 interview underlining what a triumph for the Kremlin it would be if she becomes France’s president. pic.twitter.com/DGkcrnFENK

And, in an interview the same year with CNN’s Christiane Amanpour, she denied Russia’s 2014 invasion of Ukraine had happened, and insisted the overthrow of the pro-Russia Ukraine government in 2013 was ‘a coup d’etat’.

Following the Russian invasion of Ukraine earlier this year, Le Pen has been careful in her comments about Russia, but she has also said in the past week that she opposes sanctions on Russian gas, insisting that her opposition is based entirely on consideration for French comfort and purchasing power.

“I am not for the lifting of sanctions. I just positioned myself on the sanctions concerning energy, because I do not want the French to suffer the consequences. I positioned myself perfectly for all the other sanctions”, she said on France Inter.

“A person is judged by the company they keep”, goes the well-known idiom. As well as Russia and Putin, Le Pen has an affinity with nations governed by populist far-right politicians, such as Hungary’s Viktor Orban – who is noted for his anti-LBTQ and anti-immigration policies.

She visited Orban in October 2021, and, after securing a €10.7 million loan from a Hungarian bank in part to finance her election campaign this time (having got the funds from Russia in 2017), released a video in support of the Hungarian leader earlier this year.

She is also working to create an ‘alliance’ of hard-right and far-right political groups in Europe, including the Italian Lega Nord, the Austrian FPÖ (the Freedom Party of Austria), the Czech SPD (Freedom and Direct Democracy party), the Dutch Party for Freedom and the Belgian Vlaams Belang.

The inconvenient truth is that, no matter how well she conceals it, Marine Le Pen – by her deeds and her actions, if not the words she carefully guards in the limelight – gives herself away as a die-hard politician of the far right. 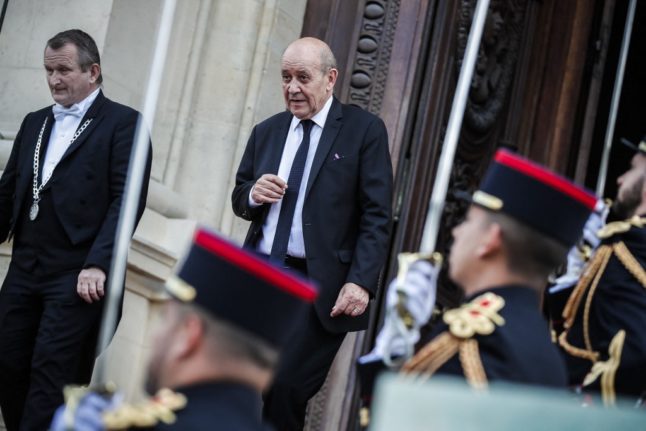 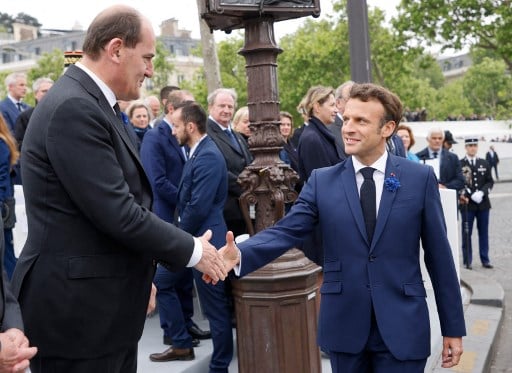 Canberra in September angered Paris by ditching a multibillion-dollar submarine contract with France in favour of a new deal negotiated in secret with the US and Britain.

“The actions taken at the moment when they were taken were of such brutality and cynicism, and I would even be tempted to say of unequivocal incompetence,” he added.

“I hope we can resume frank and constructive dialogue with Australia in the future,” he said, in comments to reporters as he handed over to his successor Catherine Colonna.

Le Drian accused Australia of back-stabbing and the United States of betrayal at the time.

Paris recalled its envoys to both Australia and the United States over the furore. But President Emmanuel Macron later ordered the French ambassador to Washington to return to his post after a call with US President Joe Biden.

Last month it was reported that Australia will be forced to pay up to €3.7 billion to exit the submarine deal with France.