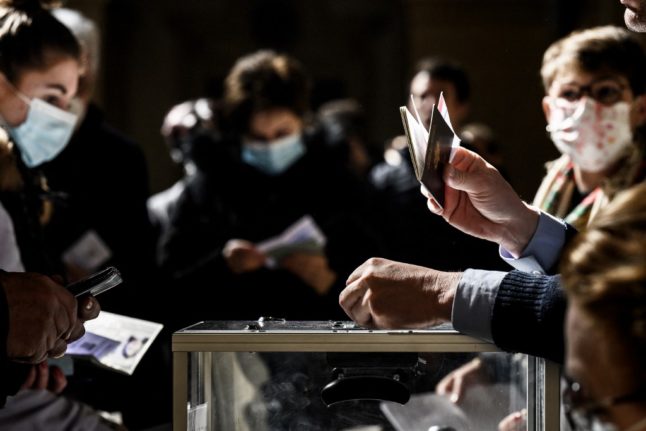 Hooray for the oldies. Without voters of 65 or older, the second round of the presidential election might have been a lose-lose contest for France: “Marine Le Pen versus Jean-Luc Mélenchon”.

Older French voters turned out in huge numbers on Sunday, as they always do. Four in ten of them – 41 percent – voted for Macron. In every other category of age, Macron came second or even third.

The figures cast an odd light on Macron’s four-point victory in the first round of the presidential election. (And it was a considerable victory in my opinion).

Macron is supposed to be the candidate for a modern, forward-looking and prosperous France. He was rejected by the young and middle-aged voters who are the country’s future. He was overwhelmingly endorsed by people whose working lives are mostly over (and who would still be over if Macron lifts the standard pension age to 65).

Extreme nationalism is still offensive it seems to many French voters who were born during the war or in the 1940s or 1950s.  Younger French people are less immunized against the Far Right – especially Marine Le Pen’s dishonest Far Right Lite.

The age-pattern of Sunday’s vote is one of several fragile aspects of Macron’s position as he seeks in the next two weeks to become the first French president to be re-elected for 20 years. Another striking fact is that more than half the votes went to candidates who seek, one way or another, to tear down the status quo.

MAPS: How France voted in the first round of the presidential elections

Only the fact that they are divided between Far Right (31.5 percent of the total) and Hard or Far Left  (23 percent) will prevent Marine Le Pen from making the run-off a successful referendum against Macron, “les elites” and Brussels.

The second round will be a close-run thing. The instant polls put Macron’s lead as low as two points (51-49 percent) and no higher than 8 points (54-46 percent). I believe that he will win.

The second round of French presidential elections stress-test candidates’ qualifications to be head of state in more rigorous way than first rounds. How many people who voted for Le Pen as “that nice woman who is not Macron and likes cats and wants to cut taxes on food and fuel?”. How many had actually looked at her programme for government?

Her economic programme is an incoherent mess.

None of this seems to have cut through – to use the modern jargon – to ordinary voters so far. I expect that it will do so in the next two weeks.

Sunday was a roller-coaster day after a roller-coaster couple of weeks. Early turn-out patterns, including a collapse in the Paris vote, seemed to favour Le Pen, Belgian and Swiss news sites promoted an “exit poll” (illegal in France) showing Macron and Le Pen neck and neck on 24 percent.

Macron’s final score of 27.6 percent was 3.15 points higher than his first round vote in 2017 and the highest for an incumbent since President François Mitterrand in 1988. Le Pen narrowly outpolled her final opinion polls with 23.41 percent but still appeared to have undershot expectations – certainly the expectations of the right-wing UK media – by coming 4.2 points behind the President.

It is worrying, nonetheless, that Macron’s higher-than-expected score has depleted the number of new votes that he can expect to capture in Round Two.

The centre-right candidate Valérie Pécresse – once tipped as Macron’s greatest danger – was reduced to an embarrassing  4.79 percent because her so many of her voters moved to Macron (and maybe some to Le Pen).

Le Pen has another 9 points of far-right support to harvest in round two – the 7 percent who stuck with her rival Eric Zemmour and the 2 percent who voted for the perpetual also-ran Nicolas Dupont-Aignan.

At first glance, Sunday’s voting pattern is unfavourable to Macron. Only 38.7 percent of voters supported candidates who were  clearly pro-status quo.

There is, however, another pattern in the results, which should prove more helpful to the President. The French electorate, as I have been predicting for weeks, has split into three camps.

If you tot up the scores, 32 percent voted yesterday for something close to Macronist, pro-European centrism; 31.5 percent for the Far Right and 32.3 percent for a scattered Left.

Left-wing voters – especially the 22 percent vote for Mélenchon – hold the key to the second round (as it was always likely they would). Which way will they lean on April 24th?

Many more will abstain or even vote for Le Pen than they did in 2017. Hence the poll findings showing a much tighter race than Macron’s 66-34 percent victory last time.

It will deeply pain many left-wing voters to do so but I expect that they will vote sufficiently anti-Le Pen to give Macron a second term. Nor do I expect Marine Le Pen to inherit all of Zemmour’s votes. The future of Zemmourism depends on Le Pen losing on Sunday week, not winning.

And then there are all those sensible, forward-looking old people. Macron’s grey legions will see him home.

Hear John discussing the latest on the results on the Talking France podcast, new episode out now.