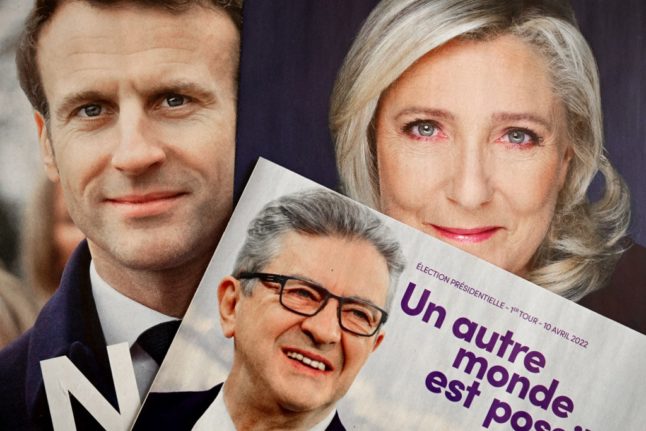 French President Emmanuel Macron was on course to beat far-right leader Marine Le Pen in the first round of France’s
elections Sunday by a larger than expected margin, with the rivals now set to battle for the presidency in a run-off later this month.

Projections showed Macron scoring 28.6-29.7 percent in the first round and Le Pen on 23.5-24.7, with the top two candidates going through to the second round run-off on April 24.

That means the second-round run off vote in two weeks time which will decide the country’s next president will be a repeat of 2017, according to initial results.

Speaking shortly after the results were announced Le Pen called on all those who hadn’t voted for Macron to back her in the second round vote.

She said April 24th’s second round run-off would be reflect the choice between the “society and civilisation” of France.

“I will put France in order within five years,” she told her supporters in Paris, urging “all those who did not vote for Emmanuel Macron” in the first round to back her in the second.

Her cheering supporters chanted “We are going to win”.

Despite entering the campaign late and holding just one rally before the vote, Macron appears to have performed more strongly than predicted by pre-vote opinion polls and won immediate support from defeated rivals for the second round.

“It’s a new campaign that is opening now,” French Economy Minister Bruno Le Maire said after the publication of the projections, which led supporters of Macron to erupt in joy at the candidate’s headquarters in Paris.

Far left candidate Jean-Luc Melenchon was third with just over 20 percent of the vote, whilst far right candidate Eric Zemmour was fourth with 7.1 percent.

Zemmour, who called each of his two million votes “a cry from a people that does not want to die”, urged his supporters to back Le Pen.

In a boost for Macron, he swiftly won the support of the defeated Socialist, Communist, Green and traditional right-wing candidates in the second round.

Melenchon urged his supporters to refrain from voting for Le Pen, but did nor issue a call to back Macron.

The initial scores are based on sample polling stations and are collated by various polling organisations – which means that different media have slightly different results.

The final scores are released by the Interior Ministry early on Monday morning, and while the final percentages are likely to shift slightly it will be very unlikely to affect the overall result.

A pivotal moment in the next stage of the campaign is likely to come on April 20 when the two candidates are set to take part in a TV debate broadcast live on national television.

The final debate has in the past had a crucial impact on the outcome of the vote such as in 2017 when Macron was seen as gaining the upper hand in exchanges with a flustered Le Pen.

The 44-year-old is expected for the next two weeks to put his diplomatic efforts on the Ukraine crisis to one side and focus more whole-heartedly on campaigning in a bid to find the election momentum that has so far eluded his team.

Although her opponents accuse her of being an extremist bent on dividing society, Le Pen has sought to project a more moderate image in this campaign and has focused on voters’ daily worries over rising prices.

But Macron is expected to target her past proximity with Russian leader Vladimir Putin, her plans to radically change the functioning of the European Union, as well as the cost of her economic programme that includes massive tax cuts.