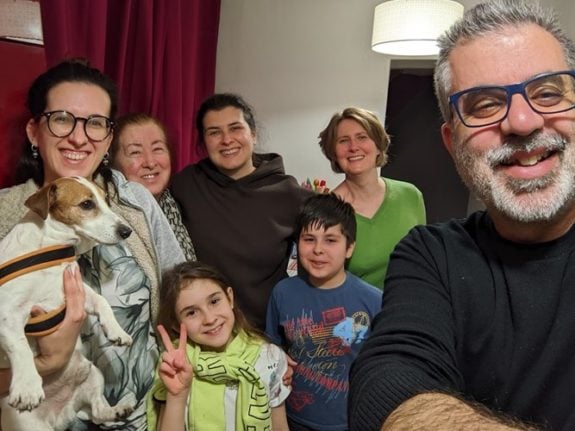 A British couple in northern France are hosting eight Ukrainians who have fled the war. They have shared their experience with The Local. (Source: Nik Haidar/Just Giving)

“My best life, my best friends, my best work, my best home… all of that is in Ukraine. And right now, it is under bombs,” she told an audience in Lille, where she has found refuge.

Initially Iryna wanted to stay in Kyiv to film the chaos, but family circumstances meant this wasn’t an option. She has two teenage daughters. Leaving them in a war zone was unthinkable.

“On February 24th I was woken up by loud noises outside the window. I understood that those were explosions. I went into the girls’ room. I didn’t want to alarm them so I spoke quite quietly. I told them: ‘I’m sorry. I think there is a war starting. You should get your bags together,'” she said.

“My priority was making sure my girls were safe and have a future.” 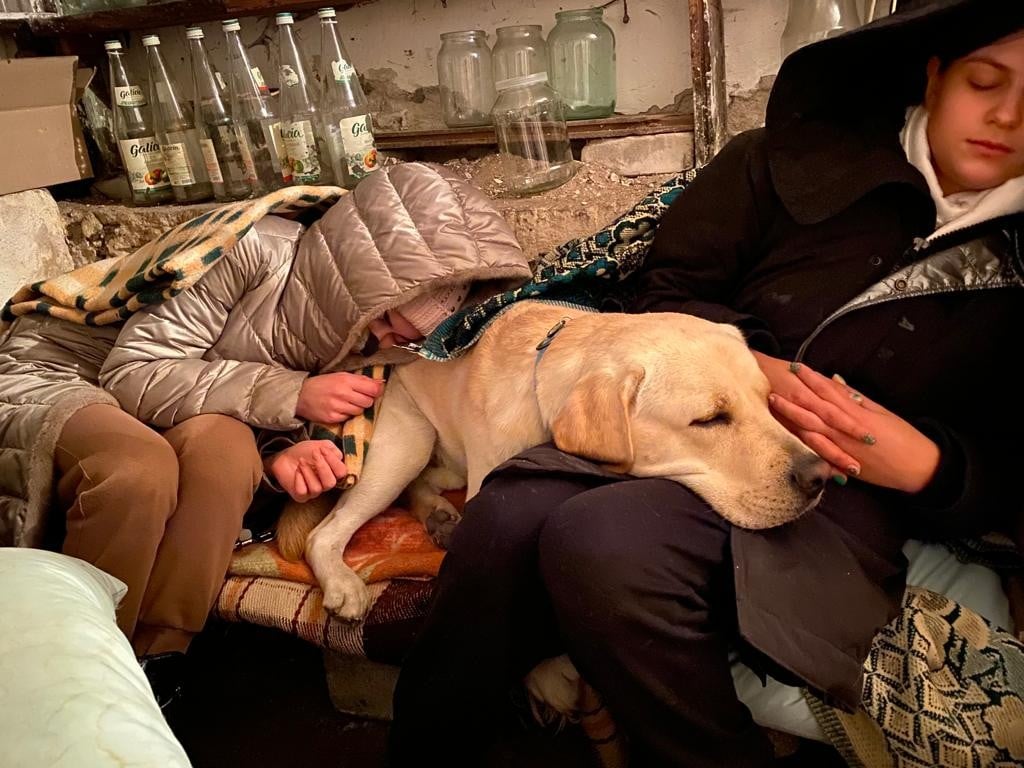 When the bombing in Kyiv began, Iryna and her two teenage daughters sought refuge in the basement – with their dog Snezhok [‘Snowflake’]. (Source: Iryna Vannykova/Just Giving)

The family soon began a gruelling 2000 km journey by road to northern France where Nik and Veronica Haidar, a British couple, had offered to take them in – along with their dog Snezhok. Iryna and her daughters are currently living at the Haidar’s three-bedroom home in Lille.

Nik and Veronica had worked in the former Soviet bloc during the 1990s for the BBC, alongside Ukrainian cameraman Misha – Iryna’s ex-husband.

Five more members of Misha’s family have since made a 16-day journey to Lille where they are staying in an apartment procured for them by the Haidar family.

“Both of us feel that sometimes in life, you have to do something. We’ve been so blessed in life. We kind of think that if the shoe was on the other foot, if we were in that situation, we’d really hope there would be some good people out there that would actually help us,” said Veronica.

“Yes there is a personal cost to us, both in terms of time and resources, but it is nothing in comparison to what these people are dealing with. We can’t solve the refugee problem, there are four and a half million refugees, but what we can do is make a small difference to these eight people.”

Nik and Veronica had a three-stage plan for welcoming the two groups to France. The first priority was ensuring that they arrived safely and had somewhere to rest; the next was getting them registered with the French authorities; and the final, ongoing stage, is to find a long-term arrangement that allows the families to remain in France for as long as is necessary.

The second group of arrivals are currently staying in an apartment free of charge, but the property owner is looking to sell it, meaning the Haidar family are looking for a more sustainable solution.

“There is social housing but the mairie is in a difficult position because they already have a waiting list of existing French residents who are looking for accommodation. They can’t bump people up to the front of the queue,” said Nik.

But the Ukrainian arrivals have needs beyond housing: from phones and internet connections, to slippers, cutlery and French lessons.

“One of the biggest problems is that none of them speak any French. I banged my head against the wall ringing everybody who was offering free lessons,” said Nik.

“These are intelligent, capable professionals. Their frustration is understandable. Now they’re at a place where they can’t even order a cup of tea.”

One of the arrivals, a 16-year-old, has managed to enrol in an international school, where English is spoken – and the Haidar family is paying for someone to provide French lessons to the two groups. Another guest of the family, a trained baker, is visiting a patisserie on Thursday to apply for a job. 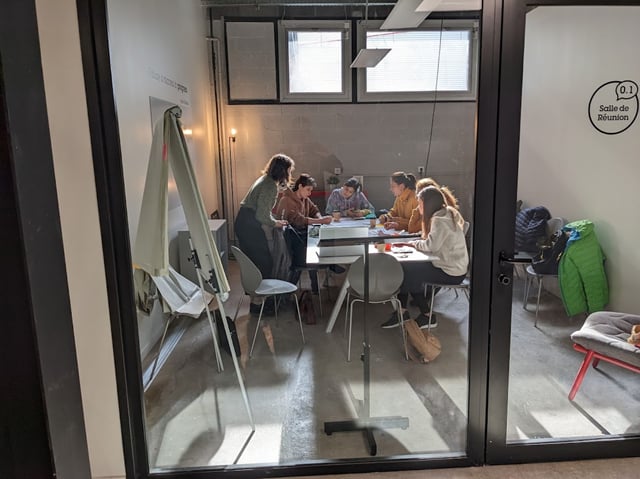 The Haidar family have paid for language lessons to help their guests integrate in France. (Source: Nik Haidar)

Grappling with the French authorities to register and get support has been a challenge.

France has opened up visa-free entry to Ukrainians for up to three years, but people who intend to stay need to register with local authorities in order to access financial support, healthcare and education for children.

“There has been quite a lot of confusion and lots of people running around. It’s a war so there’s confusion. The system works, but you need to be proactive yourself,” said Nik.

After multiple calls and visits to their regional préfecture, the families are now registered officially – with autorisations provisoires de séjour – and will soon receive bank cards with money allocated each month. Official French policy is that the amount paid out varies according to family composition with a single person paid €6.80 per day. A family of ten would receive €37.40 per day, with an extra €7.40 for each adult.

While this financial support is welcome, it will clearly not be enough to cover rent and other expenses. The Haidar family has organised a fundraising campaign seeking to raise £20,000 to find somewhere permanent to stay and cover immediate expenses for the next 12 months. 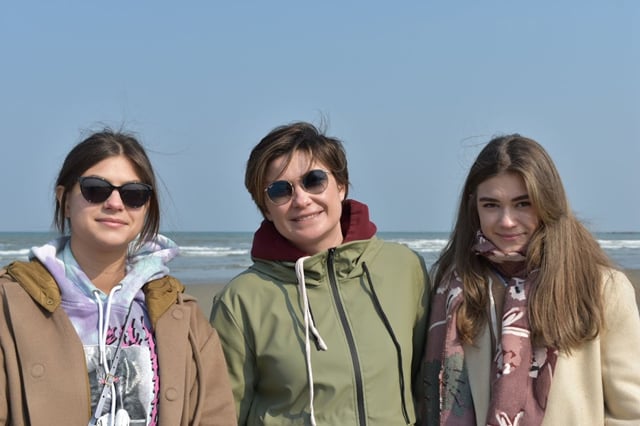 Iryna and her daughters recently visited a beach near Lille. They appreciate the welcome they have received in France but are eager to return home once the fighting is over. (Source: Nik Haidar)

But it is unclear how long the war in Ukraine will continue to rage. Iryna only sleeps for a couple of hours each night and spends the rest of her time scrolling through news websites and asking for news from her husband and mother who remain in Kyiv.

“My mother’s house is okay. She didn’t want to leave. She believes that Ukraine is her country – she wants to live there and die there,” said Iryna.

“When we win, and I believe we will win, we will rebuild, we will put everything back and you will know that Ukraine is the bastion that holds back the hordes that come from the East.”

You can read more about the story of the Haidar family and their Ukrainian friends here. Any support for the families is more than welcome – you can donate via this link.