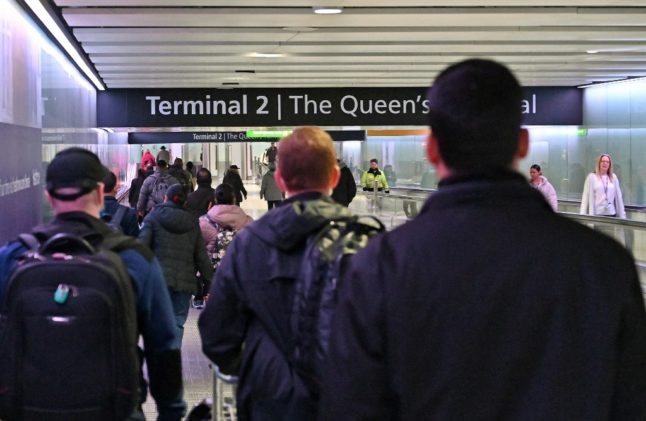 Several UK airports have been hit by delays and flight cancellations. Photo by JUSTIN TALLIS / AFP

Companies including EasyJet and British Airways have been cancelling a high number of flights in recent days, because many of their staff have Covid.

More than 1,100 flights have been cancelled over the past week, including some 200 EasyJet flights to popular European location

If your flight is affected, you will be contacted directly by your airline.

If your flight is running as scheduled, be aware of issues at several UK airports.

Airports including Heathrow, Manchester and Birmingham have been hit by disruption because of staff shortages caused by Covid, affecting everything from airport security to luggage handlers. Passengers risked missing their flights because of lengthy delays, according to reports in the UK press.

Passengers have been advised to make sure they are at the airport as early as possible to allow for delays, and unions have warned that the disruption could last for some time.

In the case of Manchester, the advice is to arrive three hours early.

🚨NEW: GM Mayor Andy Burnham has issued a statement after meeting with Manchester Airport yesterday. He says the disruption is expected to last for the next two months and for the 'foreseeable future' passengers travelling should arrive three hours before their flight #LDReporter pic.twitter.com/UekEyewqPt

P&O ferries may not resume cross-Channel services until “after Easter” – traditionally one of its busiest periods as holidaymakers look to make the most of the two-week school break – after its controversial decision to lay-off 800 members of staff in the UK, according to the RMT union.

National secretary of the union, Darren Proctor, told KentOnline: “The information we have is that individuals have tried to book crossings between Dover and Calais and the earliest they are being offered is April 19th.”

P&O has not confirmed the union’s claims – but they will not be welcomed for thousands of holidaymakers looking to get to France and elsewhere over Easter. And it has been reported that one of its ships, the Pride of Kent, failed a safety inspection, and services on the short crossing are not expected to restart for several days, at the earliest.

This has, obviously, had a knock-on effect on other cross-Channel ferry services.

DFDS is putting on additional services, but has warned it will be operating at close to capacity over the busy four-day Easter period. P&0 has previously said that booked who had booked tickets should go to the port as planned, and head for the DFDS check-in.

However, DFDS has said that it cannot not take any more P&O passengers from April 8th to April 10th – a situation likely to expand into the bank holiday weekend for return journeys.

Eurotunnel is experiencing more traffic than it has since 2019, as cross-Channel passengers and freight have been switching to the undersea service since the start of the P&O crisis. On Monday, one of its freight trains broke down en route to Calais, and needed to be repaired in the tunnel before returning to Folkestone, leading to additional temporary delays.

Normal service resumed later the same day, but – like ferry operator DFDS – Eurotunnel is operating close to capacity. Existing bookings will be honoured, but don’t assume that you will get a crossing if you book at the last minute.

Services are running as normal and there are no reported delays at check-in. Easter is usually a busy period for the rail operator, but while some services are already fully booked, there are plenty of trains still available between Paris and London. Masks are compulsory for the duration of the journey.

There are no Covid-related requirements to enter the UK.

Masks are required on all public transport in France and in transport hubs such as airports and stations. For services running from the UK to France, check the policy with your operator.