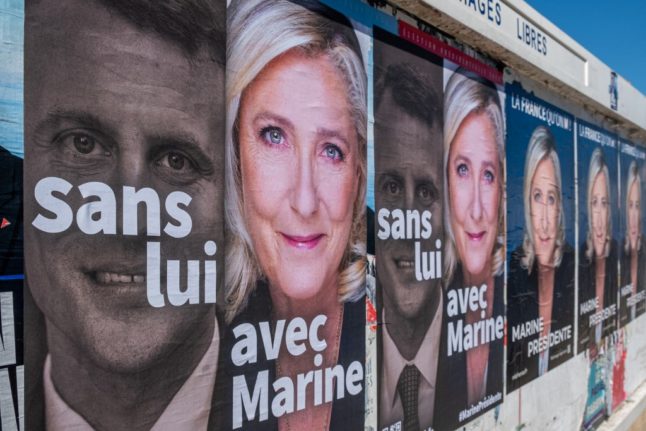 If the polls are to be believed, it’s not beyond the realms of possibility that France will soon have its first far-right leader since 1944 – when Vichy leader Philippe Pétain was ousted.

Barring a big surge from left-wing veteran Jean-Luc Mélenchon, it seems likely that incumbent president Emmanuel Macron will face off against Marine Le Pen in the second round – a repeat of the 2017 showdown that Macron won with 66 percent of the vote.

But latest polling suggests that the second-round battle could be a lot closer than last time, with one poll putting the candidates on 51.5 percent to 48.5 percent.

“We cannot exclude the hypothesis of a victory for Le Pen. Although Macron has a significant statistical advantage, it won’t be a crushing victory like at the last election,” said political scientist Bruno Cautrès.

Edouard Philippe, a former Prime Minister who served under Emmanuel Macron, told Le Parisien last week that he was concerned about the narrowing contest.

“Of course Marine Le Pen could win,” he said.

“Believe me, things would be seriously different for the country – and not in a good way. Her programme is dangerous.”

Why is the race tightening?

The reasons for Marine Le Pen’s surge in the polls are multifaceted.

“This time Macron doesn’t benefit from la prime de nouveauté [being a fresh face in politics]. He was elected in 2017 promising a revolution. There has been an increase in purchasing power but he has disappointed a big part of the electorate – especially the centre-left,” said Cautrès.

“He has not managed to address inequality or the crisis of confidence in French politics.”

The rise of far-right TV-pundit-turned-politician, Éric Zemmour at this election could also play in Le Pen’s favour according to political scientist Luc Rouban.

“Can we even talk about Marine Le Pen as a figure of the extreme right any more? Zemmour has made her seem more moderate. She has worked on her proximity and having a less aggressive tone in the media,” he said.

“Zemmour has taken up themes of the National Front of old, focusing on identity and immigration, while Le Pen is beginning to take up issues like purchasing power – which is a key priority for many people – and energy.”

Le Pen has also been effective at campaigning on social media, attracting more interactions on Facebook than any other candidate last month.

But Rouban believes that “Macronism is not dead” and that the President’s ideological flexibility should be enough to persuade voters.

“He is still in the centrist position. He is an economic liberal but didn’t hesitate to intervene massively in the economy during the Covid crisis.

“He has moved to the right on social issues but this seems to please public opinion – he has isolated Les Républicains [France’s traditional centre-right party]. Even 30 percent of teachers, who normally are big supporters of the Parti Socialiste [the traditional party of the centre-left], are ready to vote for Macron,” he said.

How reliable are the polls?

France votes in two rounds – with voters getting to choose between all 12 candidates in the first round and then the two with the highest score moving through to the sound round.

At this stage – with less than a week until the first round on April 10th – first round polls are generally thought to be pretty accurate. These show Macron ahead of Le Pen on around 28 percent to her 22 percent.

However second round polls are usually thought to become truly reliable only once the first round is over and voters face a real – rather than hypothetical – choice between the two candidates.

“The second round is a different campaign with its own dynamics. It can be affected by the first round result,” said The Local’s political columnist, John Lichfield.

“The country flirts with the idea of a Le Pen presidency and then lurches back,” he told our podcast.

“The fact that people are even talking about Le Pen as a potential winner is going to concentrate the minds of many people out there who perhaps weren’t going to vote and get them to come out reluctantly behind Macron in the second round.”

While this would play into Macron’s hand when it comes to the day of the vote, it could pose difficulties in the long run.

“There was a sense that he was elected by default in 2017 because people on the left voted for him because they didn’t want to vote for Le Pen,” said Rouban.

“Certain sections of society already hate him because of his comments about the French people and his profile as a former banker and high ranking civil servant. There is a lot of mistrust towards Macron and this could lead to big protest movements during the second term.

“If he is only chosen by 30 percent of the electorate in the first round, there will be a feeling that he is illegitimate and this could lead to big protest movements during the second term.”