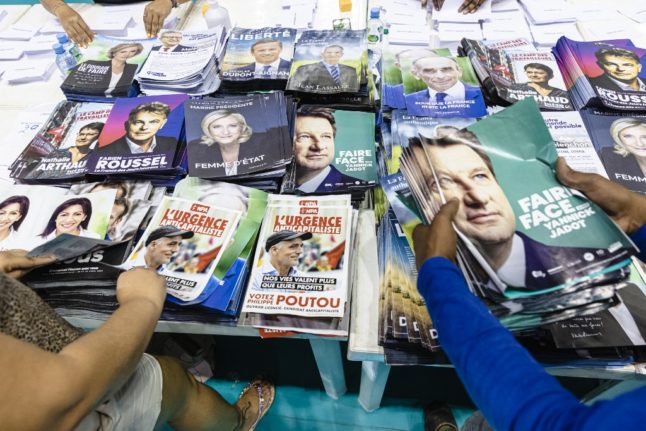 Polling day is by tradition held on Sunday in France, with the theory being that this is the day the French are most likely to be free to go and vote. Unlike some European countries, France does not insist that its citizens vote, but has tried to make it as easy as possible.

Polling stations open at 8am and in most areas close at 7pm, however big cities have the option to extend their polling until 8pm and most have done so, including Paris, Lille, Toulouse and Bordeaux.

The exception to the Sunday rule is some of France’s overseas territories. Territories including islands in the Indian Ocean and the Caribbean are as much a part of France as Paris or Bordeaux, so of course their citizens have the right to vote. However because they are in different time zones, polling opens on a Saturday in some territories so that their ballots can be cast and counted in time for the results in mainland France.

READER QUESTION How does France have 12 different time zones?

Not all polling stations are in French territories – French citizens retain their right to vote however long they live overseas. They have the option to vote par procuration (by proxy) but can also vote in person at one of the numerous polling booths that open up in countries around the world where French citizens live.

Below the French embassies in the UK and Australia publish maps of where polling booths will be located.

When do we get the results?

At 8pm a snapshot poll is published, showing the provisional results and which of the two candidates go forward to the second round.

Unlike exit polls in the UK, this isn’t based on asking voters as they leave the polling station, but is in fact an early representative sample of the result, so it is generally highly accurate.

Once the first 100, 200 or 400 votes are counted – depending on the size of the commune – staff then phone through these results. The phoned-in results are then added together and aggregated and this gives the provisional result.

If the vote looks like being very close, polling organisations have the option to either not declare a result at all, or to only publish the names of the two highest-scoring candidates and not their respective poll scores.

At this stage of the election, it’s only about finding the two candidates with the highest scores, who will go through to the second round of voting, so having pinpoint accuracy on percentage vote scores is less important.

The count continues through the night with updates on the percentages for each candidate and then the final, definitive result is published by the Interior Ministry on Monday morning.

However the accuracy of the early poll means that most people don’t stay up all night watching the results come in, as politics junkies in the UK and USA do.

This is only the first stage of the elections, so the process doesn’t finish here.

The two highest scoring candidates from round one go through to a second round, which is held two weeks later, on Sunday, April 24th.

On this day French voters go back to the polls and vote again for their favourite – or at least the one they hate the least – out of the two candidates.

The process is the same – polling stations open at 8am on Sunday and then at 8pm a preliminary result is published showing the winner.

Most registered voters vote in both rounds, but it’s possible to only vote in the first, only vote in the second or abstain completely. Some voters also cast a vote blanc as a kind of protest against the quality of the candidates.

The winning candidate in the second round just needs a simple majority of the vote.

During the two-week interim period between the two rounds there is a live TV debate between the two finalists – that is scheduled for the evening of Wednesday, April 20th.

There is also the question of backing from the 10 candidates who lost out in the first stage. Candidates are not obliged to back anyone, and some pointedly refuse but others do give their backing and call on their supporters to vote for one or other of the finalists, known as appel a voter (call to vote).

And what happens after the second round?

The current presidential mandate expires on May 13th, so if France has a new president the handover of power must be completed by this date. If the incumbent wins, they simply carry on, although it’s quite common for a newly re-elected president to make some changes to their cabinet at this point.

This year, the presidential elections are shortly followed by parliamentary elections, when the French go back to the polls to elect their local MP to the Assemblée nationale.

At this point the new or newly re-elected president will see whether they can command a majority in the Assemblée nationale (the French parliament) and therefore how easy it is going to be to get their policies and reforms passed over the next five years.

Like the presidential elections, parliamentary elections are held over two rounds, this time with just a week between voting – on June 12th and June 19th.

And then in either April or May 2027 we get to do this all over again with the next presidential election.