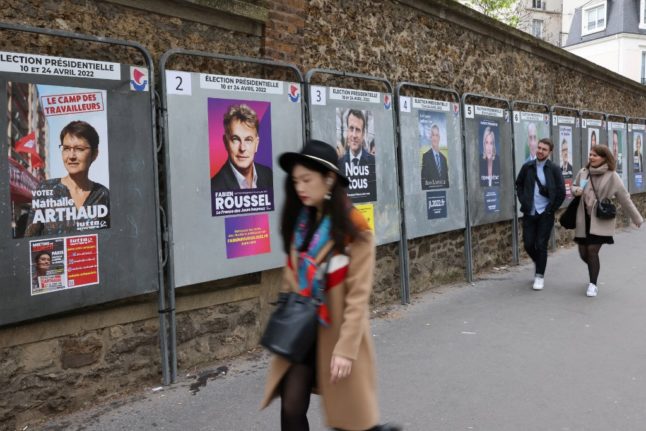 Voters go to the polls this week in France. Photo by Thomas COEX / AFP

Electricity warning – Electricity providers have warned that the cold snap will result in a ‘tension’ around supply on Monday, with consumers asked to limit their electricity usage, especially in the morning.

Election campaigns – this week marks the final week before the first round of voting in the presidential election, so expect to see lots of campaign events from the 12 candidates for the presidency.

Paris-Lyon train launch – the launch of a new service between Paris and Lyon, run by Italian operator Tranitalia. This  marks the opening up of domestic rail services in France to competition, after previously being dominated by state rail operator SNCF.

Paris demo – unions for healthworkers are holding demonstrations in Paris on World Health Day, protesting over pay and working conditions of staff in the health sector in France.

Climate march – climate marches are planned in towns and cities across France under the name Look Up, a reference to the Netflix satire on climate change.

School holidays – schools in Zone B, which covers northern France and the Provence-Alpes-Côte d’Azur region, break up for the two-week Easter holiday.

Election first round – The first round of the presidential elections. Polling stations open at 8am and close at 7pm in most places, although in the larger cities they stay open until 8pm. Preliminary results are announced at 8pm, projecting the two candidates who have got the highest number of votes and will therefore go into the second round on April 24th.