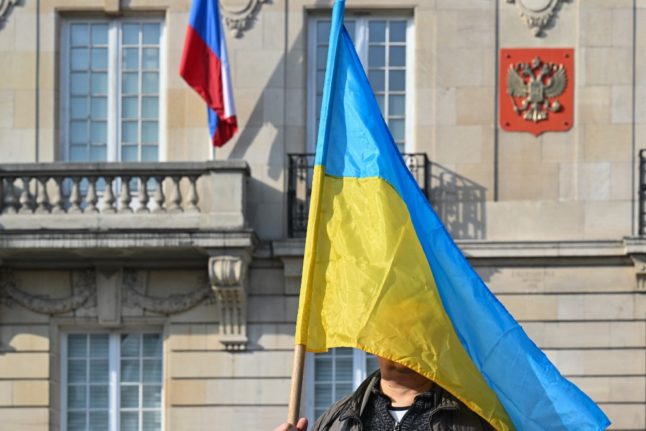 A protester holds a Ukrainian flag during a rally to support Ukraine in Strasbourg, eastern France. (Photo by SEBASTIEN BOZON / AFP)

“Germany, like France, has a strong bias in Moscow’s favour,” Jaroslaw Kaczynski, who is also leader of the ruling Law and Justice (PiS) party, told German daily Die Welt in an interview.

“Over the years, the German government did not want to see what Russia was doing under the leadership of (Russian President Vladimir) Putin and we see the result today,” Kaczynski said.

“Poland is not pleased with Germany’s role in Europe,” he added.

He rebuked Berlin for having sought to rebuild what the former 19th century chancellor Otto von Bismarck “had done… German domination but side by side with Russia”.

The Polish deputy prime minister condemned Berlin especially for failing to deliver enough weapons to Ukraine and refusing an embargo at least on the import of oil from Russia.

“It’s important to know that Russia gets four to five times more revenue from its oil sales than gas sales,” Kaczynski said.

READ ALSO: What would Germany do if Russia cuts off the gas supply?

“We cannot continue to permanently support a great power like Russia by paying it billions,” he added.

Macron has previously come under criticism for his relationship with Putin and their close contact. His dealings with the Russian prime minister in the wake of Russia’s invasion of Ukraine has been one such sore point, according to political reports.

Meanwhile, France and Germany are preparing for a cut in Russian gas deliveries, France’s economy minister said on Thursday, as Putin warned Moscow will turn off supply for those who refuse to pay in rubles.