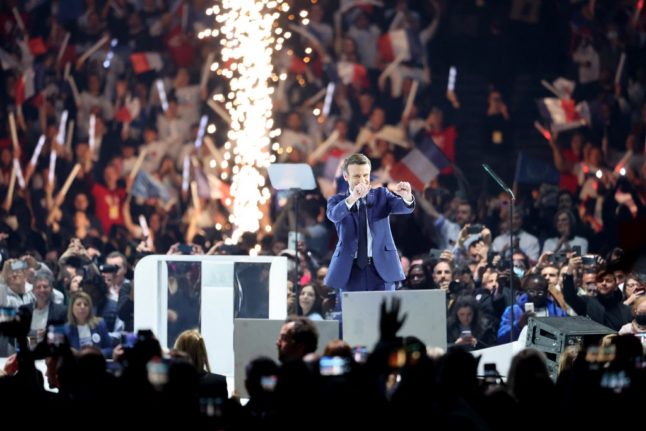 French President and liberal party La Republique en Marche (LREM) candidate for re-election Emmanuel Macron greets his supporters during his first campaign meeting at the Paris La Defense Arena, in Nanterre, on the outskirts of Paris, on April 2, 2022. (Photo by Thomas COEX / AFP)

With just a week to go until the first round of elections on April 10th, Macron and his team pulled out all the stops to rouse voters and boost his bid to remain as France’s president in what’s been described as a ‘rockstar’ campaign rally by international media.

Arriving to fireworks and fist-bumps, Macron addressed a crowd of around 30,000 in Paris’s La Défense Arena – a vast venue that usually hosts top-level rugby and rock concerts.

“Look at what happened with Brexit, and so many other elections: what looked improbable actually happened,” Macron told supporters. “Nothing is impossible.”

“The danger of extremism has reached new heights because, in recent months and years, hatred, alternative truths have been normalised. We have got used to see on TV shows antisemitic and racist authors,” he added.

Macron worked to pull back a share of voters in what was his first rally on Saturday, late in the campaign due to being distracted by the war in Ukraine.

In the meantime, far-right Marine LePen has been gaining ground and making a comeback in the polls, tightening the race and threatening to take what was believed to be Macron’s unassailable lead.

The latest Elabe poll published Saturday showed Le Pen garnering 47 percent of the vote in a second-round run-off against Macron, who was projected to win 53 percent.

Allowing for a margin of error in the poll, this could put Le Pen in the zone to snatch victory.

Although Macron is still just about in the lead, he’s lost some ground in the polls due to his late campaign efforts and his policies on increasing the state pension age to 65.

In his two-hour rally speech on Saturday, Macron touched on topics such as job creation in the healthcare system in a bid to attract centre-left voters, who the polls have suggested may abstain from voting.

And he confirmed his plans to raise the retirement age: “I am not hiding the fact that we will have to work more,” according to a Reuters report.

Referring to opponents such as LePen and far-left candidate Jean-Luc Melenchon, he said, “Don’t believe those who say they will cut the retirement age to 60 or 62 and that everything will be alright. That’s not true.”

However, he did promise to raise the minimum pension to around €1,100 per month if you worked full time, up from around €700 now.

Other campaign promises included a tax-free bonus worth €6,000 for employees to mitigate against the surging cost of food and energy bills due to war in Ukraine.

But will it be enough to maintain his narrow lead in the polls?

Philippe, who is backing Macron, added that “if she wins, believe me, things will be seriously different for the country… Her programme is dangerous.”

Le Pen, who lost to Macron in the 2017 polls run-off, has sought to moderate her image in the last half decade in a process helped by the emergence of Eric Zemmour as a fellow candidate in the far-right.

Meanwhile, the left’s main hope is the far-left candidate Jean-Luc Melenchon who most polls project coming in third place but believes he has a chance of making a run-off.