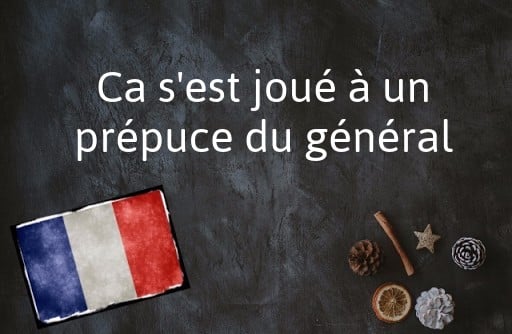 Because sometimes you need to liven up politics with a crude but amusing phrase.

This literally translates as ‘it came down to the general’s foreskin’ but it really means a close-run thing or a very narrow win or loss. In English we might say that someone won or lost ‘by the skin of their teeth’ – ie by a truly tiny margin.

This phrase is often used in a sporting context and can be applied to elections too, although they tend not to use it on TV news coverage, since it’s clearly NSFW. As should hopefully be clear, it’s not one to wheel at during politics chat over lunch with your French in-laws.

Its etymology is slightly convoluted so bear with us.

First of all ‘the general’ in France can only mean one person; Général Charles de Gaulle, saviour of the French nation during WWII.

But it seems that his soldiers and, later, his resistance fighters were less respectful towards the great man – observing that his plans often seemed to come off at the last minute and then seemingly by accident, producing some very narrow victories.

They began to use the phrase ça s’est joué à une bite du général – that came down to the general’s penis – invoking both the last-minute nature of his planning and also implying he was less than well-endowed. We couldn’t possibly comment.

Either way, the phase made its way out of military circles and into the wider population and remains as a lasting linguistic tribute to the General. Albeit possibly not one that he would have wanted.

* Did you get the fish reference? Well done! This is of course a poisson d’avril – the French version of an April fool.

While WWII soldiers and resistance fighters undoubtedly had plenty of crude phrases, as far as we know none of them involved the intimate anatomy of Charles de Gaulle, who by all accounts was a very competent planner.

French does have a genuine rude phrase for a close-run thing ça s’est joué à une poil de bite – that came down to a dick-hair. Don’t believe us? Here’s former prime minister Eduoard Philippe using it, albeit clearly filmed unawares.

We do have a lot of entirely genuine French words and phrases in our Word of the Day section – check them out here.